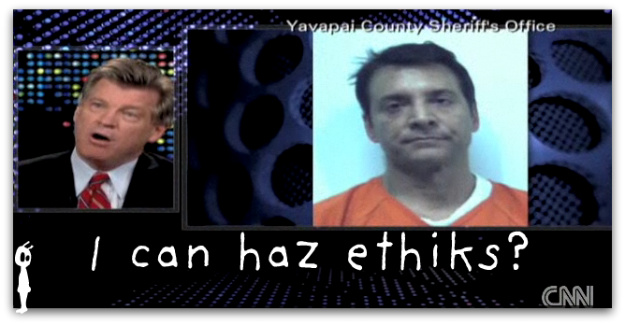 On February 4th :: Ray’s attorney Brad Brian made an appearance on Larry King Live. He was quite a ChattyKathy. ChattyKathy must have been excited about being on TV. It’s said :: by sayers of things :: that television cameras add ten pounds to big egos :: but Brad seemed to swell by at least twenty-five. Swellings often correlate negatively with decision making skillz.

A PR appearance on national television so shortly after the commencement of a criminal proceeding is inappropriate. Very inappropriate. Walking through the grocery store naked and covered in milk inappropriate. But this was more than your average milk covered dalliance :: the Larry King show was directly involved with the lead-up to the tragic events in Sedona. Ray’s multiple appearances on King’s show helped to propel his Death Star. Worse still :: King’s executive producer Wendy Walker {pictured here} is rumored to be :: or have been :: a devotee of Ray and The Secret. So before Mr. Brian had squeezed a single word out of his swelled cake hole … he was skating on thin ethical ice.

Oh but then he opened up his mouth … and the disaster really got going.

Lawyers :: along with making blush worthy sums :: have special ethical obligations over and above those imposed on regular Jane and Joe Blows. Like so …

California Rule of Professional Conduct 5-120(A) ::

“A member who is participating or has participated in the investigation or litigation of a matter shall not make an extrajudicial statement that a reasonable person would expect to be disseminated by means of public communication if the member knows or reasonably should know that it will have a substantial likelihood of materially prejudicing an adjudicative proceeding in the matter.”

So don’t say anything to the press that could have an adverse effect on the fairness of the trial. Duh! But what counts as “materially prejudicing an adjudicative proceeding?” Well the notes to the rule {which are considered almost as important as the rule itself} offer some not too subtle hints about the kinds of BS you should definitely not be saying …

“What I think it means is that the people who went to this are, are largely, uhm, professionals, uhm, I’m not saying that they’re rich folks … but they’re, they’re people that are not duped. They’re people who make voluntary choices. They’re looking for the kind of balance, the kind of motivation that James provides.”

First of all :: Balance is Bogus :: read some of your boy’s crap. Second :: participant state of mind is a “material fact in issue” … and ChattyKathy’s opinions on the subject ain’t admissible. Assumption of prejudice.

Larry King :: “Were any people psychologically pressured not to leave?”

Brad Brian :: “There was encouragement but no compulsion, everything was voluntary.”

Come on! Seriously? Brad Brian is qualified to make that complex psychological determination? Nope :: no effing way. Only an expert who meets strict and formalized criteria would be allowed to answer a question like that. Inadmissible and prejudicial to a material fact.

That is the big one :: the mother ship of don’ts. Don’t do it ChattyKathy …

“When this thing happened, he immediately reached out to the families.”

“But when they found out there was a problem they called 911. He and his team tried to take care of people … James himself was holding an IV and was trying to help until the authorities detained him.”

Nope :: false. It happened nothing at all like that.

Larry King :: “Had he done these before?”

Larry King :: “No incidents before?”

Brad Brian :: “He had one I’ll call it, I don’t want to call it minor, but one incident in 2005 where a gentlemen became somewhat disoriented.”

Nope :: false and deceptive. Plus … mucho ridiculouso. That gentlemen may have suffered permanent brain damage. He’s lost almost everything … to include his wife :: job :: and money. He came out screaming :: throwing wild punches :: and performing super human feats of crazy. There were many other documented :: and horrifying :: incidents over the years … up to and including 2008.

“The notion that he somehow abandoned people, he didn’t.”

The comments to ABA Model Rule 3.6 provide additional guidance to …

“certain subjects that are more likely than not to have a material prejudicial effect on a proceeding, particularly when they refer to a civil matter triable to a jury, a criminal matter, or any other proceeding that could result in incarceration.”

“James Ray, I’ve gotten to know him, a lot. And I can say this, he thinks about those three people every minute of every day since October 8th. He does. He’s devastated … and I really mean that.”

Speaks clearly to his character and credibility. And as a bonus … it’s hyperbole which is per se false and deceptive.

And now to the second mother ship …

(4) any opinion as to the guilt or innocence of a defendant or suspect in a criminal case or proceeding that could result in incarceration;

Makes sense right? A lawyer can’t be pleading his clients innocence in the mass media. It threatens the sanctity of the judicial process … and thus The Constitution … a kind of important document that members of the Bar are sworn to uphold.

This is where supposed “top” lawyer Brad Brian really spreads his wings and crashes ::

“This was a tragic accident, nobody … nobody … including James, could have foreseen consequences anything like this. And remember, these people, who died, were his students and his friends.”

The foreseeability of the consequences is THE WHOLE CASE in a manslaughter trial. Manslaughter = recklessness. Recklessness = foreseeable but you just had to do it anyway.

James Shore and James Ray were friends? Somebody better tell that to the truth.

“He did not expect anything like this, nobody did.”

“The defense is that this is a tragic accident. That that, nobody, certainly not James, did not foresee consequences like this. He took, as I said earlier, he took safeguards that, as far as we can tell, are, are go beyond other sweat lodges.”

“This should not be a criminal case. This was an accident.”

As just one final cherry on top of this ethics violating smörgåsbord … ABA Rule 3.6 :: Comment [6] …

“Another relevant factor in determining prejudice is the nature of the proceeding involved. Criminal jury trials will be most sensitive to extrajudicial speech.”

Well isn’t that special? It’s a literal textbook case of the worst kinds of extrajudicial speech. Mr. Brian and his flunkies will argue that they had the right to “make a statement that a reasonable member would believe is required to protect a client from the substantial undue prejudicial effect of recent publicity not initiated by the member or the member’s client.” Rule 5-120 (C) However :: that same rule also states that “a statement made pursuant to this paragraph shall be limited to such information as is necessary to mitigate the recent adverse publicity.

{a} usually a response is only “required” to counter inappropriate public comments made by the prosecutors or law enforcers whose opinions :: like the defense attorney’s :: the public will tend to lend more credibility than other parties who are apart of the debate {like me!} … the counter party in this litigation has made virtually no public statements … and has certainly not said or done anything prejudicial that “required” a response.

{bee} a “required” response must be proportional. A twenty minute sit down with Larry King could only be an appropriate response to the national media coverage of the matter. James Ray is a fake guru :: not a national hero like The Juice. The national coverage up to Feburay 4th had been sparse :: mostly timid :: and fair. Munger Tolles & Olson :: and James Ray :: were given a chance to comment on most {if not all} of the stories.

Immediately following this bizarre display of ethical :: and moral :: ineptitude … prosecutors filed for a gag order. Gag orders aren’t supposed to be required anymore because their essence has been codified into the rules of professional conduct. But ChattyKathy obviously doesn’t care about being a professional :: and can’t be trusted to keep his yap shut..

Judge Darrow took the matter under advisement and reminded attorneys “to comply with ethical rules that govern their conduct.”

Indeed. Or at the very least :: don’t flagrantly violate them as though they don’t exist.

The Salty Droid refrained rage on this matter out of respect for having respect for things. But recent irritating events seem to call for a re-evaluation of who exactly is deserving of respect.

Since Death Ray’s release on reduced bail :: after disclosures about his unimpressive finances :: he has continued to sell his unicorn dreams. He has bombarded the Internets with messages of his secret knowledge :: just unattainable :: available at high cost. His message continues to completely ignore the existence of his victims :: their humanity :: and the very real effects of his actions. His only concern seems to be salvaging what’s left of his sinking guruhood.

Someone has to take the dirty job of defending this vile stain in court. Inside the court :: Brad Brian should do everything he can to keep the State from introducing into evidence what happened to Colleen in San Diego. If the pattern of hostile abuse is shown for what it is :: Ray has no hope of acquittal :: so fair play fighting its admission. But outside the court :: a professional {and/or a decent human being} has the moral obligation to realize that something did happen to Colleen. She died because of a sickness that permeates every last sinew of James Arthur Ray’s coercive sales techniques. He continues to take risks with the lives of others :: he continues to cash checks written in anticipation of services that he can’t :: and never could :: actually render. 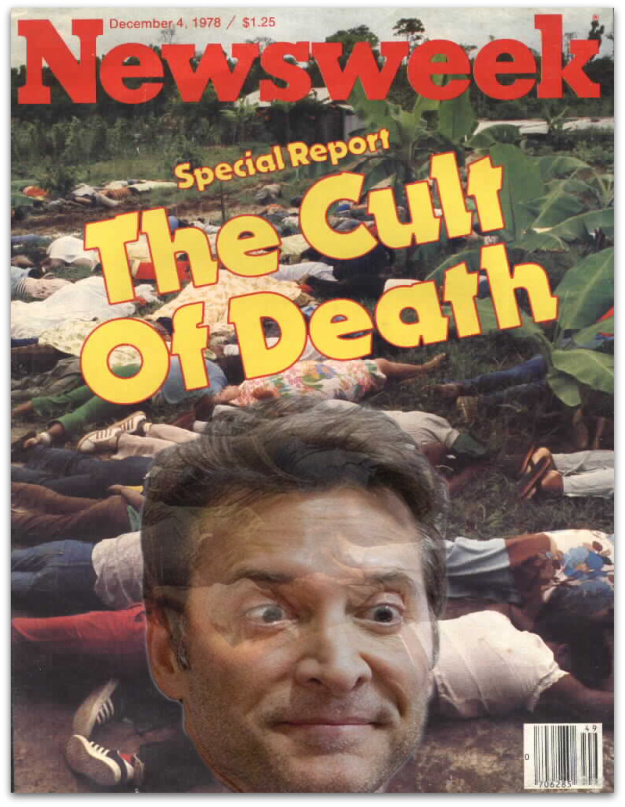 At least four people have died :: and there could be more before it’s all over. MTO attorneys don’t want witnesses using the word “Jim Jones” in court. Fine. But Jim Jones was a real dude :: and there are real corollaries. The kool-aid ugliness happened only after Congressman Ryan was killed :: the point of no return. How will Ray react if he begins to realize that he is doomed? I don’t know :: and neither does Brad Brian.

Mr. Brian’s appearance on Larry King :: speaking to Ray’s long targeted demographic :: felt more like business PR than justice :: like he too had a concern for preserving James Arthur Ray’s guruhood. The legal defense of an objectively obvious trouble maker calls for extraordinary care :: and that’s not what’s being shown.

Any concerned citizen can file a complaint with The State Bar of California Attorney Discipline System about possible ethical lapses of its members. Investigations into ethical violations can lead to stiff sanctions :: including disbarment. I have just filed such a complaint against Brad Brian.

If you are in some way party to this matter :: then stand clear of this inflammatory action. But if you are a neutral :: and you’re concerned about Death Ray’s ongoing activities and the moral and ethical propriety of his attorneys … then I enthusiastically encourage you to file a complaint with the State Bar as well. Here’s the form … with some of the confusing details already filled out for you by a certain robotic superhero …

The instructions request “no arguments.” They don’t need help deciding the outcome … so simply state the rule that you think may have been violated {5-120} … and list off a couple {not all} of the statements you think serve as good examples of the violation. Sometimes shorter is better.

In spite of serious concerns about the tragic :: and possibly dangerous :: context of the case … the attorneys at Munger Tolles & Olson seem to think they’re going to play extrajudicial hardball. That’s fine by me :: softball is for lesbians.

PS: This post was brought to you free of profanity by the good people at the Red Fork Church of God in Tulsa :: who remind me that :: “One can be humorous with a sarcastic witt without the bad language. Give it a try!” :: Consider it tried!