Of Bail and BattleGrounds 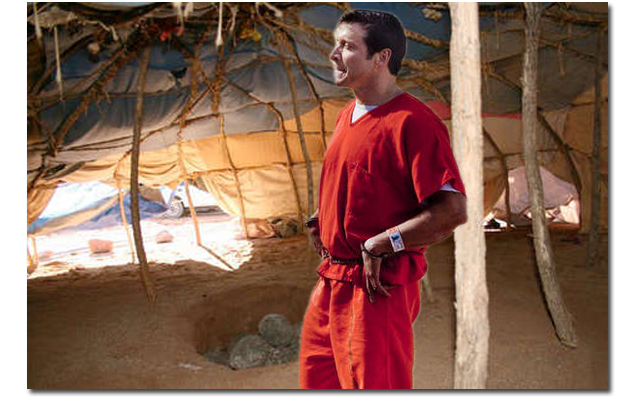 Will James A. Ray Finally Get Out On Bail? … asks Lynne LaMaster of Prescott News. The hilarious answer :: probably not. The hearing on reducing Death Ray’s bail to levels that won’t have delicate flower Luis Li squealing for mercy was scheduled for today :: but there is a tiny problem …

“For a while, it appeared as if today’s hearing might also be cancelled, according to Ray’s defense attorneys. Kelly explained that an agreement was reached last week with the County Attorney’s office for a deeply reduced amount of bail, but Ray was unable to qualify with the bond surety company for even the negotiated lower amount. Kelly noted that it is a typical practice for bonding companies to appraise personal assets and real estate at a discounted rate in circumstances such as this, and apparently that policy is creating difficulties for Ray.”

Oh that’s so sad. I really do hate to hear about people having difficulties. Head up big guy :: energy flows where attention goes. Just close your eyes :: squeeze your sagging old man ass cheeks together :: and try to demanifest your profligacy of the last decade. Good luck with that.

Not everyone agrees that Ray is broke. The Anticult on the Rick Ross forum has been particularly on the rag about how wrong I am.

James Ray precisely copied and refined the most effective and powerful LGAT seminar techniques in the industry from others who had designed and tested them for decades.

Of course he also copied and modeled their financial protection techniques, to make certain the millions were instantly drained and protected, simply by hiring the same experts used by others.

Substantial revenue streams :: and even large profit margins :: mean nothing unless you understand the underlying debt structure {*cough* Lehman Brothers *cough*}. If your life is built on a facade :: then often the only thing keeping you from a total debt crisis is yet more debt. For all we know James Ray International could have been saddled with several million dollars worth of debt before his infamous Oprah appearance :: and keep in mind that James Ray has only been a fake big deal for 5 years.

But I’m inclined to agree with Yakaru ::

I don’t know whether Ray had money stashed, but it seems to me likely that he did. I also think its highly likely that he squandered a lot of what he did make and was totally unrealistic in his planning, as Droid suggests. I think Ray is a rather stupid man who is using a scamming model that is quite highly evolved and developed by others. I bet he used it, but probably just as stupidly as everything else he’s done.

Señor Reporter points to another interesting problem that Death Ray has :: ALL of the sweat lodges {and many of the other intensive seminars} between 2005 and 2009 had victims. Arizona authorities have brought three totally balls to the wall manslaughter charges :: but there are dozens of lesser offenses that could be brought. Quoting Sidney Spencer’s attorney Ted Schimidt …

“There was reason to believe they were considering filing several counts of endangerment,” Schmidt continued. “Perhaps they will use endangerment down the road as part of a plea bargain. They definitely could charge him with endangerment—the facts support it.”

Speaking of people who’ve been fucked over by James Ray’s “lesser” crimes :: Tom McFeeley posted the transcript of Lou Caci’s police interview. Lou was the poor bastard who burned his hands in the pit of ornery grandfathers :: but then went back in anyway. Part of the reason Lou went back in was to help Linda :: who was struggling …

Lou Caci: Yeah, my wife was on the right seat and on my left was, her name was Linda she is a heavy fat woman … I don’t know how I did it I mean I had another gentleman Randy help me from behind and I grabbed (Inaudible) and I was lifting her just using all my strength that I had and I was moving her. She weighed close to as much as me.

Det. Surak: And you probably saved her life.

Damn Lou :: ease up on poor Linda :: just cause you saved her doesn’t mean you need to be a dick about it.

You know who is a chunky monkey though? James Arthur Ray … 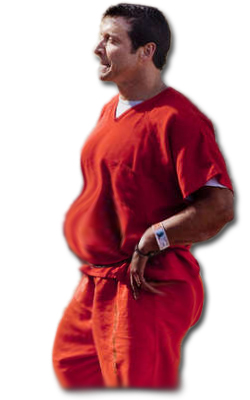 … nothing balloons out your Ass & Moobs like a couple of weeks off the roids.

Take us out Lou :: and don’t hold back :: holding back is for fat chicks …

“Well (Inaudible) the areas and I was shocked after especially when I saw people puking and people laying on the ground and like it’s supposed to be a positive experience, you know it’s not supposed to be a fucking battleground but that’s what it looked like.”