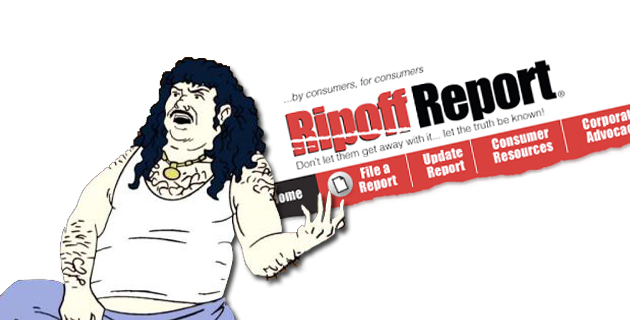 I’ve recently noticed that there are a lot of scams out there. Surely there is something we can do about it! At first I was like: “I should definitely send a letter to the Post Master about all this.” But then the Surgeon General warned me that the Post Master might cause cancer of the fetus … and then I was like: “Wow! Fuck that!” I just can’t afford to take the risk right now … my fetus runs my entire laundry and dry cleaning operation.

So I guess I’ll just register and file a couple of complaints over at the RipOff Report :: where eater of whole sticks of butter Ed Magedson advocates for consumers by lining his own pockets {probably __with butter!}.

Body: Recently I’ve been visiting the various websites of Xcentric [sic] Ventures LLC. The sites claim to be “by consumers, for consumers” :: and so I was spending a significant amount of time with them … being one with the consumer. But now I have discovered :: to my infinite dismay :: that the sites are actually by and for one Edward Magedson … and have NOTHING to do with protecting the consumer. My time has been raped … or at the very least burgled … and I demand justice!

Don’t tread on me.

Mr. Magedson :: who is often described as having a faint “fecal musk” :: allows defamatory content to be published on his flimflam websites :: and then accepts payment to help mitigate the damage caused by the defamation. It’s low enough to make rats vomit. Furthermore :: and forthwith :: Ed Magedson defiles the users of his sites by whitewashing and devaluing their genuine criticisms of suck companies … as long as Ed has got his little taste of the money pot.

Something MUST be done to stop this butter filled madman! Write your congress woman today!

P.P.S. Thanks to the RipOff Report. I love this site. It’s a real service to the community.

Link to be provided upon availability :: FreeSpeech?