An Asshole Decors My Eyeholes 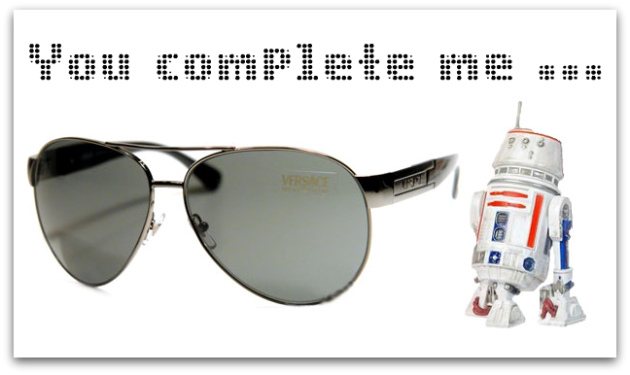 If you’re not wearing Versace 2049 Sunglasses :: then you are shit. I know it’s harsh :: but seriously :: you are one of the dirt people. When the plague comes {and it will come} :: you will be the first to die … because the plague respects $300 fashion accessories.

If you search The Google for “Versace 2049 Sunglasses” :: the top result is a little ma-and-pa operation called Decor My Eyes.

The awesome thing about Decor My Eyes is that they might :: to summarize a recent New York Times article :: overcharge you for fake frames that they’ve pissed on and then pretend to stalk you until Citibank agrees to give them whatever they want.

“do you think I would think twice about urinating all over your frame and then returning it? Common.”

“Then, she said, he threatened to find her and commit an act of sexual violence too graphic to describe in a newspaper.”

I wonder if it had anything to do with bunghole borscht? I hear crazy Russian freaks are totally into that.

When the New York Times showed up at Vitaly’s Brooklyn door to ask him why he was getting pee all over the place :: he was wearing a T-shirt and some opportunity pants™ …

“I slept in for the first time in a while,” he says.

Definitely. I totally believe that.

He then proceded to explain how he uses flaming-dickhole type actions as an SEO strategy. See if someone asks for a refund on some sunglasses :: and you send them a Google Maps picture of their house that says “I’M WATCHING YOU!” :: then they might complain about that on some online forums and you’ll suddenly rank first for Versace 2049.

It’s not the best plan … let’s be honest. It’s more like the piss poor excuse of an asshole with a vodka hangover. But the Times thought they better call Google and check out the viability of this DickHole SEO approach …

“A crucial factor in Google search results, the spokesman explained, is the number of links from respected and substantial Web sites. The more links that a site has from big and well-regarded sites, the better its chances of turning up high in a search”

“Actually, the reason DecorMyEyes.com ranks for “Versace 2049 Sunglasses” is that they got a link to the appropriate landing page, from a reputable site. Specifically, they got linked by the New York Times.”

Oh snap! An NFL blog on their website mentioned Steelers coach Mike Tomlin peering out over his Versace 2049’s … and they anchored it to the DecorMyEyes sales page. I guess sometimes you can get links without involving urine or sexual violence to borscht.

That’s one of the big/funny problems about SEO that makes the The Droid want to mostly ignore it. Search is a huge flaming math problem … and Google refuses {for good reason} to show its work. It’s like I just did a complicated calculus problem … and the answer was 7 … please explain the processes that I used. You can make some educated guesses … like it was probably done in base ten … and didn’t contain any imaginary numbers. But basically :: you don’t fucking know.

Of course Google gives more than zero hints about its calculations :: and there are some people with genuine expertise in the subject :: but The New York Times and Vitaly Borker are not among them.

Even though it’s hard to blame Google for the actions of a crazy piss flinging Russian in Brooklyn :: they did respond with a change …

“We developed an algorithmic solution which detects the merchant from the Times article along with hundreds of other merchants that, in our opinion, provide an extremely poor user experience.”

Awesome … I can think of a few “merchants” like that myself. But if it works then Borker will just go back to using Adwords to buy his traffic :: probably what he was doing anyway. If “extremely poor” merchants get demoted in organic :: but are still allowed to buy traffic via PPC … then I’m pretty sure no problems have been solved.

Rules only matter for the people who follow the rules.

The DecorMyEyes site is cookie-cutter and gets very little traffic. It can’t be the only thing Borker is up to or he wouldn’t have enough money to buy borscht to shove up his ass.

Perry Belcher ran a fraudulent health cures business for almost a decade. He had dozens and dozens of websites and more than 60 different fraudulent health products. But each of the sites and cures shared something in common … writing. Scammers are lazy. Perry used the same exact fraudulent claims {and numbers} across all his different scams. Writing is harder than sitting on the couch scratching your balls … so scammers no like to do it.

“Sometimes its hard to shop on the internet for items.”

It’s not just wrong … it’s atypically wrong. It’s grammatically incorrect … but it’s also strange … so it’s perfect. Put that bitch into quotes and run a Google search for other sites that are just as strangely dumb.

Search for the name of your favorite gay French frames … and you’ll see a Google Ad for one of these “companies”. They all have different names and addresses :: but you can bet your kitty whiskers that the piss flinging borscht fucker is the sweat pants behind the wizard curtain in each instance.

The DecorMyEyes homepage claims that …

“We have a lab onsite that will fill virtually any prescription order from single vision to no line bifocals.”

But that’s not true.

“Every pair we sell is guaranteed authentic”

“The number one goal, to satisfy all customers, is accomplished by providing the largest selection of products at the lowest possible prices, delivering products in a timely fashion, an automated and bar coded warehouse and an in-house customer service center.” 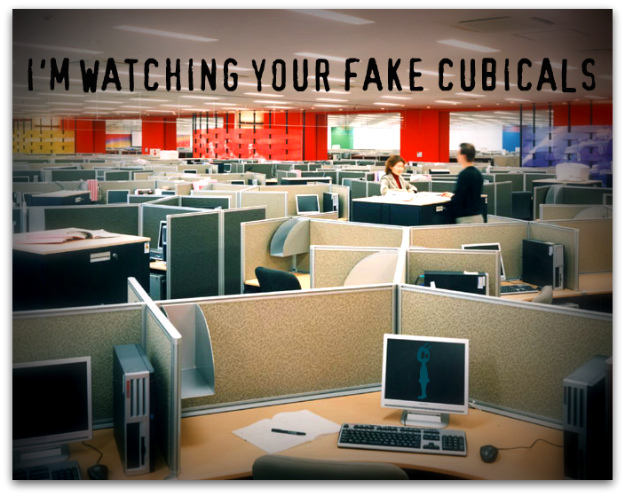 It’s fraud. Fraud has to be stopped with handcuffs … and jail time. The Internet is not some new fucking la la land where criminals can be defeated with nerd equations.

I’m all for making things tougher for scammers in general … but at some point individuals need to be singled out … heads stuck on spikes. That has a much more permanent scarring effect on other bastards than does subtle changes to rulesets. Make good rules :: sure. But use HUMAN enforcers to sort out the head bastards … and then fire all plasma cannons. Ain’t no math yet that can serve as a substitute.

For instance :: dear Google :: how about Ed Magedson? Because that totally messed up situation is pretty much ALL your fault. De-index the RipOff Report {five years ago}.