Have you been suspended from Twitter? NO! You haven’t! Because you aren’t fucking punk rock enough. You’re all like :: “Did you hear about Michael Jackson? #rip #MJdead” :: And everyone else is like :: “Yeah I know! #kingofpop #omgosh” :: And then Oprah gives you a golf clap :: And everyone fucking hugs everyone :: And the shiny “New Media” Cup gets passed around so that each person can kiss their own reflection. blah blah.

On a completely unrelated subject {wink wink} :: Let’s look at some graphs :: Because graphs will make you smarter … and right now you are very very stupid. See if you spot any patterns stupid :: 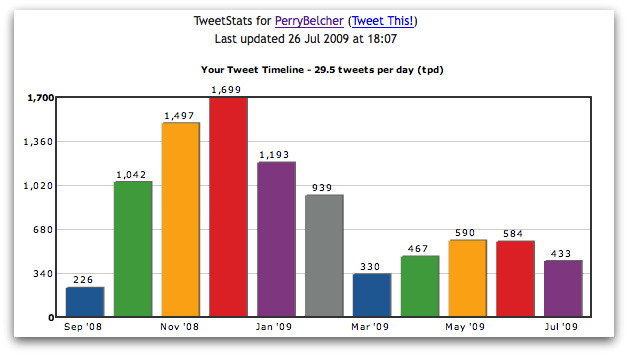 Felon and defrauder of the SICK Perry Belcher’s tweets per day {or “tpd” if you’ve lost all control of reality} as reported by TweetStats. Any guesses when The Droid began his assault on the Belcher Empire of Lies??

“@perrybelcher Here is my first tribute to you Evil Jowls!! http://is.gd/lTWj I hope you enjoy it like a bladder infection.”

And suddenly :: Twitter is much less fun for Perry Belcher. 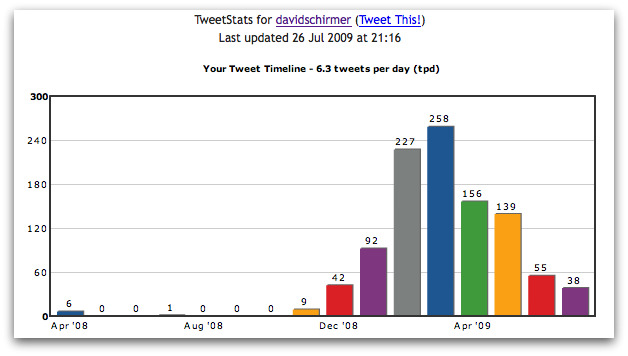 Aussie D-Bag David Schirmer had plans to emulate Perry Belcher’s technique and become a “Twitter Guru” for the Tiny Continent :: Because physics requires a marsupial version of all North American ANIMALS.

David and I have been talking since Middle March about how maybe he and Twitter “aren’t a good fit” ::

”> @davidschirmer’s TweetDeck! There’s no bathrooms to hide in on twitter. No back doors. No guards. When you’re here .. I FUCKING SEE YOU!”

:: it looks like he’s considering finding some Droidless pastures. 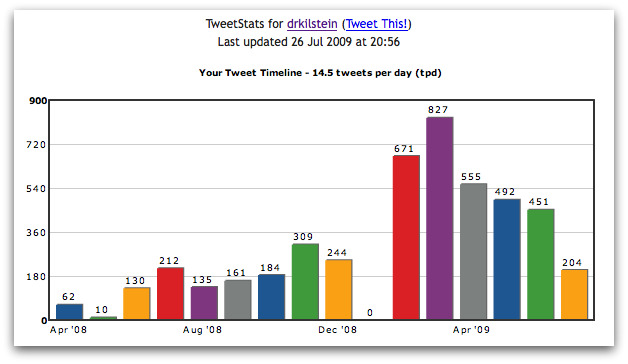 Not-Doctor Kilstein’s graph is strange :: Like EVERY other thing about him. What happened back in January? I know this 4 Sure –> I don’t want to know. If you know … please don’t tell me.

The first Droid Post about Doofstein was June 1 {link} :: So sufficient data is lacking :: But the trends are looking strong :: and I predict many more January 2008’s in this Sexual Harasser’s bleak future. 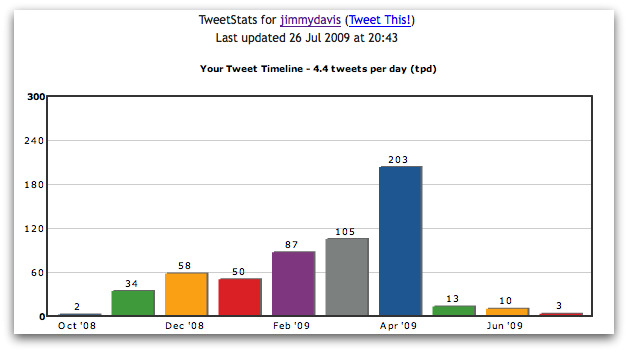 Oh Snap! What kind of massacre has occurred here? The best kind Jerry … the best kind.

The first post about Jimmy Davis appeared on March 31st {link} :: And called him out for {among MANY other things} being a follow spammer and non-contributor on Twitter. Jimmy the Twitter expert never answers his @replies :: so on April 3rd The Droid answered them ALL for him {1}{2}{3}.

That gesture was unappreciated :: and on April 16th Jimmy decided perhaps he should start answering his own backlog of replies. The Droid accompanied him for several hours :: Running very leisurely circles around a slow moving target {1}{2}{3}{4}{5} …

“Trying to put out somebody’s light so yours can shine brighter is the ultimate sign of being a coward. Please Retweet”

And then one last kiss for Jimmy :: containing his own massively overused hack catch phrase “what’s up?” ::

“Hey @JimmyDavis :: Everyone you talked too … plus everyone who RT’d your cry for help … what’s up?”

That’s the kind of premium service you never recover from.

I don’t know what Twitter is doing to try and stop scammers {other than suspending The Droid} :: But I’ve got fucking graphs over here!