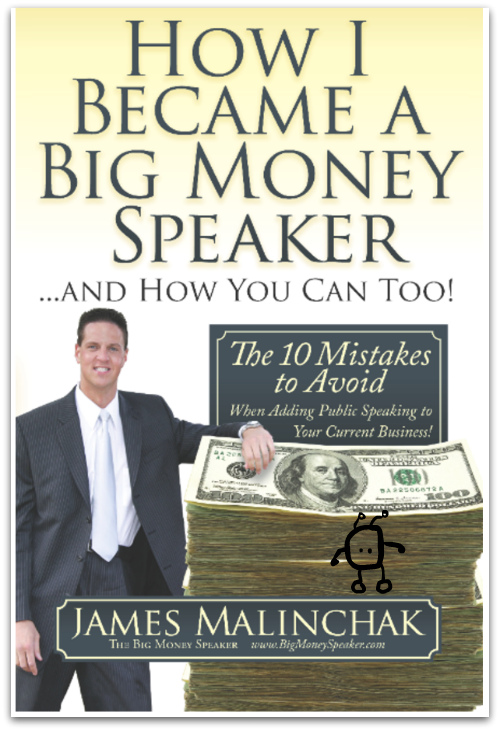 James Malinchak is a fucking scammer!

Of course :: I’m a just fake robot so what do I know but parody?

My recent James Malinchak {aka fucking scammer} post landed on ole’ cuzin Malinchak like a plague of biblical frogs :: and he no likey. I mean :: hello :: he’s trying to launch a scam frauduct off the back-end of a BS television appearance over here … and this ain’t helping.

I’m from a steel mill town where people lived with their homes and their pants and you can’t do this to me!”

So instead of thinking up a plan with his defective thinking equipment :: James Malinchak {scammer} called a hush law firm. Cause that’s how ABC’s super charitable Secret Millionaires roll {like mega dicks}.

The law firm of Lavely & Singer agreed to represent {stupid fucking scammer} James Malinchak in his efforts to once again bring silence to the voice of the abused victims … sort of.

Lavely & Singer did send a Cease & Desist letter :: but to the wrong motherfucking cowboy. Tom Antion :: a well liked veteran in this bizarro “industry” :: mailed his list about my Malinchak post :: quoted from it extensively :: and retracted a previous endorsement which he has come to regret. The big scary law firm sent the C&D to Tom instead of the fake robot :: weak ass threats by proxy … 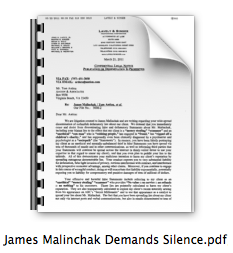 According to the Wall Street Journal law blog :: Lavely & Singer is the law firm that helped cover-up some of Tiger Woods’ shenanigans. They also represented Reese Witherspoon {in the incident involving Reese Witherspoon} :: and author James Frey {who made Oprah look stupid without killing anyone}.

“All of this demonstrates your malicious intention to harm my client’s reputation by spreading outrageous demonstrable lies. Your conduct exposes you to very substantial liability for defamation, false light invasion of privacy, tortious interference with contract, and interference with prospective economic advantage, among other claims. Moreover, if you continue to engage in this course of wrongful conduct, doing so will exacerbate that liability exponentially, potentially exposing you to liability for compensatory and punitive damages of tens of millions of dollars.”

They might just have a point there if James Malinchak wasn’t such an obvious scammer. But he is … so they don’t.

“Your offensive and harmful false Statements include referring to my client as an”unethical “ “money stealing” “ scammer “ who provides “No value :: no service :: no refunds :: no nothing” to his customers. Those lies are pointedly calculated to harm my client’s reputation.”

Quoting me :: complete with alt-punk-punctuation and everything. They are “pointedly calculated” words :: that’s for sure :: but rather than lies they are a true reflection of James Malinchak’s horrible reputation. You may think that Tom can’t be held liable for quoting my fake robotic opinions about how much turd sucking James Malinchak and his messed up face do … but Lynda Goldman of Lavely & Singer has already pretended to think of that …

“To the extent that you attempt to claim that in your emails peppered with defamatory statements you might have paraphrased or lifted from other sources and that you are therefore not responsible for stating that Mr. Malinchak is a “money stealing” “ sociopath,” etc., any such argument would fail as a legal defense to defamation claims, since you will be deemed to have adopted those defamatory statements as your own. See, e.g., Khawar v. Globe lnt’l, Inc., 19CaI.4th 254, 79 CaI.Rptr.2d 178 (1998) (“one who republishes a defamatory statement is deemed thereby to have adopted it and so may be held liable, together with the person who originated the statement, for resulting injury to the reputation of the defamation victim”); see also, Jackson v. Paramount Pictures Corp., 68 CaI.App.4th 10, 80 CaI.Rptr. 2d 1, 27 (1998) (“When a party repeats a slanderous charge, he is equally guilty of defamation, even though he states the sourceof the charge and indicates that he is merely repeating a rumor”); Srnolla, Law of Defamation (2ndEd. 2004) Vol. 1, §4:91 (secondary publisher, or republisher, may be liable for defamatory publication). Be advised that “[r]epetition of another’s words does not release one of responsibility if the repeater knows that the words are false or inherently improbable, or there are obvious reasons to doubt the veracity of the person quoted or the accuracy of his reports. . . . “Goldwater v. Ginzburg, 414 F.2d 324,337 (C.A.N.Y. 1969). That is the case here.”

Lynda Goldman of Lavely & Singer is expressly and impliedly calling The Salty Droid a liar. Such an obvious liar am I that other people quoting me is an actionable tort in and of itself. Given that my whole reputation :: and the success of this project :: hinges on my perceived veracity :: I’d say that Ms. Goldman’s unfounded statements and hurtful allegations do themselves rise to the level of defamation. Maybe I’ll send Tom Antion a C&D over his republication of Ms. Goldman’s defamatory words {or not}.

Lavely & Singer style themselves as an Entertainment Law and crisis management firm. Their efforts to shut-up the celebrity press are of zero interest to me. Don’t care about who Tiger Woods screws :: don’t care if people want to expose who he screws :: don’t care if lawyers try to shush people who are going to expose who he screws. Don’t care. Exploiting the fame of celebrities to sell trash papers is big business :: and those celebrities have the right to fight back {I guess}. If your name is a $50 million brand :: then you’re probably going to hire lawyers to protect that brand. Fine.

But James Malinchak isn’t a celebrity trying to keep his private life private :: he’s an asshole that’s fleecing innocent and naive victims. His reputation isn’t being damaged :: it’s being exposed. If dissent is silenced :: he will do more harm … there will be more victims.

I’m hoping that Lavely & Singer want to be an Entertainment Law Firm … and not a Facilitating WhiteCollar Crime Law Firm. I’m hoping that they just made a mistake :: and that they wouldn’t send a 1st Amendment slighting C&D regarding a public figure if they thought that a public figure might actually be taking sad middle-aged ladies for five-figure sums. Because that wouldn’t be ethical :: and I don’t imagine it would help attract new celebrity clientele.

I’m most definitely their motherfucking huckleberry.