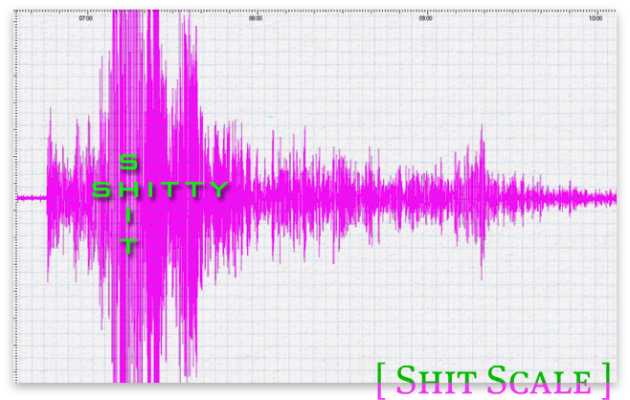 Remember how horrible that scamming real Debbie audio was?

It was like a 6.66 on the Shit Scale :: one of the highest SS numbers ever registered on the fake robot blog.

The Shit Scale is a very scientific {trust me} measure of something’s FUCKING TRUTH in relation to the hype-truth / cult-truth / lie-truth to which it relates. High Shit Scale evidences reveal the blackness at the core of the unicorn machine :: and have a tendency to cause Shit Storms. Oh shit :: here comes some now {watch out for turds!} …

Shit Storms release the enormous pressures that accumulate in the large gaps between perception and reality. They tend to draw a crowd :: and lots of cheers & cackles :: because hypocrites getting theirs is irresistibly good … and sadly rare.

It’s not really funny … cause it represents something truly terrible. But it feels funny :: because as you listen to the horror … you are aware that your hearing of the horror has :: in some fundamental way :: changed it. The wall has cracked :: and the fucking truth is breaching.

The Scamming Two Debbies boiler room audio exposes an even more fundamental truth than the Syndicate Shit Storm audio. As we’ve discussed here dozens of times :: much/most of “Internet Marketing” is in fact just lead generation for old fashioned phone room scamming. If you really want to succeed in “Internet Marketing” then you should listen close :: because this is what’s required.

In spite of its ridiculously high Shit Scale number :: this audio didn’t create a Shit Storm. Reaction was subdued :: muted … and depressed. Without a doubt the correct reaction. Most people were unable to listen to it str8 through in one sitting.

Here’s why … cause you hearing it means jack shit to real Debbie. The audio is her getting ruined :: and the fact that we know about it won’t change things for her … it’s too late.

It’s not fun to feel helpless.

People get raped :: you know they do :: but “knowing” it and watching it are non-comparable experiences. You blur the things you “know” into a form that your weak brain can tolerate without killing off your ability to hope. Things can be too real …

It’s a snow job :: not a conversation.

It’s a criminal conspiracy :: not a “coaching floor”.

Well bad news for the bad guys :: I have more audios … and they’re even worse. I’ll use jokes :: and puns :: and hyperboles :: and melodrama :: and parables … and any and all literary devices available to make the dark message palatable to the queasy masses. But we WILL grab this bastard of a problem by the neck :: and watch its eyes pop as we squeeze.

Meet me at the barricades!

… or … just keep coming back here if that’s more convenient and puts less miles on your mini-van.