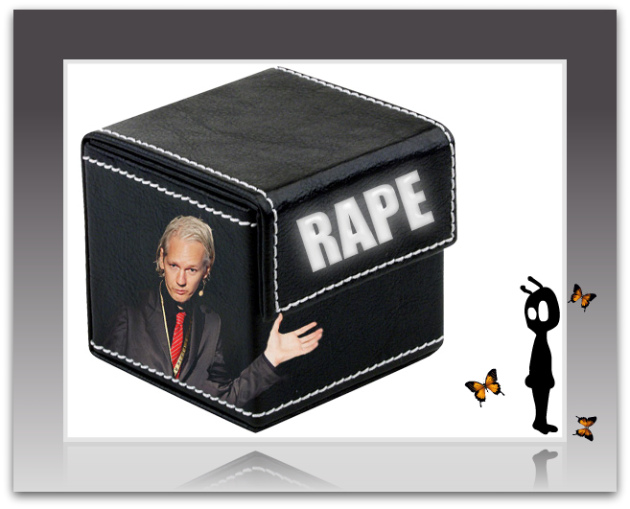 Julian Assange has been stuffed into a rape box :: and now mean old Uncle Sam is sticking his Jr. Henry Kissinger into the glory hole …

So your life is a mislabeled empty box? Sounds about right … good speech champ! Maybe someone should leak you a copy of Metaphors for Dummies™.

[WARNING :: opening up a rape box is not advised by the council of advisements. Look for boxes with more attractive labels :: like ‘popcorn’ :: or ‘unicorn’ :: or pretty much any other ‘corn’. The ‘rape’ box should be one of your last box opening choices :: just after the ‘monkey pox’ box … and right before the ‘black eyed peas’ box.]

Julian Assange doesn’t like condoms :: or HIV tests :: or women. According to the alleged Swedish rapees :: if Julian had just taken a quick break from “ending two wars” in order to prove that his stink seed was not tainted by non-DNA based pseudolife … then there would have been no need to involve The Man {swedish style!}. But Julian prefers selfishness :: running :: silence :: secrets :: cowardice :: and lies.

The prosecutor leading the rape and sexual assault case against Julian Assange is a “malicious” radical feminist who is “biased against men”, a retired senior Swedish judge has told the hearing …

Geoffrey Robertson QC, acting for Assange, asked if it was her view that Ny wanted “to get [Assange] into her clutches and then arrest him no matter what?”

“Yes” said Sundberg-Weitman. “It might be her attitude to have the man arrested and maybe let him suffer for a few weeks to have him softer [for interrogation].”

That might be her attitude … maybe :: but it might not be … maybe. Sundberg-Weitman has no fucking idea :: because she doesn’t know the prosecutor … and she testified that she knows nothing particular about this sitution other than what she’s seen in the media.

But she did drop this info bomb …

Rape prosecutors with a bias against rape. Holy shit I’m scared! What’s next :: ketchup on hotdogs? Kittens who look adorable in sailor suits? Jews against anti-semitism? Where does it end? Hold me.

I knew things had declined in Sweden since the fall of disco … but I had no idea it had sunk to the point of people giving lectures. It’s sad really … just sad. As they would say in Sweden … Denna våldtäkt föreläsning smakar fisk.

Will Assange be extradited back to the People’s Republic of Sweden where he’s sure to face an unfair trial at the hands of a “justice” system long viewed as little more than a puppet of Dick Cheney’s lesbian pacemaker? Do I give two craps? Does this post have too many rhetorical questions?