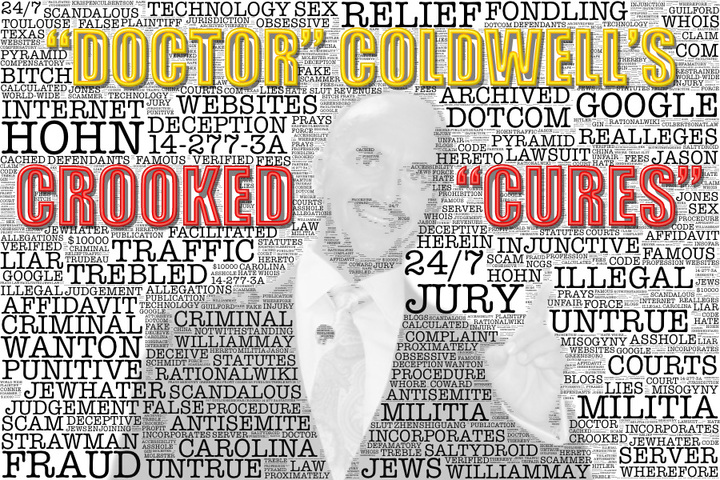 This SaltyDroid story trilogy was eight months in the making :: it features …

…. and a semi-retired fake robot …

It’s gonna be fuckin’ awesome :: and it starts right here … at the hilarious end.

Shame of Germany Leonard Coldwell’s softball lawyers :: Culbertson & Associate … are withdrawing from the case. His desperate lawsuit against me :: like his last … is doomed to end in embarrassing ignominy.

I get a midnight email from “Droid fucker” at losereliminator@gmail.com …

I do love helping sluts though!

Mr. Coldwell’s latest lawsuit was filed in North Carolina {definitely the wrong state} in January 2015 {several years too late} by attorneys William F. May and Krispen Culbertson … both of the very not prestigious Culbertson & Associates. The suit named me {_incorrectly} :: RationalWiki {incorrectly} :: Whois.com {incorrectly} … and our friend Connie Schmidt {correctly}.

I didn’t post the complaint right away :: because I didn’t want y’all publicly outing Culbertson & Associates’ many idiotic mistakes before I was ready … but now I’m done slow playing with my food. 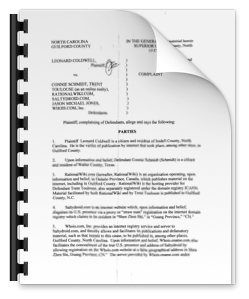 It seems this 2012 SaltyDroid post continues to be an existential threat to Leonard Coldwell’s dark and terrible game. The post carefully presents allegations {made by numerous people :: and here to police} that “Doctor” Leonard Coldwell manipulates women into sexual situations by proposing to cure them of despicable diseases.

Mr. Coldwell’s attorneys at Culbertson & Associates make their allegation about my allegation that other allegations have been made :: in Paragraph 14 of their laughable complaint …

Defendant Jason Michael Jones, and his internet presence saltydroid.com, caused to be published on the internet at www.saltydroid.com a police report and other commentary which falsely accuse Plaintiff of having forced a person or persons to have sex.

They don’t misname my .info site once {or occasionally} :: a silly typo that any {_terrible} lawyer could make … they fully embrace their ignorance with a sort of clumsy strutting arrogance that they could only have learned at www.TrumpUniversity.com.

Saltydroid.com is an internet website which, upon information and belief, disguises its U.S. presence via a proxy or “straw man” registration on the internet domain registry which claims to be resident in “Shen Zhen Shi,” in “Guang Province,” “CN.”

They sued what they thought was saltydroid.com’s web server …

Whois.com, Inc. provides an internet registry service and server to Saltydroid.com, and thereby allows and facilitates its publications and defamatory material, such as that instant to this cause, to be published in, among other places, Guilford County, North Carolina.

Said statements are viewable on a 24/7 basis, and are likely cached on alternative hard drives, thereby creating the possibility of non-original “republication.”

Alternative hard drives are just like normal hard drives … but with more plaid and nihilism.

I totally get it though … this is exactly the sort of slapstick-iShite™ you get when you hire grumpy old men pretending at practicing law on the series of tubes. Don’t ask your grandma for help syncing your phone with your cloud photos … unless you want your entire contact list to see your collection of staged American Girl doll scenes {and why wouldn’t you? live your truth!}.

But Culbertson & Associates biggest mistake was of the old school variety … and can’t be excused by web ignorance {webnorance?}. It’s this bit right here …

Because I made no such accusations. It kinda misses the whole point of that post! Had there been forced sex alleged :: I’m {semi} confident … Charleston South Carolina would have put the full stop on Leonard Coldwell. But it was manipulation that was alleged :: not force … which is how it ended up a SaltyDroid matter. “It was manipulation not force” could be the repetitive title of almost every post on this Shen Zhen Shi straw man proxy site.

Here’s me back then …

People are going to be reading this lawsuit for as many years as Leonard Coldwell peddles his hack-quackery on mass. In it they’ll find Leonard’s own lawyers :: in anachronistic legalese and stripped of context … saying that The Salty Droid accused Leonard Coldwell of forcible rape.

I didn’t. But if I had done :: it would have been the effing truth … because that is how I roll. Many readers will find this lawsuit and assume that I made these “force” accusations accurately … when I didn’t make them at all.

You should prolly thank your lawyers for that Lenny :: though I wonder if the “force” thing was lawyer error … or if that’s what you told them I accused you of at the behest of various Jewish-pharmacological type interests? Maybe your conscience has been making allegations against you as well? 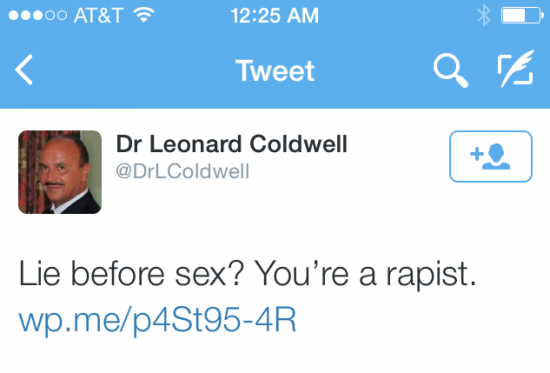 Only CosmicConnie :: aka “the slut” or “the bitch” in LeonardLanguage … was named and served in a manner sufficient to require a response. I was easy to find … but I wasn’t found. I scrawled my address on the wall of the world :: and demanded that these poser cowards serve me … but I was not served.

There is little to discuss, since in personam service has not been effected in this case, and you are therefore not a defendant before a tribunal at this time.

… was a tack taken with me several times by Culbertson & Associates.

Maybe Mr. Culbertson is just the absolute fucking worst :: he couldn’t get any of the basic facts about me correct … and he couldn’t figure out how to use the mail. Or maybe :: just maybe … it was evil not errors which had Coldwell/Culbertson naming many parties to this lawsuit … but only forcing a response from the person least in position to respond.

Connie’s time to reply was running out :: SaltyDroid.com{.info} waived service and put itself “before the tribunal” voluntarily … filing this Motion to Dismiss for Lack of Personal Jurisdiction. 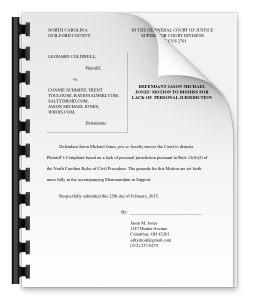 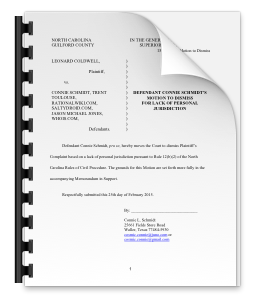 The motion is a clear smackdown-winner :: not because it’s so good {it’s not} … but because the lawsuit it attacks is such chum-splatter-dumbdumb nonsense. You don’t need a law school diploma to know that you can’t sue someone in a state where none of the events occurred … and where none of the parties were present.

Culbertson/Coldwell seemed to want no response :: but they got two responses … and that filled them up with the rage of the deranged. According to them {and basically everyone else I’ve ever caught out on some bullshit} it is actually I who is the dirty rotten criminal.

Further, in the event you do not understand, giving legal advice in a jurisdiction wherein you are not licensed, like Texas, is a crime. Be kindly so advised. We shall see to what extent this has happened already.

… adviseth Culbertson & Associates unto me.

I responded to a rubbish lawsuit in a way that helped an unrepresented party respond to the same rubbish lawsuit … someone lock me up now before I do any more damage to society!

Coldwell :: as he is so wont to do … took his rage a step or two {thousand} further. In his expert professional four doctor degrees worth of opinion :: I’m likely to be the next mass shooter … 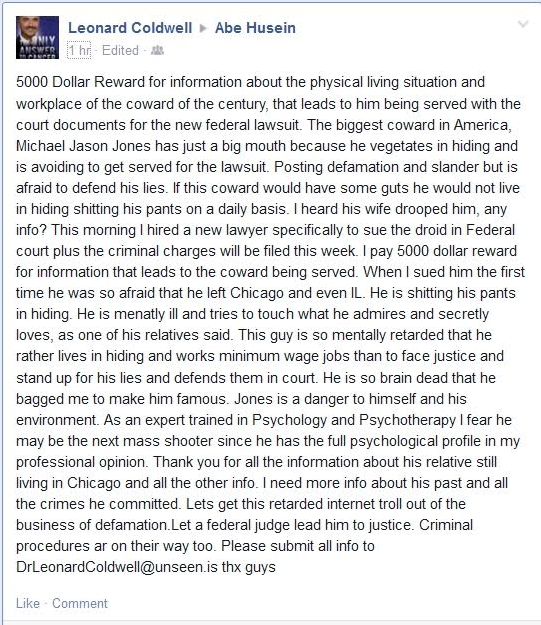 A $5000 reward for information that leads to my being served … offered after I gave up my new address and made a voluntary appearance in this stupid case.

I’m not hiding you fat :: bald … bitch! You are. I’m seriously begging you dumpy :: sue me proper in federal court so I can ask you questions under oath for eight str8 hours … not that you’d last more than twenty minutes … but it would still be fun.

Instead of responding to the motions to dismiss with lame legal arguments :: Leonard Coldwell and his attorneys at Culbertson & Associates ignored the motions … and tried still harder to intimidate Connie Schmidt. They subpoenaed her gmail {but not mine} :: and they sent her {but not me} this super dick discovery request … 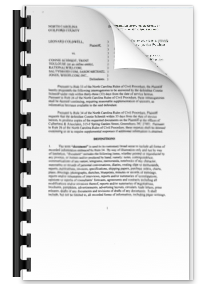 Most of the interrogatories have nothing to do with the dumbdumb defamation case :: it’s just a bunch of butthurt over how I made it possible for Connie to respond adequately.

But uhm … it doesn’t fucking scare me? I mean jesus effing christ! Did these dudes not read any articles here before they tried to step to me? Obviously they did not … they gave every appearance of having not even read the Coldwell articles!

You’re not going to believe all the batshit things these lawyers said to me :: even though I was frequently warning them that this was all going to play out on a public stage … they just kept on talking … and talking … digging … and digging. But :: that’s for next time … stay focused little robot!

So anywayz :: I file a motion to stay discovery pending resolution of jurisdiction … 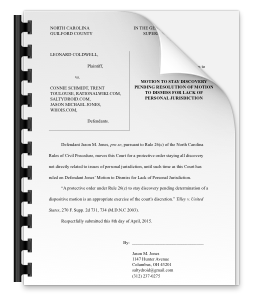 Connie does the same … 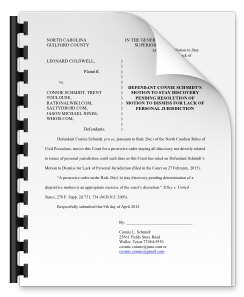 It’s like I’m on a Texas paperwork crime spree now :: words splattering all over everything … verbs :: nouns :: stamp licking … the whole nine. What a rush {of boredom}!

Culbertson & Associates don’t respond to any of the motions. They start talking to me about taking themselves off the case :: not because they’re losers losing you understand … but because of a never to be named conflict of interest.

They sit on their unclean hands {letting Connie sweat it} until the court demands a “why are you not doing anything for fuck sake?” type conference. 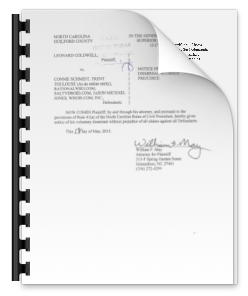 Sayeth Culbertson & Associates unto me …

Given certain matters that have come to light during this representation concerning my client’s conduct, I believe this to be an appropriate outcome to the litigation.

Client … may I please introduce you to bus?