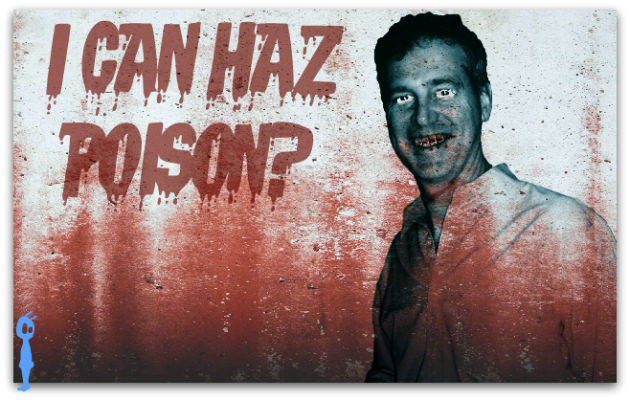 Okay :: there’s a business lesson in here … I think … but first let me tell you about a Holiday Inn Express that Jeff Walker stayed in last year.

“Sounds boring” :: says you because you’re a hater.

Well what if I told you that there was a free breakfast at this hotel?

“The breakfast spread had lots of bagels, cereal, toast, and such. And there was a bunch of tables with lots of people eating breakfast.”

Oh yeah baby :: now I’ve got your attention! And not only were people eating breakfast … but some of them were occasionally looking up at a TV.

On the television a news program was showing a clip from a robbery :: taking money at gun point …

“It was a horrible video. It literally made me sick to my stomach.”

Wow :: you might be a pussy … so you should have that checked out.

“However, the really amazing thing to me was the people eating breakfast in that lobby… Some of the people were parents with young children at their table.”

Can you believe the audacity of some people eating breakfast with their children :: what is the world coming too?

“It was almost as if someone walked up to them and asked “would you like some poison injected in your brain?” … and their answer was “yes, please give me an extra dose“…”

It is almost just like that. Except for the part about the poison :: and the brain injections :: and the whole “extra dose” part … cause that’s all weird and nothing at all like a continental breakfast in a hotel lobby with your family.

Okay but wait :: enough about breakfast … let’s get to the business lessonings …

“This is ESPECIALLY important for entrepreneurs.”

“If you put poison into your brain, you’re going to get a bunch of poison coming out of your brain.”

Eureka! That’s business lesson genius! Somebody make a fucking poster out of that inspirational inspiration.

You put poison in –> you get a BUNCH more poison coming out. Boom! You just opened your own poison factory … and now you have a pimp yacht that you christened “Rich Person’s Boat Dot Com” because the money came on you so fast you didn’t have time to mindmap more creative boat names.

Poison factory :: I think that was the lesson. Or maybe the lesson was that Jeff Walker doesn’t hold people up at gun point to take their money. He’s so against it that it makes his lil’ tummy hurt. So if you happen to have heard some tapes where Jeff Walker sounds like he’s plotting out ways to suck you dry … just keep in mind that he’s still 100% against convenience store robberies {and those who would watch them on TV}.

“So please take it as a given… when you’re an entrepreneur, people will try to tear you down.”

But not really. People mostly won’t give a shit because they are kinda busy caring about themselves.

“If you pay attention to those people, then you’re injecting poison into your brain, as surely as if you were in that hotel watching a TV with a convenience store clerk begging for her life.”

I’m confused … should I even be reading this post? That’s the second time he’s mentioned a very violent episode … I’m worried all this negativity is going to poison my successful hope-a-trons.

“As an entrepreneur, one group of people who will try to tear you down will be people that are close to you… your family and/or your friends.”

You can’t let your family tell you things like …

Fuck them! That’s just the sound of them wanting you to fail because they’re jealous of your future happiness. Send me $2,997 and I can teach you how to numb the pain and deny the problem in Seven Easy Steps.

And thus did Jeff Walker illustrate the chilling tendency of “Internet Marketing” “Gurus” to cross freely into the oh so murky water of cult tactics.

Separate from your friends and family?

No … don’t. Never allow a business or business “opportunity” to come between you and the real people in your real life. Never. That’s just crazy talk! If your family is concerned about something you’re doing … reevaluate that something. Consider keeping your friends and family around in case forming cartels and going on cruises with pedophiles don’t turn out to be winning life strategies.

“But that’s not the end of it… these days, in the age of the Internet, where anyone that can turn on a computer can become an anonymous critic… Critics (who usually have no experience or are abject failures) then the best answer is usually to ignore them.”

Sounds about right. Unfortunately for shit eating bastard Jeff Walker :: some critics aren’t just anyones with computers. Some critics are qualified :: dazzling :: credentialed :: terrifying :: and popular beyond Jeff Walker’s wildest affiliate wet dreams. Those people :: let’s call them no-reach “butt pimples” :: are a bit harder to ignore {even with medication}.

“It’s something of a secret that lots of entrepreneurs and high achievers are motivated in large part by a thirst for revenge… Personally, I’ve been driven to some massive successes as an answer to people attacking me… once to a launch that did almost $4 million in sales in just a couple of days.”

Someone was all like :: “Jeff Walker is a scammer”.

And then he was all like :: “Oh no I’m not you sons of bitches … watch me gouge a couple hundred sheeple for a couple thousand dollars each … and with only a 30% refund rate.”