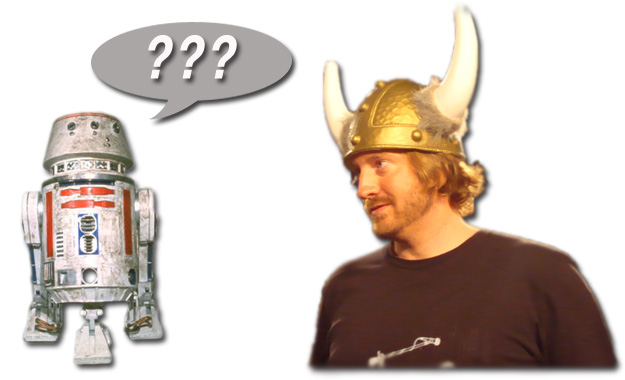 The Salty Droid has caused the alarms to sound at d-bag headquarters. The alarm system is old and rickety :: and it’s never been sounded before :: so the sound is tinny and inconsistent :: reminiscent of a gut-shot Christmas Clydesdale bleating out its last. It’s like the tell-tale heart after a couple years of heavy crack use {side of meth}. It’s enough to make a “man” make mistakes :: many many mistakes :: stupider and stupider mistakes. Fucking mistakes :: that’s all you assholes have shown me so far :: it’s not very intimidating.

It’s no secret that the lunatic monkey brigade has been fixated on finding {and destroying} The Salty Droid for many months. But finding me proved to be a huge disappointment :: because {oh my great fucking god} I was telling the truth the whole time. That flies in the face of much silly silly talk by many over confident fools. They weren’t just wrong about who I was :: they were wrong in the face of the truth on a plate. I told them who I was … and what I was doing … but they chose to believe everything but. It pretty much sums up most of their lives.

I didn’t want to tell this story :: it’s too ugly to be fun. But I’m compelled … so fuck it here goes.

For the past several months Frank Kern and Andy Jenkins have been cynically manipulating Karin Hiebert to try and get information about me … or to try and get some control over me … or whatever the hell.

Karin has been a commenter on this blog for a long time {in Internet years}. Her first comment {on a post where I predict the future .. suck on that numerology!} was on April 2. Over those months she has been caught up in much shenanigans :: and twice {uno :: dos} ended up being a part of the story.

“(Might be time for a chit chat My Sweets…it’s been a while…talk soon!) Hugs!”

“… when you hang with people long enough you start sounding alike and taking on their mannerisms…sometimes even their accents.”

“{Oh, Jason I wanted to say that the “Pinky Swear and you keeping your promise” meant a lot!} Luv ya Babe!”

… that’s a stiff glass of familiarity. I warned against this BS repeatedly :: as she mentioned herself in another comment …

“To set the record straight, Salty told me not to stand to close to him…(he was protecting me back then) it was the best advice I never took! (I ain’t sceered!)”

But it was never just about being brave :: as I told Karin May 11 via email …

“Also, it’s likely a comfort for them to think that I’m somehow related to you. Their only hope is that I’m some insider … and when they figure out who I am … it will discredit me as a scammer and hypocrite who is pretending to be moral to attract business … and that will be that … the end of me. Like, for instance {no offense} if I was you … or someone like you …”

Lo and fucking behold :: that’s exactly what they did. They allowed themselves to believe that they could gain some small measure of control over the situation by using Karin as a proxy. A much :: much :: less intimidating proxy. Karin has received MANY freaky late night phone calls about how The Droid should shut his pie hole :: The Droid has received ZERO. Bullying Karin is somewhat satisfying :: Bullying The Droid is terrifying to the point of impossibility.

This September Karin went to a fund raising event for PAVE and The Angela Shelton Foundation :: ostensibly to do hair. A not coincidentally short time later :: Karin receives an email from IM’s main man Frank Kern! OMG Frank! He’s such a great guy … let me lick him! {whatevs! sheep!}

I’ve read your blog posts about being a survivor of abuse and I was wondering if you’d help me.”

He needs a recommendation for a woman’s charity he can donate to :: Google hasn’t been helpful :: and he just happened to remember that Karin {the supposed BFF of the anti-christ} is an abuse victim. Frank proceeded to explain why he’s got such an interest in the cause :: giving WAY too many specific details about horrible things that have occurred to members of his own family. Whether the stories are true or not :: it was a completely inappropriate conversation for for an “introduction” email. I felt icky all over after reading it … and I’m not going to reprint it for the same reason. Let’s just say that it was grossly manipulative :: and leave it at that. Karin has Angela Shelton and her “celebrity” hair on the brain :: and recommends Kern give her the money. Frank publicly claims to make a large donation to Shelton.

Meanwhile :: Frank and Andy start talking to Karin about iWorks :: and how they are the “real scammers” I should be going after. You know :: no pressure :: they’re just sayin. Andy tells Karin he needs to speak with me. I decline … a couple of times … because I don’t deal through proxies. I can’t understand his motivations for approaching Karin first :: my email is out there … and I’ve already responded to enough “gurus” for Andy to know exactly how to reach me. Andy and I have an email conversation :: and I win. I could have strung him along and made him say all sorts of terrible stuff about Brad :: but there are lots of people willing to say terrible stuff about Brad {because he’s a massive bastard} :: and Andy’s completely disingenuous tone irritates me. So I snarked the conversation to a close. A few short minutes after I pushed send on the final message :: Andy forwarded the whole email chain to Karin in indignation. WHAT THE HELL?? Why would he do that?

Karin also thinks it’s strange that Andy forwarded the email chain :: and she tells me about Kern and Shelton :: and about how they’ve already been pushing the iWorks links on her. Ah … now shit makes sense. I suggest it’s highly probable that Kern and Shelton had been acquainted before Karin “introduced” them :: and that the mere fact that Kern has been calling her is highly suspicious. They don’t really care about her :: they are just angling at me {poorly}. But Karin was excited about the attention {especially from Kern} :: which is what makes this tactic so hurtful :: and I could tell that my message of painful truth wasn’t quite getting through to her. But I published Andy’s email :: which I felt made it pretty clear what I thought about that tactic … and nicely illustrated just how ineffective it was. Game over me thinks.

But alas :: Karin keeps talking to Kern. She tells me that he’s an okay guy {no he isn’t} :: and that maybe they are becoming friends {seriously doubt that}. Then this in my comments on Dec 10 ::

“Thank you to my friends HERE and to friends like Mike Young, Jason M. Jones and Frank Kern… just to name a FEW cool people who have YET to prove me wrong in my choosing of this small circle of friends…”

OMG! I’m in the same sentence as Frank Fucking Kern?!? You’ve got to be kidding me. It’s a fake testimonial for Frank Kern on my blog! What in the crap? Apoplectic Android!!

On Friday I learned :: from Karin :: that she has received a substantial amount of cash from Kern over the last couple of months. Lump sum PayPal transfers. On the one hand :: Karin no doubt needs the money. On the other hand :: Yuck!

Now I don’t care what happened. I WILL NOT be associated … in any way … with cash transfers from the bad guys. It’s impossible. The FIRST TIME I say “pay up and I won’t write” :: I FUCKING LOSE. Then I’m just as bad as them :: or worse :: because I’m cloaking myself with righteousness. People who fight for ethics :: have to first have ethics. Way above average ethics. Holy shit everyone is watching me ethics. Money transfers and cryptic comments about “the truth coming out” fall well short of those standards.

So for the record …

I’m just a lone soldier … and a sad robot.