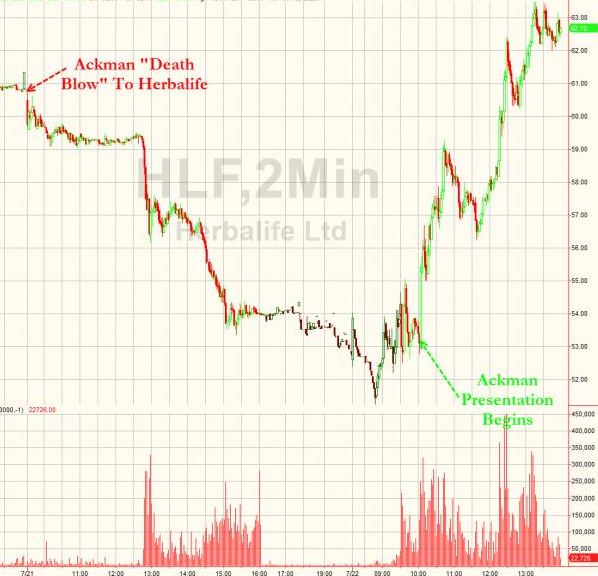 Financial journalists judge the importance/relevance of a given piece of news or information based on the stock market’s reaction to its revelation. Reporters who move stock prices are rewarded :: those who don’t … aren’t. It’s dumb :: and irrational … but it’s how the profession is setup.

Guess who told me that?

So then why :: in the name fucking fuckity fuck … would he pre-hype an important research presentation like Don King unchained {minus the rhyme and rhythm … but with better hair}? He said it was going to be the most important presentation of his career :: a death-blow … Herbalife was going to collapse. He went so far as to compare Herbalife to Enron :: a ridiculous analogy :: because Herbalife’s business model is predatory … but real.

Ackman and his fund are a big deal :: and he’s an obvious genius … so of course the market freaked out about his prognostications and the stock tanked … taking with it all the room for a negative price reaction to the presentation itself.

Quite insane. I laughed … but it wasn’t funny.

The subject of the presentation :: Club 100 and the double pyramid of artificial consumption … was incredibly complex. Our world has long since devolved into a quagmire of Kardashian side boob and television singing contests … so there was never going to be a “death-blow” type visceral reaction to brainy complexity.

Midway through the presentation :: the stock was up 10% … by the end of the day it was up 25% … the biggest gain in its history.

But changes in the stock price change nothing about the facts. Club 100 is disgusting :: pervasive :: horrible :: evil :: exploitative :: super scammy … and it’s fundamental to Herbalife’s nutrition club model. Herbalife corporate has long known about it … and has encouraged it. If it can be stopped :: or slowed … it will seriously effect Herbalife’s revenues and viability. 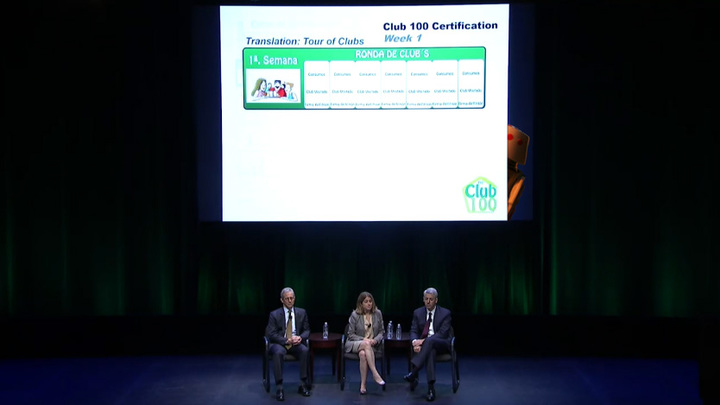 Club 100 was first brought to my attention {last September} by the talented and perceptive Ms. Christine Richard … who co-presented with Mr. Ackman at Tuesday’s event. Christine and I have been regularly discussing the scams of scamming scammers for the past two years. She’s the best researcher I’ve ever met :: which is why she had to escape from her previous life as a financial journalist … where research is strictly forbidden.

I wasn’t immediately convinced that Club 100 was important :: because their website was lame and inactive … and I’m an Internet-centric sort of robot. But disagreeing with Christine is usually a recipe for wrongness :: and I seriously hate being wrong … so I kept snooping it. Then in October I stumbled on this photo album … 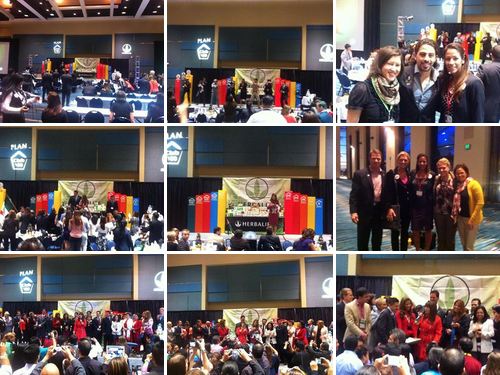 … and an obsession was born.

The photos are of a Club 100 event at the Palm Beach County Convention Center. It was a fucking HUGE event :: attended by many of Herbalife’s top distributors … and keynoted by their #1 distributor. Like all good pyramid within a pyramid systems … it had completely separate symbols and branding. It was Herbalife … but it wasn’t Herbalife. I call them “shadow events” :: and after more than a year of research into this crap company … this was the biggest one I’d seen.

Whatever was going on here seemed likely to be the key to Herbalife’s post lead generation business model … that it was so well hidden made it all the more intriguing. I thought about almost nothing else for the next three months :: and it was totally worth it … because Club 100 turns out to be one of the most fascinatingly ingenious scams I’ve ever unraveled.

I once thought that Herbalife was just a backwards :: old-fashioned … MLM clinging to yesterday’s scam model. I said this to Christine Richard in our first email exchange back in 2012 …

“I think the biggest risk faced by those publicly traded old-school behemoths is not a sudden outbreak of government enforcement or public awareness … but rather that the newer versions of the same scam are better and more agile at distributing the unicorns.”

Turns out that top Herbalife distributors are incredibly :: impressively … innovative.

My next post will detail Club 100 … SaltyDroid style. It will be the most important post of my career.

… except :: not really … cause that’s a stupid thing to say. No one act :: no one step … can be all that important in the fight against scamworld monsters. Because Scamworld is a ginormous and twisted place … where progress is all but impossible.

Our only hope is baby steps … and overly optimistic relentlessness.