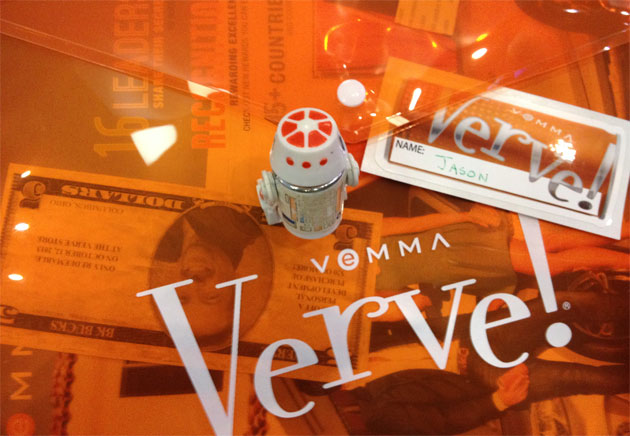 “Raise your hand if you’ve spent your last dollars to get here today” … says one of the young Vemma Leadership Academy speakers as he paces the stage like an #MLMtweeker on the fiend. About half of the 3500 {mostly lower middle class} youngsters raise a sad hand while sharing knowing looks with other kids from their overpacked cross-country carpools … success demands sacrifice.

They think they’re part of a movement :: a mission … a fucking “young people revolution” {#YPR}.

Someone put juice in a can … and the world will never be the same.

It seems so fun to laugh at them :: stupid dummies … unless you’re looking right at them. Their baby faces :: sucked into an old-fashioned scam :: being sucked out … by some old-fashioned bastards with sexy cans.

This event was cheap {for me} :: I was already in town … and they didn’t make me sign anything {like a James Ray style waiver of death liability … or a 300 page Herbalife distributor agreement}. All of which I took as a sign from Jim Rohn that I must attend … and pass judgement.

The majority of the six-hour {no breaks!} speaking lineup consisted of #YPR Vemma sales leaders whose flat :: mini-guruesque … speeches started off something like …

“Hey what’s up you guys. My name is blah blah blah you guys :: I’m not old enough to drink you guys … and I’ve been in this business for well over eleven months now you guys.”

Blowups of their knowledgeless faces lined the Columbus Convention Center’s approach to Exhibit Hall E :: screaming “this could be you!” to all the dreamers … and affording these veteran leaders some of their best instagraming opportunitiessince last year’s senior prom. 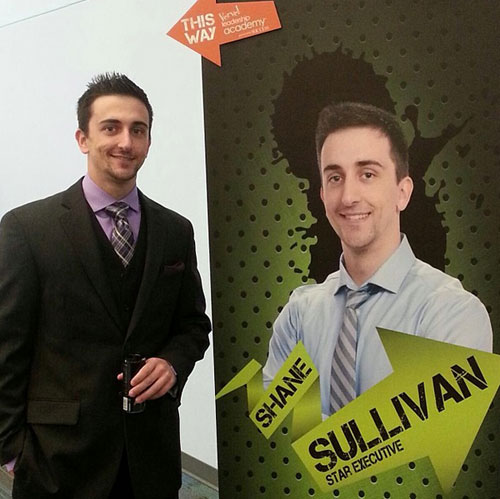 “Your presence here signifies you are one of the exceptional, standout achievers of our time (whether you know it yet or not).”

… says Darren {typically understated} :: in his welcome note on the inside cover of the day’s agenda.

This juice selling thing is the new NASA :: bitches … #YPR.

Now is the time to take control of your future. For the bold, ambitious, and progressive-minded achiever, now is the greatest time of opportunity in human history.”

Gosh :: what a stunningly positive and breathtaking perspective … voiced by a firm-haired mentor of extraordinary virtue and hopeful loquaciousness. But the first thing Hardy did {after applying his makeup} was rattle off a load of depressing statistics about the prospects of those fool enough to get an education in lieu of an MLM BMW.

The nega-spiel was in keeping with Vemma’s new :: pseudo senseless :: emergency policies … screenshots of which were posted on the dreamstealing hater website YPR Pariah. 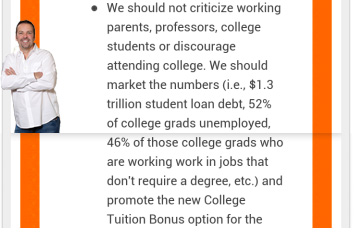 We shouldn’t discourage college attendance :: we should just imply that college is a terrible idea … and that our juice selling MLM is the fucking revolution solution.

BK Boreyko :: d-bag in charge and opening speaker … started out his substantive remarks by introducing the College Tuition Bonus option to an under impressed {but trying to stay positive} audience of unicorn lovers. The tuition ploy was added as part of a Vemma response to recent public criticism … but BK tried his scammy bestest to frame it as innovative largesse on his part.

He had a harder :: more winding … time doublespeaking his way around changes being made to the bonus policy which will require “Brand Partners” to have significantly more than the zero retail customers required by the plan to date. BK calls this new retail customer requirement an :: “extra layer of protection” … for the opportunity. “Customers are good thing” :: he says … apparently having a legal minimums epiphany.

I mean, if you opened up a Subway franchise and just focused on opening up more Subway franchises – and never said ‘hey should we get some customers in here to eat some sandwiches?’ – people would laugh at you.

Yeah :: that sure would be stupid … MLM much?

The consumption of an MLM’s products within that MLM’s distribution network :: does not count as end user consumption for the purposes of making a pyramid scheme determination … as a federal court in California reminded Herbalife this week while refusing to dismiss a case against them …

Although Defendants contend that distributors should be classified as ultimate users, Omnitrition points out that “[i]f Koscot is to have any teeth, [a sale for a distributor’s personal use] cannot satisfy the requirement that sales be to ‘ultimate users’ of a product.”

It sounds hard though :: because people get into Vemma for the infinite income opportunity {the chance to “literally set yourself up financially for __life” as BK said in the same fucking speech} … not for the juice boxes. But BK has a solution for the impossibility of retailing :: namely charity … and pity. Simply go to members of your immediate family :: and pitch them on buying $500 worth of Verve! per month because … a “portion of the proceeds” will go towards paying off your student debt. Easy :: breezy.

If your mom doesn’t want to buy shit tons of energy drink so that a tiny portion of that money may trickle down upon you :: then she hates you … find a new mom.

After the {mostly subtext} declaration of the new retailing requirement … there was almost no talk of retailing for the remainder of the six-hour bullshit-a-thon. More like …

But the overarching theme of the day seemed to be :: “they say we’re a scam … but we’re not.”

Being the super sophisticated fake robot that I am :: along with ingeniously disguising myself as a nerdy white boy … I rather deftly hid a camera inside of my telephone. The resulting footage was terrible … just like this fucking event.