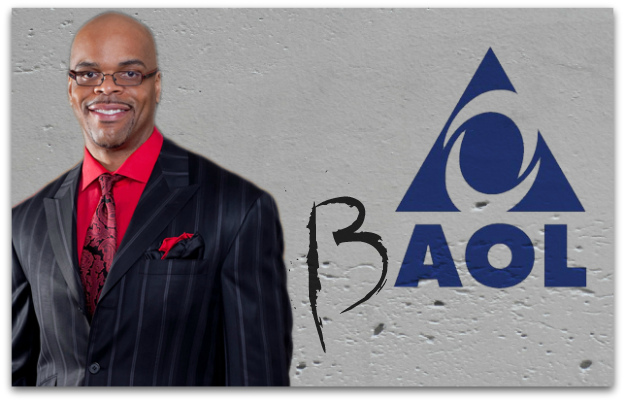 Did you know that black people like using the Internets just as much as white people?

But the blacks have high standards :: having grown accustomed to special but equal facilities created with their specific concerns in mind … or something. They can’t be settling for no white man’s Internet … I guess.

Maybe those are some of the considerations that led Stephen Pierce to found Black America Online {or maybe it was the love of other people’s money}.

“The business plan circulated by Black America Online in December 1995 reads like a golden opportunity. The company projected it would have 2,500 subscribers within six months, 22,500 by the end of the first year and 30,000 six months after that.

For those 12 months, BAOL would rake in more than $3.8 million in revenue, with a profit margin of at least 70 percent, according to the projections. By 2000, the company would be clearing $17.6 million in revenues and $10.5 million in profit.

“Who said it has to be hard?” reads a statement tucked in with the projections.

Just as impressive are the descriptions of BAOL’s top executives, brothers Stephen “Roc” Pierce, 27, and Thomas “Pakii” Pierce, 28. The business plan calls Stephen Pierce a “self-styled aggressive marketing guru” who was “rapidly becoming one of the nation’s most successful debt negotiators and marketing consultants.” Thomas is billed as a “skilled decision maker” and a “dynamic speaker” with experience in business administration.

But what appealed most to potential investors was their ambitious social agenda. The Internet, they said, could be used to educate blacks.”

Stephen Pierce is going to save the blacks! This is awesome … they must be so excited.

“We feel that as high entrepreneurs, we have an obligation to educate and inform our community,” Stephen Pierce said in an interview with Sun Reporter, a weekly San Francisco newspaper.

“We know that African Americans are lagging behind other groups in Internet use, but the numbers are improving. We want to help not only for our own benefit, but for the benefit of children who will have more educational resources at their disposal, businesses that will increase their bottom line and black people in general who are missing out on the wealth of information in cyberspace.”

Children are the future :: Whitney Houston told Stephen “Roc” Pierce about it in a hit song :: and he believed. It’s all about the children … and the blacks … and did I mention the blacks?

… dot dot dot … give me your mother fucking money!

It sounds like a bad idea :: and it reeks of the exploitation of a dreadfully serious battle fought by many generations of brave souls … but …

The company won enthusiastic write-ups in trade magazines and newspapers. Stephen Pierce was even scheduled to speak at a seminar to be held by Black Enterprise magazine.

Joe Madison, a D.C. radio talk show host with WWRC-AM, said the Pierces signed him to a contract to be a spokesman for the company.

“He said they had a lot of investors, and it was a growth company,” Mr. Madison said. “I said, Well, this is a new arena, especially for African Americans. And it was wide open.’ My position was: Let’s give them a chance.”

When Stephen Pierce showed up at his Montgomery County home, Mr. Madison recalls, he arrived in a chauffeured limousine. The two sat down at a computer and watched as BAOL’s chat room filled up with subscribers.

“I was just impressed,” Mr. Madison said. “Everything he said seemed to be in place.”

The Pierces inspired similar confidence in others who invested in BAOL. One of them, Denver clothing designer Brendalinell Carhee, fronted the company $50,000 in cash and equipment and even helped arrange a corporate credit account with American Express.

But alas :: this is The Salty Droid so I’m sure you can guess where all this blacktrepreneurialism is heading …

It wasn’t long, however, before she and other associates started noticing troubling signs at BAOL. The company’s server was often out of service, and subscribers sometimes had to communicate through America Online to get access codes to BAOL.

Funny … but not good.

The “company” only lasted a couple of months.

But by the end of the year, BAOL was off line for good. When Ms. Carhee and other investors and business associates started trying to find the Pierces, they said, their phone calls went unanswered. Eventually, the Pierces’ phone numbers were disconnected.

“They, to this day, have not sent a letter, a postcard – nothing to the people that invested money,” Ms. Carhee said.

BAOL’s publicist, Hyattsville-based Leslie Communications, also has tried in vain to find the Pierces so it could serve them with a civil suit. According to company President John Leslie, the Pierces owe more than $3,000.

On New Year’s Eve, Ms. Carhee received a letter from American Express demanding that she repay $18,000 that had been charged on BAOL’s corporate credit account. The charges, she said, included televisions, stereos and clothes.

“I just about lost it,” she said. “There was not one thing on there related to the running of Black America Online.”

“When Ms. Carhee looked more closely into the Pierces’ background, she said, she discovered the company had been run out of the home of the brothers’ parents. Stephen Pierce, she said, never finished high school. And neither brother had any prior computer experience …”

Gosh :: this Stephen Pierce sounds like a real piece of shit … maybe he should get into Internet Marketing.