$53,000,000 :: fifty-three fucking million … that’s how much money the government claims 1500 investors around the world dumped into the bottomless fraud coffers of Senen Pousa via Mike Dillard.

It’s a depressing shit ton of money … I was much happier not knowing.

The U.S. Securities and Exchange Commission lays it out in their complaint …

“During the relevant period, IIC and Pousa have accepted at least $53,000,000 from an estimated 1,500 investors in the United States, Australia, the United Kingdom, Canada, Germany, the Netherlands and Singapore. They have done so by using emails and sophisticated internet webcasts, and webinars sent directly to investors via their websites… Pousa has also solicited investors for his fraudulent scheme through a third-party website called The Elevation Group …

In May 2012, investors learned that Pousa’s offering was a massive fraud.”

Pretty much :: maybe “sophisticated” isn’t the best adjective to describe webinars … but I guess it’s hard to gain a proper perspective on the webz while browsing from IE6 on your government issue Windows XP computer.

The U.S. Commodity Futures Trading Commission :: once fronted by geekcore rockstar Brooksley Born {who no one wanted to listen to because she was actually talking sense} … is also involved in the enforcement action.

It was the CFTC that came after Stephen Pierce in 2003 for his association with Todd Snively and the Futurewise Trading Group. That case was $6.27 million from 900 “investors.” Snively was the not licensed “trading” arm of the scam {like Pousa here} … and Stephen Pierce was the Internet Marketer {like Dillard here}. Nipple Pierce paid $25,000 and walked right back to scamworld … Snively did time in federal prison before moving on with his life.

In most quadrants of the criminal underworld :: you don’t snitch … it’s like the golden fucking rule and stuff … violators will be prosecuted to the fullest extent of the you just got gunned down by the dumpster and no one reported you missing for two days. Scamworld has no such rule :: no such code … once the sirens sound it’s every fake man for himself and his own need for a bigger boat.

The CFTC has entered a consent order against Dillard :: which he has signed {like Frank Kern did his FTC consent order} … basically agreeing to totally eat it now in the hopes of avoiding an even worser amount of totally eating it later. Along with rather open-ended disgorgement and damages provisions :: the order contains this “do snitch” provision …

With Mike Dillard’s helpful help :: it sounds like Senen Pousa will be needing a big wad of those ill-gotten gains to hire super expensive criminal defense attorneys like James Arthur Ray did :: except that his assets have just been frozen and a receiver has been appointed to unwind his webs in the hopes of recovering some monies for his victims … exactly what should have happened to James Arthur Ray while Detective Diskin was spending many months investigating the manslaughters.

The SEC and CFTC looked closely and thoughtfully at substantial amounts of evidence before making decisions on who to name in their complaints and what charges to bring. The SEC determined that they would not include the Elevation Group in the case filed today.

Maybe :: for now … but no question that the majority of the fraud was on Mike Dillard. Fraud is about deception :: and Mikey D-bag was {and is} responsible for bringing the people in … and then hooking them through the lip of their insecurities from his lie pulpit. I’m forced :: by the facts … to admit that he’s quite good at it.

Either way … Mike Dillard is a fucking fraud.

Even thought we cooperated just as fully with the CFTC, their laws have a technical provision tht says that we should have been registered before telling anyone about Senen or the other Fraud Defendants.

You mean the “fraud defendants” about whom you said …

We’ve done an incredible amount of research on our end, and I trust the man with my life. That’s all I have to say on the matter, and will not address this thread further.

… before unceremoniously deleting dissent from your customers/victims?

And yeah our laws have a “technical provision” whereby you must have a couple of licenses or six before you’re authorized to make highly leveraged trades on global currency exchanges with $53 million in customer funds :: or to peddle the services of someone who does the same … but you rat bastards had none of that. Technical oversight.

The fraud is all in the pitch :: it’s right there for everyone to see … but what happened after that still remains a mystery. While I’ve clearly stated that Mike Dillard should be the priority target here :: being the bastard higher up on the bastard food chain … I do doubt that he had much to do with the actual 63% trading loss part of the debacle.

2) It happened too fast for people to blame themselves …

5) A huge trading loss perfectly illustrates what a ridiculously dangerous joke is The Elevation Group.

Mike Dillard and I have been not-friends for a long time now :: and I hope that the devil painfully sucks his soul out through his squinty eye holes and nails it to the wall of some dirty public bathroom along the Jersey Turnpike … but I think he’s pretty damn good at this game and wouldn’t make such ass stupid mistakes. Did you hear that Mikey D-bag? It was a compliment.

Other hands :: I was pretty shocked when he launched The Elevation Group … because it’s seriously begging for it … even without the instant-mega-losses. Not smart.

“Pousa exploited the Internet to communicate his fraudulent investment services to a worldwide audience,” said Kevin Edmundson, assistant director of enforcement in the SEC’s regional office in Fort Worth, Texas. “This is a good example of how regulators around the world work together to enforce securities laws for all investors.”

Yes it’s a good example :: of how regulators come in too late to stop the harm :: take the actions least likely to prevent future harms :: don’t get to the root of the problem … and then fucking boast about it like they are the effective regulators that they believe themselves to be when they’re at home drunk watching The West Wing reruns.

The SEC and CFTC are market regulators :: cleaning up Internet Marketing isn’t in their mandate … but $53,000,000 in a single score says it fucking needs to be somebody’s. 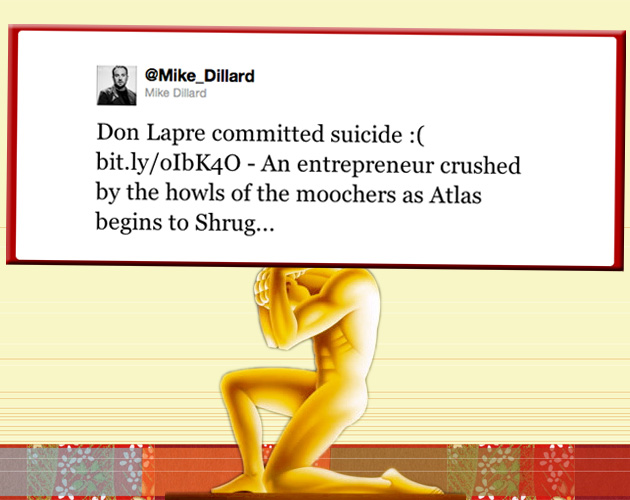 Please fake Atlas :: I’m begging you … shrug yourself into a coma.