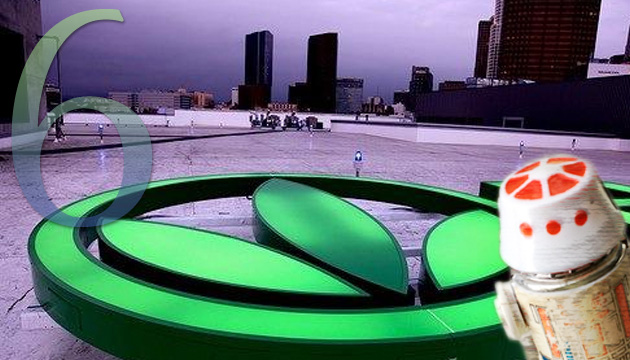 “This can’t be fucking happening” … is how I’d sum up the year in fake robotic sentiment. Not exactly a fresh sentiment around here I know :: but it’s deeper now … darker … bleaker. Because :: yeah … this is fucking happening … and there’s no more me hiding from it.

For five years I’ve been waiting for my fake secretary Debbie to do something right :: while swirling down into this jack{ass}rabbithole of doom … comforted … at first … by my own ignorance.

Five years of The Salty Droid :: from Perry Belcher to Herbalife :: in watery metaphors …

Hear that badguy d-bags? Post it to your private facebooks … tweet it to Kevin Smith … pay $6500 to have a local “news” program run a bullshit segment about it. I’m fucking pointless :: and now … even I know it.

I can not win.

I will not win.

The year started so promisingly :: with Bill Ackman’s dazzling arrival on the scamworld ocean … feeling something like a {slightly Jewish} Christmas miracle. He made what seemed for everything like a principled stand :: giving an authoritative presentation of highly factual information :: placing a capitalist’s goldeneye popping billion dollar bet … and pledging to ride out the waves until Herbalife sank to zero.

Of course :: Herbalife’s stock falling to zero would do absolutely nothing for its tens of millions of victims :: and it would do equal amounts of nothing to prevent future victimization … because there are thousands of other similarly vicious scam operations waiting to instantly soak up Herbalife’s sadness marketshare. But I am adrift in an ocean of sorrow {ready to cling to anything} :: and this dude captains a huge battleship … and rides {one imagines} on all the king’s horses.

A small :: but meaningful {dare we hope tide shifting?} … moral victory was sure to follow. At the time :: I was researching and writing a feature article for The Verge {at their request} about Mike Dillard and Senen Pousa {which The Verge quite rudely failed to print … without explanation} … and had several other previous commitments sucking up my time until July-ish. I thought I’d likely miss my chance to contribute to this important win. Because how could any one scam company hope to survive that kind of focused pressure for long?

But hey :: no worries there :: cause all I missed was an epic fail.

Wall Street’s institutional elite lined up to openly support the exploitation of the already struggling. The company hired some of the country’s best lawyers :: lobbyists … and spin spinning PR firms … all of whom gladly accepted huge piles of blood money to put lipstick on the zombie pig. The government did nothing … and said nothing. The former mayor of Los Angeles :: a former U.S. Surgeon General :: and former Secretary of State Madeleine Albright … sold their credentialed credibilities to help keep HLF’s latino scamming machine operating at full steam. All but a very few reporters :: remained completely fucking useless … and did NOTHING even remotely resembling reporting.

The stock price more than doubled … and Herbalife reported recording their biggest ever year. Our markets :: and our society :: have spoken in a clear voice …

“We are in favor of fraud. We need fraud. Our fraud is too big to fail.”

Herbalife expanded into its 86th country … Cambodia. Local resident Heng Sothy knows just why he :: like so many others across the impoverished developing world :: is willing to risk everything to give Herbalife a try :: as he told The Cambodia Daily …

“They come from many of the good democracy countries: America, European, Australia, and they make money. Why would they lie to us?”

Why … indeed. Trust me Heng Sothy … you don’t want to know the answer to that excellent question. But maybe this Atlantic profile of affiliate marketer Jesse Willms :: The Dark Lord of the Internet … can help explain it a little.

Regardless of what you might think of Willms’s business ethics, no one could argue with his results.

So yeah :: that’s pretty much it … you’re welcome? Welcome to team democracy?

Jesse Willms is fucking bigtime :: for sure … but DarkLord? No way. As a {now long time} observer of such things :: I’ll tell you :: here’s the standout aspect of his personality :: the origin of his staggering {and continuing} unethical success …

“Yet his former employees say the carousing never impaired Willms’s focus at work. “Jesse was always there in the morning, punctual like everyone else,” one former employee told me. “He would take a jet out to Vegas on Friday after work, but then he would be back on Monday morning, not hungover.”

Boom :: respect … otherwise … he’s up to nothing too original {including the immensity}.

As the federal government’s primary consumer-protection arm, the FTC was the agency expected to do something to address the issue, yet it faced a major problem of scale: it was one Wyatt Earp among thousands of Internet swindlers, many of whom had disguised their tracks with shell corporations.

The federal government is the little guy? Yep :: and Wyatt Earp is a super-fucking-flattery descriptor … try Barney Fife.

Regulatory authorities like the FTC are undermanned; courts seem reluctant to punish offenders; and worse yet, even the sheriffs we believe are imposing order online—Google, Yahoo, Microsoft—often end up providing scammers with a platform for deception. To understand Willms’s success, then, is to understand a much larger expanse of the Internet’s seedy commercial underbelly, along with the hazards it poses to anyone who ventures online.

Dirty money owns :: and operates … our most important lands … against our interests … to the great advantage of all the worst things.

I have spent a lot of time away from this site these last two years :: trying to parlay my small successes here into bigger things … from bigger people. But it turns out that the dirty ocean makes us all the same amount of tiny :: there is no one big … so it’s back to focusing on the moob jokes.

Jason is feeling dire :: and wanted me to tell you that year six might be the last year of The Salty Droid :: because he is weak :: and wounded … and fucking brain tired from all the futility. But I refuse to allow that stupid shit. That it is so bad :: that it is fucking happening :: that we can’t possibly win … is exactly why we’re fighting.

Takin’ um down a big fat notch :: one at a time … with truth + jokes. It must be better than nothing :: which is something … and that’s enough.

If I was an Herbalifer :: I’d end this post with an encapsulating quote from the late {not great} Jim Rohn … maybe something like …

If you don’t like how things are, change it! You’re not a tree.

But I’m not an Herbalifer {or a tree} :: I’m the motherfucking SaltyDroid … so I’ll encapsulate the beginning of year six by quoting the fake baseball philosopher Kenny F’in Powers …

My story is the story of a raging Christ figure who tore himself off the cross and looked at the Romans with blood in his eyes and said “my turn now, cocksuckers.”