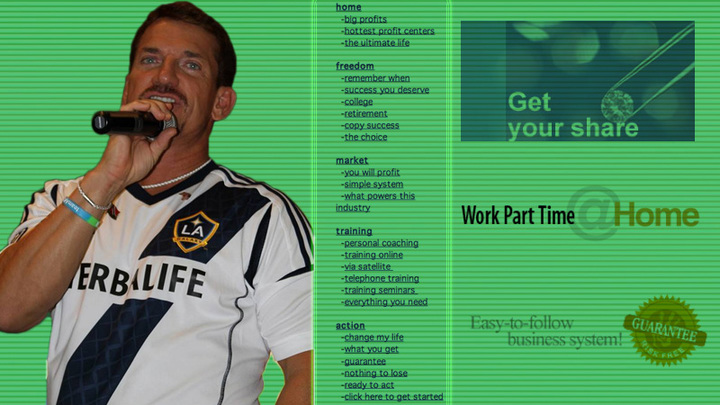 … is what Herbalife President’s Team member Michael Burton said to me :: unconvincingly … this past fall when I was fake robotic questioning him about his various scum sucking.

“I will be sharing the great health results of the products with people and possibilities of how Herbalife can help as long as I am on this planet.”

Says he … sounding so serious.

How can Herbalife help you with your possibilities?

I’m glad you asked :: let’s take Michael Burton as a specific example … because the personal success stories of individual distributors {who have every possible incentive to lie} are at the core of Herbalife’s marketing and sales process. “Get yourself a story” :: noob Herbalifers are repeatedly told … you can’t have success until you have a story of success. It’s like the chicken and the egg situation :: where the chicken is a lie … and the egg is also a lie. Which came first? Who cares? Fuck liars … let’s eat a chicken fried egg sandwich.

As the story goes :: Michael Burton used to be the fat-n-proud owner of some {prolly used} car dealerships :: when those failed … he and his family were driven into bankruptcy. But then glory hallelujah :: god of pyramids be praised :: he found Herbalife … and now he’s parading around in his fucking underwear … flexing his abs and stacking up a cash menagerie.

For more than a decade :: Burton has been an over-tanned ever-present on the Herbalife seminar scene … held out by his peers {and his company} as a representative of the stunning success Herbalife has made attainable to the average everyman. This dummy can do it … and you can too!

Here’s a typical Burton deployment :: taken from a biz op pitch given by crazy persons … David and Karen DeSaegher. 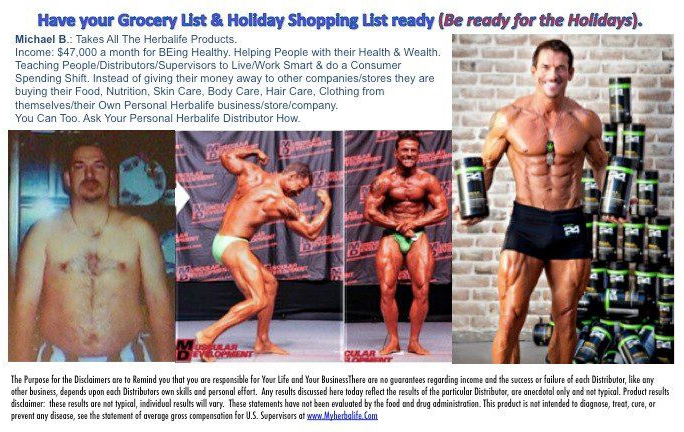 Instead of giving their money away to other companies/stores they are buying their Food, Nutrition, Skin Care, Body Care, Hair Care, Clothing from themselves/their Own Personal Herbalife business/store/company. You Can Too.

But an examination of Burton’s primary hub-and-capture site over the years :: doesn’t show much selling of pants/BodyCare/Food :: it shows Michael Burton doing what almost every other top distributor was doing … selling an IM biz op to blind leads generated by totally fucking massive mass market media buys. A complicated sentence :: summed up succinctly by the site’s name and banner …

WorkPartTime@Home 2001 - Michael and Michelle knew that people were getting wealthy from the growth of the Internet, but they also knew they had no way to access the hundreds of thousands of dollars that it would take to start up an Internet company. The dream of becoming wealthy from working at home seemed out of reach until they were introduced to this turnkey system.

Internet Marketing for the Multi-level Marketer :: the unicorn’s unicorn … and the shape of Herbalife’s North American operation … until just right now recentlyish.

WorkPartTime@Home 2003 - We went from bankruptcy to making over $30,000 a month in less than 2 years! The best thing is that anybody can do it, just like we have!

You can like :: totally … stay @home with your cats and everything.

WorkPartTime@Home 2006 - Thank goodness someone that knew of our declining financial situation gave us a package of information about a home business, very much like the one we are offering you here on this website.

Thank goodness :: excuse me sir :: could you tell me where I might buy my shake today?

WorkPartTime@Home 2013 - One of America’s top publicly held companies will help you open your own home business. You could earn up to $12,325 your first month…

Victims came to the website after seeing/hearing/reading/clicking an advertisement for a work at home business opportunity … no mention of selling Herbalife powders. From the website :: they ordered a “decision pack” … and that pack had Burton pitching them on a new kind of MLM operation … an Internet-based op that had forever eliminated the necessity of recruiting friends and family {and people in line at Walmart}.

The purpose of the WorkPartTime@Home decision pack :: was to sell 4000 volume point Herbalife supervisor orders … and to get people signed up for Burton’s shadow scheme … Global Home Business Systems. For a series of stiff fees :: GHBS could turn your old fashioned vitamin MLM into a new fangled Internet Marketing business … which would burn the fuel of qualified leads … also purchased from Burton and GHBS.

If you’re thinking that this sounds EXACTLY like what Anthony Powell was doing :: EXACTLY like what Doran Andry was doing :: EXACTLY like what Shawn Dahl was doing … then you are EXACTLY right. For the last 15 years :: the entirety of Michael O. Johnson’s reign as HLF CEO … this was the daily mode of operation building Herbalife’s North American business. And the people :: and the personal success stories … from the North American business {wrapped as they are in aspirational ideas about democracy and the American Dream} are the anchor of Herbalife’s global business. An anchor of oily sand.

No one at Herbalife :: including Michael Burton … will bother trying to justify the manipulative morally repulsive {fucking fraudulent!} bullshit permeating Michael Burton’s websites … because it can’t be done. Herbalife just wants to pretend like what happened :: never happened … and dipshit fake reporters like Duane Stanford at Businessweek seem more than happy to oblige.

Michael Burton was surprised to learn that I had his horrid decision pack videos :: pretending to forget about how he produced DVDs telling people to cash out their retirement accounts … and then sent them around to a gobsmacking amount of potential victims pre-selected for their fear and vulnerability.

But yeah :: I fucking gots it … and I did this with it to help him remember.

Write this down … just put it on a credit card.

In 2013 :: WorkPartTime@Home finished disappearing … as did the rest of the Internet businesses that have kept Herbalife alive all these too many years. Huge hordes of people signed up to “work from home” :: “no pitching to friends and family” :: “the prospects will come to you” :: but the terms have been changed unilaterally … and now they’re facing a new reality at bury-the-bodies Herbalife. Here’s Michael Burton :: telling me about how it’s not like it was before …

It’s not about the truth with u , I am committed to my teams success I work with my guys like crazy all we do us nutrition clubs and fit clubs and face to face every freaking day working with people to lose weight or get in great shape to take on a healthy active life style , anything else u may “ have on me “ would be from years past and u are on a mission to discredit Herbalife and now me to try to prove your point… 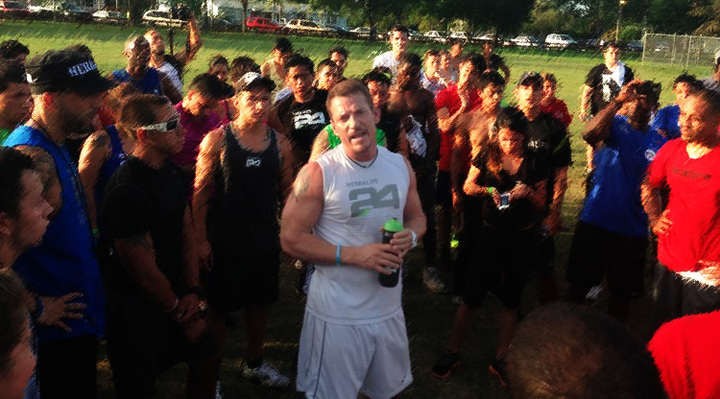 On July 29th :: Michael Burton filed a $7,124,893 bankruptcy … seven times as large as his pre-Herbalife bankruptcy {and the number is sure to grow because many debts are listed as size “unknown”}. I applaud him for doing so :: because it’s one of the most fascinating scamworld documents I’ve ever seen … and I’ve been staring at it for months.

Rich :: millionaire :: super successful :: Michael Burton … fucking isn’t. He owns no property {his foreclosed upon mortgage part of Bear Stearn’s toxic sludge} :: he has no savings :: his cars are leased … his income is far {so far!} below what he has forever been claiming in his sales materials. He and Michelle are keeping separate households :: so his share of the “working every freaking day” monthly income is $6,500 … not bad of course … but he did have to tell people to leverage their retirement accounts in order to achieve it … and it is not sufficient to cover his expenses.

And you can too?

Michael Burton owes himself :: Worldwide Nutrition Group … $150,000. I guess if you’re going to buy from yourself :: you may as well lend to yourself … an economy of one. Don’t tell Ayn Rand :: but even economies of one have to pay the tax man … which Burton apparently failed to do … because he owes the IRS more than a million unbankruptable dollars … and has tax liens up the ying yang.

… shipping companies aren’t in the business of extending long-term credit :: so those crazy ridiculous numbers might well be just a single month of Burton’s operation.

… all names that come up repeatedly when one is investigating “successful” Herbalife distributorships :: companies responsible for producing and distributing quality adverts like this piece of shit television commercial I’m sure you’ve been subjected to more than a hundred times …

This little number rocked over 2 million leads for an Herbalife Distributor.

These operations were fucking ginormous :: the externalized advertising budget of a multi-billion dollar public company … the game so much bigger than the silly little players.

I will {of course} admit {because it’s true} … they fucking killed this shit. Like :: almost … in one fell swoop. Almost like they could have just done it {had they wanted to} :: at anytime … during these past fifteen years. Almost like … this thing was totally fucking centralized.

They cut off their arms :: and their legs … because they don’t want {their stock} to die. They’ve replaced the cutting edge of scam :: with the “remember the 90’s?” of scam … and the always tenuous exploitation of global poverty. Two modes which {I will prove in the coming months} are every bit as scammy :: while being far less …

The switch from the new to the old wiped out the always lying Michael Burton in an instant … but somehow it had no effect on Herbalife proper? Some d-bag Wall Street d-bag called Tim Ramey named HLF his best stock idea of 2014 …

“Perversely, the inquisition HLF has endured for the past year has made the company better with a few ‘raising the bar’ policy tweaks on product returns and ‘lead generation,’” Ramey says, adding that the company has posted 19 consecutive “beat and raise” EPS quarters in a row.

“Policy tweaks” :: my motherfucking ass … this was a foundation shifting earthquake … which HLF has yet to survive. Because :: as I shouldn’t need to remind Wall Street … cleaning up toxicity is expensive … and greedy people don’t like to be fucked out of what they see as their due.