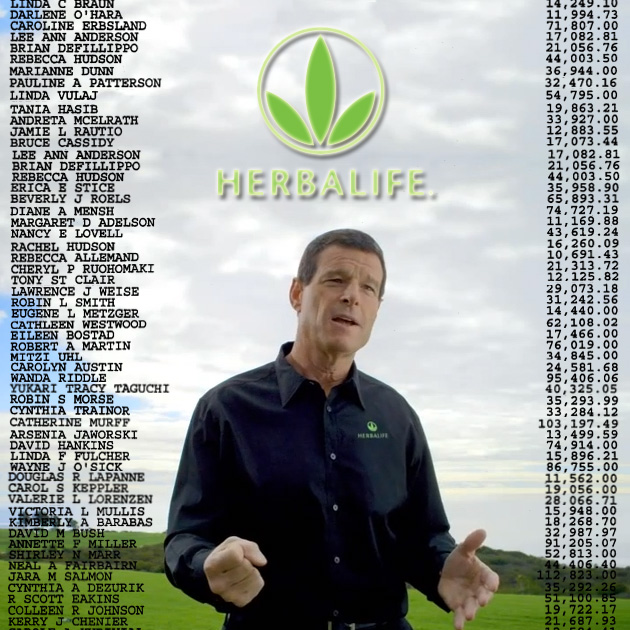 Not many families can functionally recover from a five-figure loss :: but Herbalife CEO Michael O. Johnson and his family certainly could … because he’s spent the last decade profiteering handsomely from hundreds of thousands of other {much poorer} families sustaining such losses.

Pictured above {and below} are just a tiny subset of those very real people :: with their very real losses … detailed as part of a 2005 class action settlement between Herbalife and 2600 of its unlucky victims. Anyone still under the ignorant misimpression that the Herbalife story is about billionaire hedge fund managers {_I’m talkin’ to you William Cohan} :: should spend a few hours reading that list of names out loud to themselves … until the stark reality of the situation starts to sink in and cause the proper level of outrage and existential crisis.

The lawsuit focused on a massive Herbalife lead generation scheme :: tastefully {and not at all fraudulently} titled … Newest Way to Wealth. Documented losses from NWTW/Herbalife victims coming forward to file claims in the case {a very small percentage of the total victims} :: greeted Johnson as he arrived on scene as Herbalife CEO … and totaled about $20 million.

It’s so much money :: spread out over so few middle class people … over such a tiny time period. These aren’t “I’m going to sell this Cookies n’ Cream powder to John Hempton on Craigs List” type of losses :: it’s more like “I’ve ruined everything … my spouse is leaving me … I want to die.”

Doug Brooks :: the attorney who brought the case … made sure that this horrifyingly realistic list of victims was preserved for the record … by submitting it as a comment to the FTC’s purposed business opportunity rule {a rule which was completely eviscerated by MLM __lobbyists gone wild}. And that’s where I found it :: trolling around on ftc.gov … like all the best internet hipsters are doing now … ftc.gov is the new twitter five years ago {please retweet}.

… is what Mr. Brooks told me :: when I asked him if he had been surprised by the scale of the losses. He’d already been fighting with the unicorns for years by that point :: having brought other protracted MLM cases … but it’s hard to get jaded enough to stop being jaw-dropped by the epic nature of these frauds.

Unless you’re Carl Ichan I guess :: he’s totally cool with it … he can just read down that list of names and tell himself that it’s all just profit and loss … ink on paper … not real people … and not real families … at least not real enough to worry about like he and his family. Fuck sympathy … and fuck empathy even harder.

A small collection of Herbalife’s top recruiting producers :: like Anthony Powell :: Doran Andry :: Steve and Debbie Combs … were said to be the assholes behind Newest Way to Wealth. The incoming Johnson could not have failed to notice the ongoing litigation :: because as the complaint notes …

[A]n attorney for individual defendants Powell and Juneja, advise Herbalife that “T.J. [Juneja] and Anthony [Powell] believe that the purchases and sales made by the 10,000-12,000 Herbalife Distributors who are affiliated with NWTW represent somewhere between one-third and one-half of Herbalife’s North American volume.

Newest Way to Wealth did the bulk of its damage towards the end of the 90’s :: and although that was before the web became the all powerful center of the universe … the scam was shaped remarkably like Shawn Dahl’s Online Business Systems. That’s because the shape of these pyramid-within-a-pyramid scams have remained little changed since the early days of Amway.

Here’s how it basically works at most old-school MLMs …

Only the owner of the MLM makes fat monies. A select group of distributors :: often selected before the launch of the scam {as is happening right now with Rippln} … will be designated to have flashy cash flows so they can shill their massive success to the masses … but they’ll only be netting decent money {think lawyer or doctor type wages} because of the high cost associated with lead production. This mostly closed group of top distributors are then allowed {although usually not formally} to sell “this is how you can succeed at MLM like me” frauducts to the people in their downline.

Selling “how to succeed” frauducts that cost many multiples of the underlying MLM front product :: is how most {if not all} top-level distributors ultimately do succeed at bringing home the fat monies. The lawsuit explained it like this …

You scratch my back :: I’ll scratch your back … and we’ll both gouge the shit out of that hispanic senior citizen’s back.

But it’s not an “additional incentive for senior distributors” :: it’s the primary way top distributors are compensated … throughout the industry. And while MLM motherships like Herbalife like to pretend it’s not the case whenever scrutiny comes calling …

It was not until shortly after the filing of this lawsuit, however, that Herbalife finally took some action to enforce its rules and contractual requirements regarding earnings claims and other misrepresentations.

… the truth is that they can’t genuinely enforce their lip service rules against top distributors without imploding the pyramid. Which is why after this case settled :: and Newest Way to Wealth was officially disbanded … all the major players involved stayed at Herbalife and continued scamming … same as fucking ever.

When Anthony Powell did finally leave the company this year :: more than ten years after the NWTW class action was filed … Duane Stanford at Bussinessweek dutifully printed HLF’s self-righteous response.

“Anthony Powell’s stated focus is on creating ‘explosive growth’ fueled by lead purchases,” [Herbalife] said in an e-mail. “As he has also stated, this is `a difference in philosophy,’ not consistent with Herbalife’s focus on building business through the daily consumption of our nutrition products.”

But Doran Andry is still one of Herbalife’s top distributors :: and according to him … his “distributorship has generated over $3.2 billion in sales during the last ten years.” During that time Doran has been hawking his Financial Success System :: unimpeded by HLF’s rules or philosophies … to the more than 400,000 distributors he claims to have churned through his downline.

This is an example of the sort of blind lead generation site that Andry used to do billions of dollars worth of damage over the last ten years. It makes no mention of Herbalife :: and it’s no shit called … Hope For My Family dot com.

“Hope” might be an inaccurate way to describe catastrophic losses.

Other top distributors have run side businesses selling sales leads and “business methods,” such as a suite of tools including chat- and sales-tracking software, to colleagues to help them boost sales. Under Johnson, Herbalife has banned distributors from owning such companies.

… while still calling himself a journalist at cocktail parties.

Here’s an HLF recruitment picture of Doran Andry’s gaudy custom built house … and exactly how he fucking paid for it. 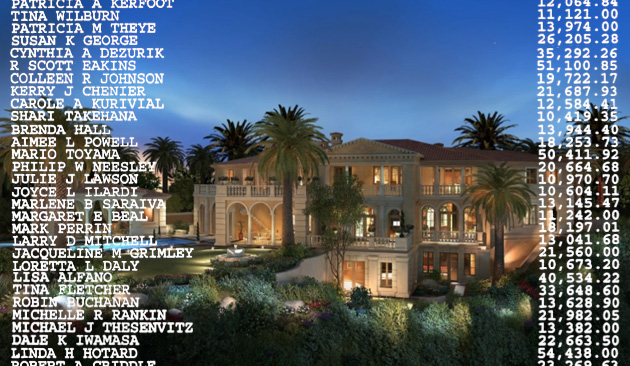