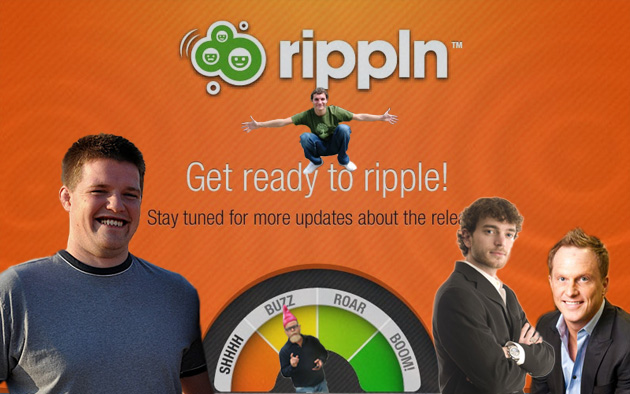 One ripple creates another ripple in a beautiful sequence of ever repeating ripples until :: !!boom!! … holy fucking shit you’re so fucking rich right now. You make Warren Buffet look like Ed Dale :: and all you had to do was sign up for a free app … or something … it totally works.

According to the lie-marketing :: Rippln is going to be bigger than Facebook + Twitter … so text your mom about this opportunity right away.

“In fact, some are saying it’s the biggest breakthrough since email.”

In fact :: some are saying “in fact” when they mean … fake fact.

Sign people up for a “free” app that’s going to be bigger than Jesus. It’s like :: instead of being on Facebook … now you own Facebook. You’ll finally be getting paid for being so totally uninteresting … you knew this day would come.

When you tell your friends and family about Rippln :: and they sign up … they {and anyone they add} will be added to your downline … er … I mean … ripple.

Watch your ripple grow on the app {cause there’s not much else to do there} :: and think as hard as you fucking can about unicorns. 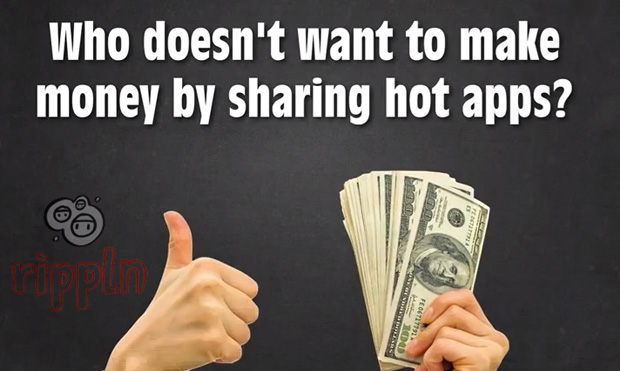 Rippln is “free” :: as long as all you want to do is view scamvertisements … and consume shit frauducts. But if you want to make them sweet sweet Facebook type monies :: then you’ll need to buy your way into the pyramid … er … I mean … ripple.

There will be several levels of buy-in :: each level will have its own Presidential Global Online MegaTeam type name … and will be priced at approximately double the previous level. Ripplers will be encouraged to prove that they care about their families and society :: by buying in at the most expensive level … and by encouraging others in their ripple to do the same.

Expensive seminars will be held every couple of months to keep everyone buying :: and selling … Rippln levels.

Inside the app :: the top ripplers {the only ones making any money} will sell “educational” products promising to help unprofitable ripplers turn their fake businesses around. These products will not help at all :: but they will further facilitate the transfer of funds up the pyramid … er … I mean … ripple.

I’m not sure if you’ve heard of Rippln yet or been offered a “pre-pre-launch” position with someone.

Well, it wouldn’t be fair of me to not tell you that if you’re going to position yourself, there is only ONE team you should join.

It wouldn’t not be fair :: position yourself for the pre-pre-launch … the writtens of a ripple gnome are irresistible!

Mike Filsaime wants us to join Rippln via :: The Tsunami Project … what milk-fed-fat-boy Russell Brunson tastefully calls his Rippln downline opportunity. Remember when those tsunamis killed all those people and caused a nuclear disaster? It’s just like that I guess :: but also kinda like Facebook.

Forced continuity is among the many dirty tricks that currently has Utah’s Ginger King :: Jeremy Johnson … facing an 87 count criminal indictment with a liquidity sucking FTC suit as a chaser.

Brunson and Johnson also have soul smacking :: senior citizen destroying … boiler rooms in common. Johnson was part of an enormously successful Utah ring that’s done billions and billions of dollars in damage :: Brunson had his own Boise based operation … which managed to do millions and millions in damage in spite of BeefCake Brunson being a silly stupid sack of shit. 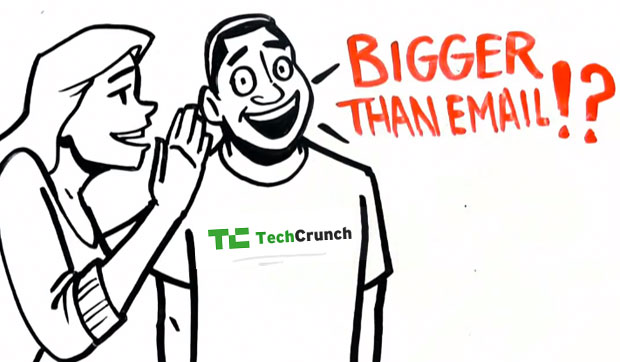 Brunson’s barely literate voice graces the majority of the Rippln pitch videos :: including the one embedded above … which managed to rankle Ryan Lawler’s TechCrunch panties into a bunch.

So here’s a step-by-step for what not to do in your startup video:

Yeah don’t do any of that stuff :: unless you want your scam to be successful … then definitely do do all of that stuff. Gosh :: Ryan Lawler … maybe don’t talk about shit you don’t know shit about?

Driving home after a basketball game one evening, he hit a deer, flipped his truck over four times, mangled his arm and almost killed himself…

Mureta is now an app entrepreneur and, in good Tim Ferris style, travels around the world as a member of what he calls “the new rich”.

… said TechCrunch :: about an app unicorn … before it had even friggin’ been released. Oh the fucking irony {of how much that wasn’t a parody}!

One of Mike Dillard’s monkey boys :: Jonathan Budd :: is calling himself a Rippln co-founder … and showed up in the TechCrunch comments to do a little bullshit parading.

We’re honored to be a part of the conversation here…and look forward to clearing up a lot of the mis information, & opinions people are offering about our company.

It’s difficult to deny the effectiveness of our opening marketing at this point, judging by how we are having this conversation on techcrunch’s blog…

By which he meant …

Laugh it up Ryan Lawler you stupid bitch :: but we’re making all the fucking monies with our ostentatious lies … and your limp {false superiority infused} non-criticisms are only going to help with that. How’s your AOL writer’s paycheck chump? Just enough to afford repairs to your bicycle?

Rippln :: hot “startup” :: as seen on TechCrunch … all the way to the fucking bank! 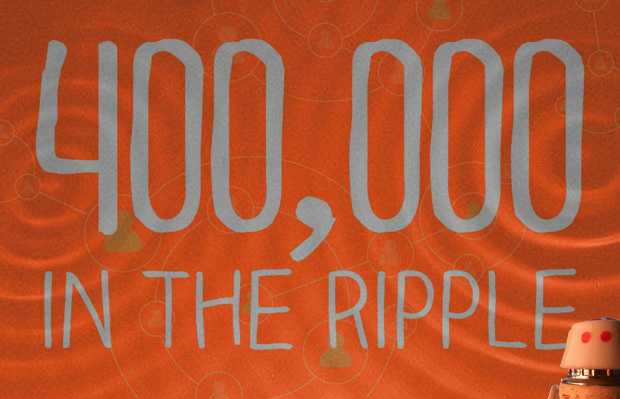 According to the Internets :: Rippln CEO Brian Underwood was formerly a “master distributor” with BurnLounge … an iTunes shaped pyramid scheme busted up by the FTC in 2007. BurnLounge suckered 62,250 people for $28 million :: in just two years of lie-marketing operations. But no one got fucking arrested :: so no one stopped their damn scheming … big surprise.

One of Rippln’s other co-founders :: and holder of the Rippln trademark … is man behind the dirty curtain Terry LaCore. You can read the deets regarding LaCore’s involvement with Rippln on BehindMLM :: or you can just skip right to the guts and read this SEC lawsuit against Terry LaCore … for unlawfully taking $1.2 million in kickbacks from a distributor in some other crap MLM he was co-foundering. Kickbacks help ensure all the monies get to the top of the pyramid :: as Oprah and Tony Robbins hath commanded.

Woodburn and LaCore agreed to settle the SEC’s charges without admitting or denying the allegations of the complaint. 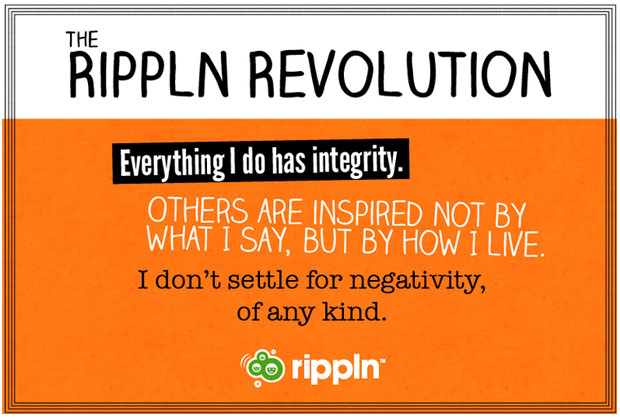 Behind BurnLounge’s Rippln like pyramid scheme :: through the sulfuric haze of what the federal court described as a “labyrinth of obfuscation rather than a readily understood compensation system” … a sadly simple {and too typical} pattern is revealed. Most people who bought into the scheme :: bought in at the most expensive level … because targeted lies are highly effective at moving their intended victims.

The MLM industry is something much more sinister than just an assemblage of assorted pyramid schemes :: it’s organized cult manipulation at an industrial scale … and the results are as grievous as they are predictable.

The fake robot has already shrewdly interrupted the unjustifiably disgusting boiler room operations of Russell Brunson and Anthony Morrison :: but here they are Rippln the ripples together :: all draped in revolution-morality-white … as though their darkness ain’t already documented for the fucking record.

… text your mom :: text your grandma :: text anyone that might still love you … fuck their jobs and their kids and their medical bills and their lives … fuck all that … just buy this American cult unicorn so a bunch of d-bags can snort the proceeds.

“There is nothing to get the attention of people who are dedicating their lives to committing fraud like knowing that they could end up in prison,” he said.

It’s not that complicated.