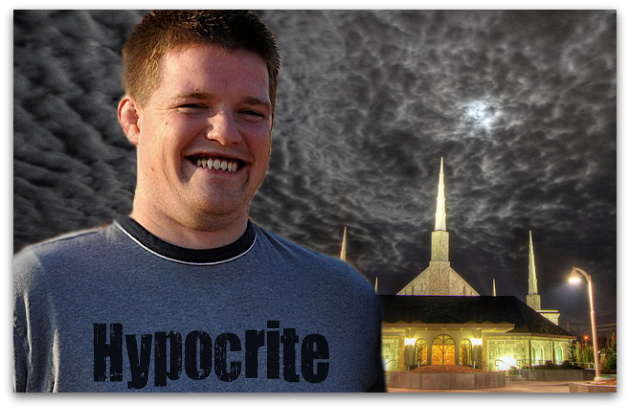 Russell Brunson has had a rough life. Growing up :: all he had was everything :: and you know how hard that can be. Okay maybe you don’t {loser!} :: but that’s your own fault for not manifesting the right kind of parents.

The High Priest of Mormon hypocrisy fought his first round with The Salty Droid last November. Unfortunately for fans of talking turds :: and mirroring ALL of his “important” wrestling matches :: the fat bitch lost! The post exposed Brunson as the owner of a high pressure sales floor that pedophile loving Garden Gnome Mike Filsaime was using to try and fleece people for their maximum remaining credit card balance. Really fucking nice. It also called out the MicroContinuity program as obvious bullshit {duh!} :: and reported that he was trying to sell the company.

Making matters much worse {and much funnier} :: everyone on the staff of Dot Com Secrets pulled up that article and had a hearty schadenfreude chuckle. Brunson came in to an office full of people that were laughing at him :: and he was none to pleased. A meeting was called to decide the fate of The Droid. Resolution: “We will just leave him alone :: he’s rich and powerful and not to be fucked with. No one respond and maybe he will just go away.” {snidely} Well isn’t that interesting? That’s nothing at all like the messages I’d received before the post about how tangling with Brunson was a bad idea :: he was “ready for me” :: blah blah blah.

I can’t be threatened :: and I NEVER go away. Hadn’t you noticed? Tell your “friends.”

While Russell didn’t have the nads to respond :: the same can’t be said for everyone else at Dot Con Secrets. Over the last four months the sales staff of Brunson’s BoilerRoom has decreased from 42 to 11. I’m not a numerologist to the fake stars like Tania Gabrielle :: but that sounds pretty bad to me. And of course :: some pissed off employees talked to The Droid. Because eventually :: EVERYONE ends up talking to The Droid {Do you hear me Joshua Andrew Fredrickson?}.

The first interesting thing to note is that none of the female sales staff have left the company :: because there weren’t any. Not one woman on the sales staff. And don’t bring in a woman’s resume either :: unless you want to be smirked at. NO WOMEN. If the Heavenly Father had intended women to work in sales :: he’d have given them receding hair lines and phones growing out of their heads.

Brunson’s partner in the boiler room business is fellow fake LatterDay Saint Garrett Robins. Robins parades around the floor while the salesmen are working:: running at the idiotic mouth :: telling racist and sexist jokes :: and just generally being a flaming dick. In case you’ve never had the displeasure of meeting Mr. Robins :: here he is giving a testimonial for the life changing power of Brunson’s dotcom miracles …

UPDATE {2/23/2010} :: Russell removed this video from YouTube and his testimonial page just hours after the publication of this post … maybe because it was per se fraud. Good thing for justice that The Droid made a copy. FTW!

… posing as a neutral … making up figures … and he’s never actually used the programs because he’s too busy mismanaging a high pressure sales floor.

The salesmen know very little about the Internet :: and nothing at all about Internet Marketing. They’re just people in need of jobs. Fortunately for them :: the marks that they are calling also know very little about the Internet. The sales scripts are centered completely around the manipulation of emotions and self esteem … no business acumen required.

The sales staff on this floor are doing all the hard work for some of the top names in suck: Mike Filsaime :: Frank Kern :: Anik Singal :: and Rich Schefren. In return for their hard work they are shafted in the eye with a hot stick. Salesmen are paid minimum wage … plus 10% on sales. For many :: this adds up to poverty level wages. As a special fuck-you cherry on top :: 1% of the 10% commission is withheld. If there are any cancel/refund/charge-backs {aka people coming to their senses} then that commission is deducted from the withheld funds without notification to the salesman of who canceled … when … or why. The withheld commissions are to be paid out six months after you terminate your employment with Dot Con Secrets. And if you believe those payouts happen … then you probably don’t read this kick ass blog.

Recent months have seen ethics deteriorate from “None” to “Holy Fuck You’re Kidding Me.” Some of the “deals” being pushed by the floor are for upwards of $40,000. The remaining sales staff may no longer even get minimum wage in favor of making them 1099 subcontractors {slimy … and a tax code violation}. Like so many stupid badguys before him :: Brunson is making all the worst mistakes right at the end when he has the least amount of loyalty. Dark clouds are coming to feed on you beefcake :: now would be a good time to start drinking beer.

Brunson thought he was safe behind his SEO Maginot Line of fake blogs :: fake profiles :: and fake friends. But :: as always :: he was wrong. Eventually the web {and justice} will kill all the fakes :: and only one robot will answer the query … Russell Brunson?