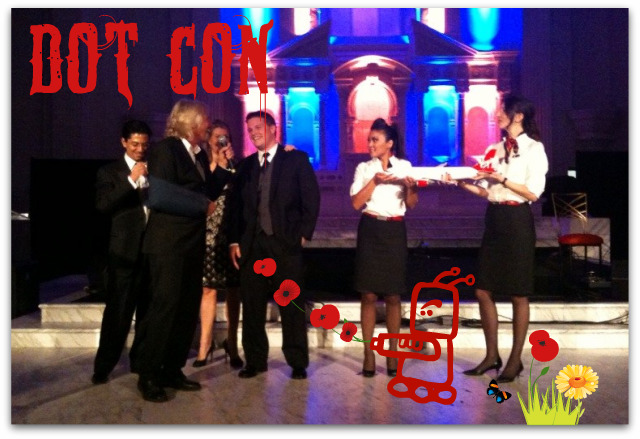 “Russell Brunson is an Internet scammer!” :: Type that shit into Google to find out all the hundreds {maybe thousands} of reasons why it’s not true. Russell might just take home “the gold” for fake review sites :: he’s shown a real commitment to hiring people in the developing world to ruin in the Internet for everyone else {Disclosure: “the gold” in this category is likely not made of actual gold (I’m suggesting defecant to the committee :: for obvious reasons) [WARNING: Triple-parenthetical-nesting is a technique for advanced bloggers only]}.

Bishop Brunson recently attended Sir Richard Branson’s uber-expensive Rocking the Kasbah celebrity fund raising shindig in Los Angles. According to insider reports :: both Charlize Theron and Natalie Imbruglia showed up in :: get this :: DRESSES! Yeah. I know. Unfortunately for children in poverty :: Natalie “got it wrong with a glittery red gown and two-toned haircut.” {link} Exactly! How could she have been any more wrong?

Along with all the wrong dresses :: the festivities included an auction. At the top of the block was the opportunity to name one of the new Virgin America A320 airplanes. Russell Brunson {Internet Scammer!} :: was the winning bidder at $50,000. Shaazam! … and also … **WTF? **Where did this puffy headed mother fucker get that kind of money?

Brunson’s company {which he claims is an eight figure operation} is called DotComSecrets :: making his website dotcomsecrets.com :: which is clearly stupid. If you :: like The Droid :: think that Mike Filsaime is a vicious little garden gnome who needs to get his … then you may already recognize this dotcom.com madness. Mike’s “flagship” site is PayDotCom.com :: Oy Vey!

Mike and Russell have lots of things in common :: They give each other pedicures :: Lovingly touch bald foreheads :: Oh and this …

Gentlemen Please! There could be children reading this {maybe your own!}. Save the bedroom talk for your criminal circle jerk.

Brunson is currently pushing this stinking ball of waste :: MicroContinuity :: in it he explains his super secret method for creating Internet Millions …

… that’s pretty much it. This gem of a program debuted at $2500. A scandalous fucking rip off. Now you can get it “free” on a “free” iPod shuffle :: and then Russell will bill you $97 per month until you die {or pretend to die}.

That scammy crap is bad enough. But it’s NOT really so much what Russell Brunson is about. Russell the Mormon has actual meat space offices in Boise Idaho with a “coaching floor” responsible for making hyper-agressive sales calls. Many of the top “gurus” dump leads into Brunson’s Boiler Room and let his people try and make the conversions. High level sources tell me that in order to stay profitable the feeding frenzy floor requires at least 1000 leads per day.

On a Droid post this past September :: a commenter {who is known to me but not to you} detailed a horribly abusive and disgusting sales call for one of Mike Filsaime’s frauducts. The call came from Brunson’s boiler room :: as many of the calls for Mike’s BullShit have over these past years ::

“Mike’s salespeople have a particularly questionable technique. First they phone you after you order some shitty free stuff from him, then in the course of conversation say something like:

“Lots of the people interested in our programs are in a bunch of debt right now, and been affected badly by the recession… Do you feel you’re struggling with that? What kind of debts do you have?”

(It goes without saying that I lied here, but was interested to see what they were getting at)

They then, under the same premise, enquire innocently about your total credit limit. They continue to ramble on for a while about the great results…satisfied clients…but we’re very busy here…can’t deal with timewasters…lots of clients come for personal coaching…you’re a decision-maker right?…on and on and on.

Then, out of the blue, it transpires that the ‘coaching program’ (which you’ll have heard no actual details of by this point: such as what it coaches you in; who teaches it; how it’s taught; etc) is priced thus:

(Your Credit Limit) minus (Your ‘debts you’re struggling with’) = Price of Filsaime’s coaching!

Yep, to the penny – even by Mike’s standards that’s just fucking magnificent! Mike really does care about the burden of your debts – that’s why he’ll only take every OTHER dollar.

At this point I finally tired of the guy on the phone and said I wasn’t interested. He immediately confronted me with 2 arguments: (1) You said you were starting an online business earlier in the call, and (2) You have enough free cash on your credit card to afford it.”

That’s just pillage. Plain and simple … and it’s how fat bastard Russell Brunson has been making his money during The Great Credit Card Bubble.

Now the bubble is popping :: and The Droid is guessing that Papa Mormon Smurf is in some trouble. Leads are harder and harder to find … and closing has become almost impossible. And then there is that whole thing with The Droid {little ol’ me}. Russell has been sweating me for months now. He likes to boast publicly that I won’t be able to hurt him because he has so many “SEO specialists” at his disposable. Keep on thinkin’ that fat boy :: right up until the point where you are vacuuming what’s left of your life up off the floor. You stupid bitches fight SEO Wars :: The Droid fights War Wars. They’re different. Or to put it in a language that you might understand :: TheyAreDifferentDotCom.com ::

The Priest of Mormon Hypocrisy says he’s taking a step back from Internet Marketing to focus on his farcical dream of being a wrestler! That’s NOT a joke … and this too good to be true YouTube video proves it. Russell Brunson’s unthoughtful emotional tribute to Russell Brunson’s immature dreams …