The Power to Couple 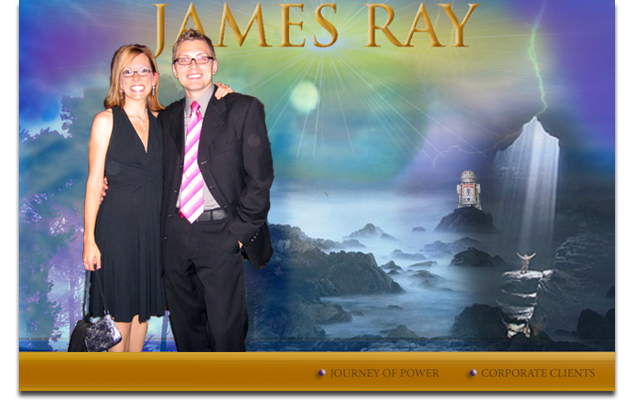 Josh and Megan Fredrickson :: two beautiful humanitarians looking to make the world a better place. Do they sometimes have to cover up a death {or four} to finish the world changing work of the fake lord? Megan: “I, uh, no, I mean maybe, I don’t quite … yeah … okay totally! But just a few small ones. Is it cold in here … or is that just my soullessness?”

Megan and Josh have been with J-Ray since way back in the day. A rumor {just started by me} says that the three of them first hooked up via an awkward CraigsList three-way in a Minneapolis Airport … but J-Fred tells the story like this {pdf of Josh’s November interview with investigators} …

Herbalife is a multi-level marketing company :: aka a pyramid scheme :: aka a waste of time. Like all other MLM’s a key component of their business is having big Ra Ra seminars where they sell their “distributors” on a bunch of expensive bullshit that will help them “grow” their “companies.” Death Ray is on stage being paid to push the MLM’ers into being the best little pyramiders they can be :: Megan and her girlfriend Josh are in the audience … thinking about how they can better improve on their selling of the selling of the selling of the sell.

“Way back in the day he did like a two-hour kind of introductory kind of speech deal and we were really into what he was saying. So at the end he was selling people a two day weekend which is kind of like the next step big introduction to all of his events. And so we signed up for that and we were participants, we attended James’s events and went through his programs and such for about three years through 2004. And at the same time I was also on my own developing websites and that sort of thing. And I started to promote some of James’s products on a website as an affiliate so I would get a kickback if I sold any of his products. And it ended up that I was, my site was sending more traffic to James’s site than his own marking efforts and so James came to me in June of 2004 and asked if I’d do some freelance work for him.”

So Ms. Josh was a Internet Marketer :: an affiliate marketer for a guru whose products he was both buying :: and selling. Paying for access :: and selling access :: the circle of not-life. Look down right now at your private areas :: are you wearing those same pants? Are you? Take those mother fuckers off RIGHT NOW and walk naked through the streets instead. Sure people will laugh at your deficiencies :: but Josh’s pants are full of life ruining infections.

From 2001 to 2004 Megan and Josh took The Journey of Power :: which James Ray International has helpfully illustrated in the shape of a pyramid … 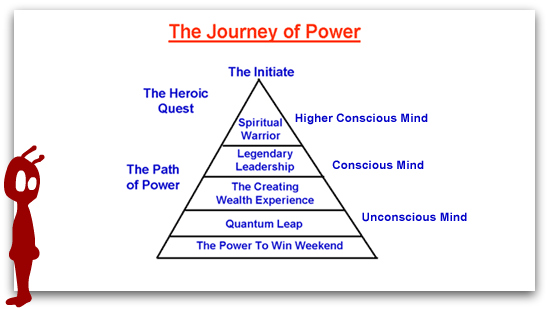 Mania Megan works at Best Buy Corporate {a profit model based on aftermarket warranty scams was probably her stupid idea} in Minneapolis. She’s bringing in all the bacon for Team Fredrickson. In Josh’s fragile little mind James wanted to hire him … but then by miraculous coincidence decided to put his wife in charge of the whole sham outfit.

“Originally he just wanted me and just because it was too hard financially that’s when he started asking about Megan and then it ended up that he really wanted her.”

Sure thing LoverBoy :: keep telling yourself that. But Ray had already known Megan for three years. This is the pre-Oprah days :: followers were harder to come by :: and these seminars are LONG ass LONG. Megan was in one of the first sweat lodges. Death Ray wanted a thumb ring on Megan :: and that’s what he got.

Josh says they took a pay cut to move to California :: and that they were working longer hours. But it was worth it because of all of the vomiting … and people in the fetal position lying face down in the mud mumbling about seeing The Beast … and arrows through people’s eyes … and screaming children … and brain damage … and other super awesome shit like that.

The Power to Win Weekend {later called Harmonic Wealth Weekend} is the entry point to the JRI human sausage grinder. Get the sheeple in for that first seminar weekend :: “only” $997 :: and then use aggressive covert persuasion tactics to sell them the rest of the way up their Heroic Quest to the Higher Conscious Mind of the Warrior Initiate.

But how to get people to stick their heads into the trap :: IM affiliate wunderkind Josh Andrew Fredrickson do you have any bright ideas?

How about a single purpose sales website with a woo woo :: long form :: bullshit sales letter? It’s like the missionary position of Internet Marketing losers worldwide {ThePowerToWin.com circa 2005}. And of course it would anger the IM gods if such a site didn’t have appropriately inappropriate testimonials from incestuous insiders posing as neutrals …

“Upon returning home, all areas of my life have improved dramatically. I have successfully started 3 internet businesses, my business and personal relationships have grown ten-fold, my spirituality has grown to new heights, and I am now engaged to an amazing woman with our dream wedding around the corner.