The Great Pyramid {of Herbalife} 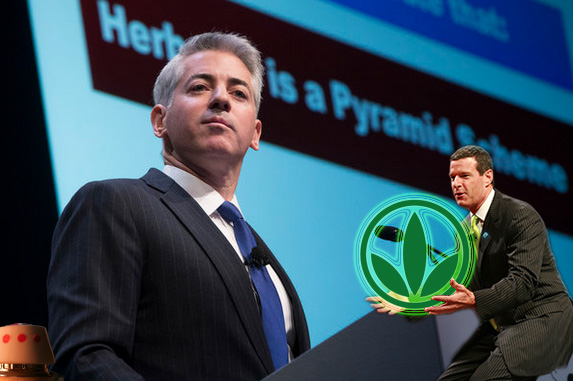 Herbalife is fucked … ask me how!

Don’t ask me how :: cause I was already going to tell you … keep your stupid questions to yourself. 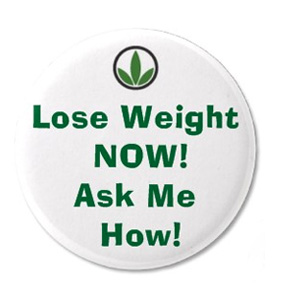 Over the past three decades Los Angeles based {via the Cayman Islands} Herbalife has pretended to sell various products that pretended to promise to make you thin and pure or whatever … like a rainbow. The fake claims used to be bold enough to occasionally irritate the FDA into partial action :: but by now the product claims are more like … “comes in nine flavors including the all new Wild Berry™.”

The products don’t matter :: it’s always been all about selling the sell … and that’s never been truer for Herbalife than it is today. If they were to stop selling the sell :: they would immediately cease existing … which would be more than fine by me. But it might be a little awkward for the New York Stock Exchange which currently {and quite mistakenly} values Herbalife as a $3 billion non-scam company with a bright :: non-imploding … future ahead.

Last year Herbalife CEO Michael Johnson was one of the highest paid CEOs in America :: earning a totally ludicrous $90 million … I guess he must have come up with the idea for Wild Berry™ or something. Compare that to the average Herbalife “employee” :: who earns a multi-thousand dollar loss … and you’ll probably be irritated enough to binge drink like Herbalife founder Mark Hughes used to before he died a horrible hypocrite … and went directly to hell.

Herbalife is a pyramid scheme :: exploiting the many for the benefit of a tiny :: very undeserving … few.

I’ve mentioned it before …

Herbalife is a multi-level marketing company :: aka a pyramid scheme :: aka a waste of time.

That’s why they were both thrilled when they found out about Herbalife :: and how easy it was to pyramid your way to the top of a pyramid just by telling other people who love pyramids just how gosh dang fun pyramiding can be.

The corruption and awful of the Herbalife mega-pyramid trickles down to the rest of Scamworld. All the scammers in scamland benefit greatly from the implied legitimacy of Herbalife trading on the New York Stock Exchange :: from the aggressive actions of their high-priced attorneys :: from their regular appearances on financial television … and from their extensive lobbying efforts. According to OpenSecrets.org :: Herbalife CEO Michael Johnson is a great supporter of Utah’s FOP {friend of pyramids} Senator Orrin Hatch.

Ending Herbalife’s reign of destruction could be a potentially huge victory in the fight against manipulation scams. But in spite of a deep loathing for everything they represent :: and an understanding of their importance within the hierarchy of the sick machine … I know well better than to start a solo war against piles and piles of Wall Street monies.

But last week everything changed.

Fucking everything :: I’m tellin’ ya … everything. Ask me how!

Bill Ackman :: semi-famous hedge fund manager and hero to troublemakers everywhere … gave a three-hour presentation entitled Who wants to be a Millionaire? which argued – scarily conclusively – that Herbalife is an obvious pyramid scheme with no real business model whose stock should be valued at zero.

Ackman and his hedge fund Pershing Square :: along with a gaggle of other seriously rich people who I’ll call “The Shorts” … have made enormous bets {like more than a billion dollars} that Herbalife’s stock is going to tank. Of course … that’s not unusual in the land of milk and money. It’s all handshakes :: polo :: and fancy hats down at the club one day … I’m betting that your company sinks into the mud and reporting you to regulators the next. But what is unusual is making a bold public stand in a way likely to accomplish some genuine public good.

“I’ve never seen anything quite like it,” said Timothy Ramey, an analyst at D.A. Davidson & Co. “I’ve never seen an investor spend 3 1/2 hours of time at a major venue being webcast and then make TV appearances to make his point. It’s the largest orchestrated bull or bear case that I’ve ever seen.”

You can see the presentation in all of its awesome glory at Facts About Herbalife … a data-dump website posted by Pershing Square that they are hilariously publicizing via {you can guess the keywords} AdWords.

“I’m very fortunate to have the means to pursue this,” [Ackman] said. “I am independently wealthy. When I believe in something, I can say what I want and do what is right.”

A decade ago :: Bill Ackman started a big ol’ messy fight with another company that has no real moral right to exist … MBIA. It’s complicated :: but the bullshit bond insurance sold by MBIA was one of the primary culprits in the recent financial crisis … its undeserved triple-A rating used to sell undeserved triple-A ratings to billions of dollars worth of toxic derivative slime. Ackman’s zeal for exposing the problem went way beyond a desire to profit from his short position. He was basically kicking Wall Street’s biggest ever bubble {with its associated big bags of money} square in the nuts.

The Wall Street bubble kicked back :: and by the time MBIA lost its triple-A rating and helped spark the collapse of the credit markets … Ackman had himself been investigated by all of the important enforcers and regulators who pretend to protect the people by protecting the bubbles.

Thanks for nothing Eliot Spitzer … speaking of people going to hell as hypocrites.

You can read all of the :: so surprisingly not boring … details of Ackman’s almost religious crusade against MBIA in Christine Richard’s fascinating book The Confidence Game: How Hedge Fund Manager Bill Ackman Called Wall Street’s Bluff.

Herbalife str8 scams poor people :: that’s it … almost no veil. It’s not complicated like a CDO of CDOs insured by an insurance company that’s leveraged at 140 to 1. 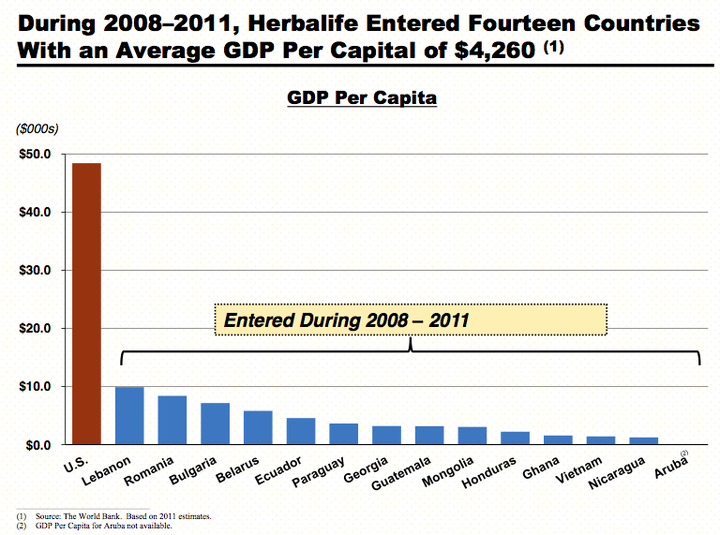 Look at that cat crap :: cashing in on America’s cachet to take money directly from the hands of the world’s poorest … the richest fucking exporting financial fraud to the poorest. Real nice … just what Bizarro Jesus would do.

The assholes most responsible for this unjustifiable moral outrage :: like Michael O. Johnson … should be held accountable in dull prisons for protracted periods … maybe ones that only serve half-cooked {generic brand} oatmeal.

Here’s the best/worst slide from the presentation … 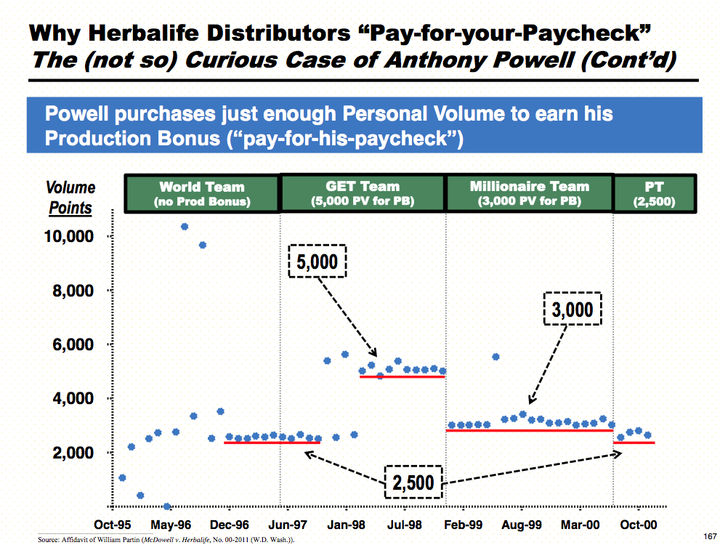 Herbalife distributors must buy thousands of dollars worth of powdered product {at extremely inflated prices} each month if they want to receive their big bonus checks for having recruited others into the misery. A lawsuit between a former high level distributor and the company {please keep suing each other idiots} allowed analysts at Pershing Square to plot the correlation between this particular distributor’s alleged “retail product purchases” :: and the volume at which he was required to purchase the product in order to qualify for his misery bonus {aka his paycheck} at the various levels he’d occupied in the scheme. It’s laugh out loud precise … exactly like real retail sales are not.

If one is going to be paid $6000 for buying $5000 worth of overpriced vanilla latte protein powder :: then one is going to buy $5000 worth of overpriced vanilla latte protein powder … or maybe Wild Berry™ depending on one’s mood. They’re buying the products themselves so they can pretend like there are products to sell when they’re selling the sell to the uninitiated … or when they’re selling their sham business model to their ineffective regulators.

Destroying this or that pyramid scheme is totally doable :: but doing so does very little to slow the rampant proliferation of pyramid schemes in general … my regularly confronted dilemma. But I think this situation presents a very different sort of opportunity …

I wouldn’t have expected to have my optimism for change rekindled by a hedge fund billionaire :: but it just happened … and I’m for sures not complaining.

I’m still on fake robot hiatus while I finish up a couple of other {hopefully kickass} pyramid related quests :: but I’ll be back soonish … and I’m oh so happy to pre-introduce 2013’s SaltyDroid target du jour …