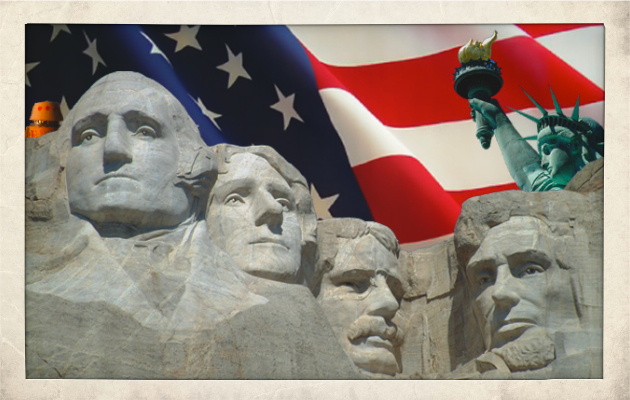 Four score and seven years ago …

… starts a famous speech that I can totally plagiarise because its author and his nut-job wife both died before Mickey Mouse invented copyright tyranny. It ends like this …

Cause free.dom is a struggle :: it can progress or it can decay … but stasis is a non-option. Project America’s government of the people :: by the people :: for the people … has been one of the struggle’s great champions. The “of the people” government offers the best :: and only :: defense against the biggest threat to human free.dom … the fucking government.

We all need the fucking government.

We all need the fucking government to constantly improve.

Broadly speaking {in an appropriately normal tone of voice} :: and specifically speaking here at the FakeRobot ShoutFest™ … we need the fucking government.

So just to be totally clear …

Now that’s out the way …

The FTC has a YouTube page :: it’s pretty adorable and forward thinking for a bunch of old white people living in the great bastion of banality … Washington DC. Come for the traffic … stay for the comic lack of architecture. Washington DC :: a little taste of the Soviet on the Potomac … make your two-hour Beltway commute in a hybrid SUV like Jesus would do for sures.

Anywayz :: the FTC’s animated “make a complaint” video has been added to my complaints page {which you might notice after reading this parenthetical has moved into the top ten posts} … it’s a useful video.

Consumer education is part of the mission of the FTC’s Bureau of Consumer Protection. But they also try to educate the scammers about the rules and regulations which might be applicable to them if they suddenly decided that following the rules was an option …

If they were enforced and followed … the Biz Op :: Internet Marketing :: MLM :: boiler room :: and self-help coaching “industries” … would all be completely eliminated. But they won’t be followed :: they’ll be totally ignored … natch. And enforcement will be random and slapdash :: burning almost none of the guilty … and breeding further contempt for the law in the black hearts of the lawbreakers.

In 2009 the FTC changed the rules about endorsements :: testimonials :: and non-average results reporting …

… it would have eliminated Internet Marketing :: biz op :: self-help coaching :: MLM … and boiler rooms. But instead it did jack shit nothing :: because we need vision and innovation in enforcement … NOT rule making.

“Don’t be a fucking liar liar pants on fire” :: that rule dates to The Stone Age … and it needs enforcement more than ever in The Information Age.

… I watched the whole three hours and took copious notes :: cause I’m gonna win … and winners do boring shit like C-SPAN note-taking.

According to the government :: the government is making “tremendous progress” in the fight against fraud. I guess maybe pulling lol-ridiculous assessments like that out of your ass is one of the upsides of not having taken any objective measurements of your progress. Or maybe it’s an upside of failing to properly define the problem? Or maybe it’s an upside of being ten years behind the times?

The truth is that something much closer to zero progress is being made :: maybe-prolly the inverse of progress … where maybe-prolly = definitely-totally.

The FTC currently has over 1.8 million complaints on record :: kinda sounded like they were bragging about it. Speaker after speaker talked about the importance filing complaints after you’ve been scammed :: and hey … maybe they’ll even do something about it too {nope}.

It’s similar to how we enforce the drug laws against jobless minorities :: once 15,000ish complaints are registered against an individual :: involving not less than $5 million in external damage … the government may decide to open an investigation. Or wait :: no … we have a totally different enforcement plan for the drug war. Cause this is just life ruining fraud against old people … not something scary and dangerous like smoking some weed and going to a jazzfest.

Complaints are a horrible way to determine enforcement priorities. Scam victims don’t understand the scam business :: that’s why they got fucking scammed. Good scammers :: or super mean scammers :: can avoid complaints altogether through the consistent application of already well formulated manipulation patterns. James Arthur Ray was able to hide DEAD BODIES for fuck sake. Many of the most severely wounded victims are the ones who don’t currently understand {or accept} that they’re wounded victims.

So let me help you out for a minute. I’ll pretend like I don’t know that you’re losing on purpose :: and you pretend to listen before going back to pretending to stop the biz ops of the 1980’s.

Nobody works alone … so nobody gets charged {or sued} alone. Along with focusing attention on the core of the problem :: this method breeds internal tensions and paranoia. Get shitheads saying … “you’re going to get me arrested” to each other … and everything will change.

Only bring individual cases after you solve the cartel problem {the main fucking problem} :: or after you find an infinite resources tree {ask The Fed about it … they might think they have one} … or a tie wearing government unicorn that shits golden eggs {fat-free organic!}.

2) Bring cases against the most publicly prominent violators {and don’t forget to make them RICO}.

It’s fun to give cases zippy PR names like Operation Clean Sweep :: or Operation Empty Promises … as a way to try to attract public attention to this serious issue.

Like I mentioned, Jeff Walker made $1 million in 24 hours.

Another guy, Frank Kern, made $23 million in a day using four different promotions.

ALL of them have generated this kind of wealth many times over by just repeating their own formulas for success.

And they’re doing this NOW, despite the poor economy.

Why should anyone at the bottom of the scam land pyramid care about your dumb rules whilst shit like that is happening at the top?

3) Attack anyone who attacks free speech.

Now that you’ve stopped trying to “educate” consumers who will never hear your voice during their critical moments of decision :: and now that you’re done trying to “educate” the scammers who don’t give a shit what you say because they’re criminals … you can help the people who really need your centralized subject matter expertise.

Fraud rackets are hella tricky to understand … but there are big advantages to cracking down on them :: exposing them :: and suing them. Economic damage is the stage upon which most other crimes play out. Decrease fraud … you decrease violence.

Collect and digest complex multi-jurisdictional information :: and then redistribute it back to the smaller nodes in the battle against trust crimes … making the fight easier for everyone.

The badguys in the fake world are totally reliant on the negligence and greed of the morons in the real world. Cut them off from the real world by slapping down their enablers :: who unlike the scammers … may still have something to lose.

I’ll be the $cientologist :: you be the buff black guy …