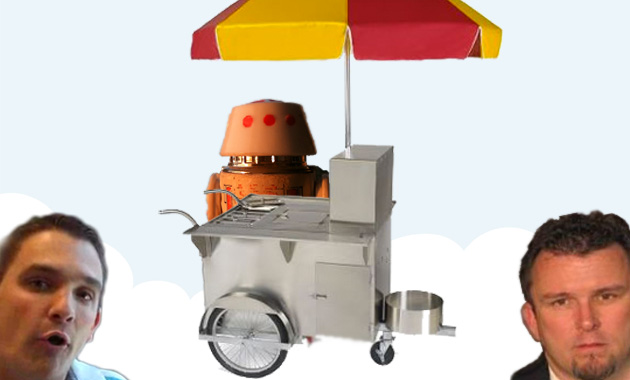 Perry Belcher made millions of dollars online by lying to sick people :: selling them fake medicines … and making criminal coconspirators of his affiliates {before ripping them off}.

Evil Jowls was convicted of felony computer crimes :: lost all his super lame possessions … and was sentenced to ten years of probation with special conditions barring his participation in misleading sales {among other things}.

Fuck that though :: what’s a fat stupid bastard supposed to do … get a real job? No way :: jobs are for people who don’t understand that it’s okay to lie as long as you’re gettin’ yours … cause then later you can trickle down on honest people and stuff. Not pee or anything :: but maybe … let’s see how it goes.

But it wasn’t all fake claims by fake doctors about fake cures for bladder infections which untreated may lead to total kidney failure :: it was also the magic unicorn power of … wait for it …

Who’s got the patience for believing in the children … hot dogs are the fucking future!

Perry “the hot dog guy” Marks {which according to Belcher wasn’t him using a probation violating pseudonym because his middle name is Mark} has twenty years experience in fraud :: er :: um :: I mean hot dogs …

“For the first time ever I’ve decided to share everything that I’ve learned over the last 20 years in the hot dog cart business with you.”

He’s been shoving tubes of dubious meat down his fat lined throat for decades … and you can too!

“…This Is The Easiest Way I Know To Make an Average $576 a Day Without Any Formal Education -or Business Experience Like Me”.

Remember My Motto: Nobody Has EVER Went Broke Selling Hotdogs!”

You can’t went broke on hotdogs :: if’n you don’t believe me … you can ask science.

According to anonymous sources close to the story {ones who have huge fat necks :: felony convictions :: terrible taste in shirts :: a super fake twang :: and a hate filled vendetta against a fictional robot} … ownership of The Legend of HotDogs site was transfered to Ryan Deiss during Perry “the hot dog guy” Marks’ medical fraud related criminal problems.

Naturally :: I signed up to receive all the lastest tips and tricks regarding selling my meat on the streets … great stuff like …

“Jayson claims his fantastic success is due to two things: his proximity to BYU campus, which helped fuel Provo’s hunger for hot dogs, and the superior quality of his products. “We bake all of our buns fresh, and we use bigger and higher quality dogs than our competitors.

So I guess the tip is move to Utah … and don’t serve painful sauce.

I’ll bet your eyes were really opened to how much money you can make with your own hot dog cart.

All that you really need is the information in my course and just a few dollars to get started.

Oh but [sic] the way did you want a cookie for desert [sic], their [sic] only a dollar?

Just these few could instantly double or triple your daily profits and it cost you NOTHING to try.

Tip –> Ask people if they want even more hotdogs :: or a drink … omg success!

Jesus in the morning these are some sweet tips … which is why I have been such a longtime subscriber to The Secret of Hotdogs of Attraction mailing list.

And then this month something changed :: suddenly and without notice …

I’m sending this e-mail out to our entire subscribership of hot dog cart enthusiasts.

Why am I sending this to every single person? Very simple: You’ve all been asking for this for a long time - and I’m finally delivering it. Let me explain.

Over the past handful of months I’ve been getting a lot of feedback about the impact of the “make money” industry. Many of you have shared stories about feeling taken advantage of, misled and generally abused.

While a number of folks are flourishing in your businesses, I’ve connected with a lot of you who are confused, stuck and majorly struggling to build the business you really want. Many of you aren’t even sure you’re in the right business.

By far the biggest question that has come in from the largest number of people is this:

“In today’s economy, what business can I build that will generate the income I need to FINALLY attain true financial fre.edom?”

May the god of hotdogs forgive them for what they’ve done.

Justin has way good business ideas because he’s a multiple figures per time period internets multiple millionaire :: and if you want to talk to him about it you can forget it because over on About Justin he tells us …

Justin has a knack for solving problems and figuring out exactly where companies pain points, often having companies pay him upwards of $60,000 to share his wisdom.

Totally true :: companies are desperate for people with wisdumb and knacks and sentence fragments … they’ll pay upwards of almost anything.

Says the imaginary CompanyMan :: “Please sit down Mr. Christianson and share with us all the important things you learned in high school … oh wait … here’s your $75,000 upfront fee. We’re really impressed here at The Company by the way you’ve been able to grow so many necks at such an early age … leverage … action taker!”

Justin says Jeff and Ken each have 7-figure Internet business :: so they don’t need any help getting leads … but you know this hot dog list transformation opportunity was just too perfect to pass up. It’s not desperate :: it’s visionary … and Ryan Deiss is in all the right syndicates so he must know the what what.

Do you want a bag of chips with that?