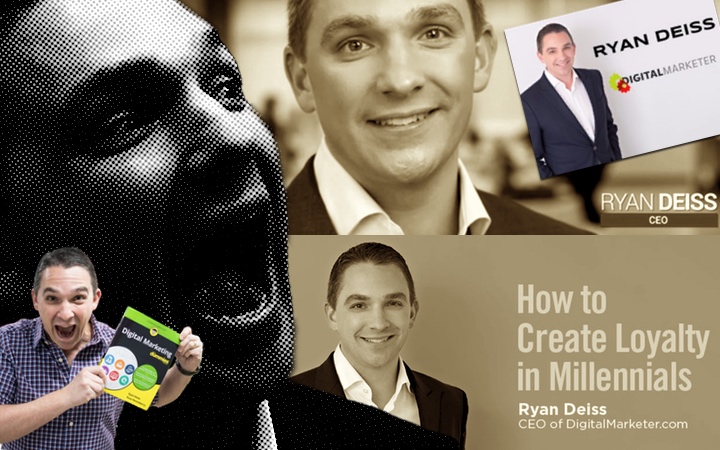 Twitter is infested with sock-puppets, follow spammers, bots and liars; criminals are manipulating meaningless follower numbers into undeserved real world currency and authority. That’s what I was talking about on the day I got banned from Twitter; this was back before you, your mom, and your grandma all created accounts so that three generations of you could tweet at @Comcast support and follow @Oprah.

It was a shit day that completely melted my techno-utopian view of the internet. Fraudsters weren’t ruining the internet, the internet was dependent on the fraudsters. The network hated me as much as the scammers did.

Perry Belcher was on parole for felony computer crimes and had used a spam Twitter account to follow more than 100,000 accounts. His follower list was packed with bots, fakes, and scam victims herded into a Twitter corner. It was an almost worthless list but Belcher was claiming that it was making him rich. The day he and his partner, Ryan Deiss, got me banned from Twitter, Perry and Ryan were Syndicate launching a $2000 product purporting to explain how everyone could get rich spamming and scamming on Twitter.

I hilariously disrupted that launch; but Twitter sided with the scammers, deleting several of my accounts consecutively to make it perfectly clear that I was unwelcome on their platform. Within a year I’d be completely eliminated from the corporate internet, forever thereafter dependent on hacker babysitters just to keep the site breathing.

I wrote dozens more articles about Deiss and Belcher’s sprawling empire of internet suck, and I spectacularly exposed the unambiguous conspiracy at the heart of their people grinding machine. I eventually joked Belcher into a negotiated settlement that had him deleting his fake ass Twitter account and fading from the front of his operation… but it was all a farce that changed nothing.

It’s been an internet eternity since I turned my back and slow-walked from Perry and Ryan’s hot dog garbage fire. As soon as I remove my boot from the neck of a zombie it wanders off looking for the next vulnerable brain to eat. When I walk away from a scene everything resets as though I never existed. I’ve got to do better, but I don’t know how… I guess I’m a lawyer now.

Last month my law practice got a message from Ardor SEO:

Cool. Sure. I’d love to help. Should I read this email or just head straight out there and start helping?

We’re working with Ryan Deiss on some reputation management. If you Google Ryan’s name, you’ll see that someone has written a terrible, unjust article, that we are trying to push down onto the 2nd page of Google 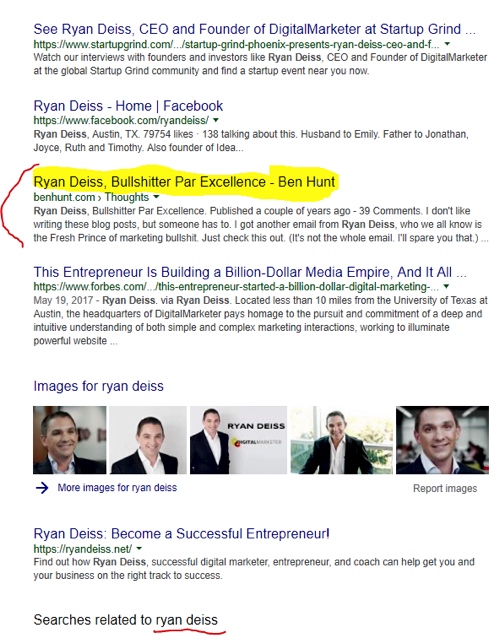 They’re trying to suppress an article by Ben Hunt:

And they’re under the misimpression that I’m Retire@21 dot com. 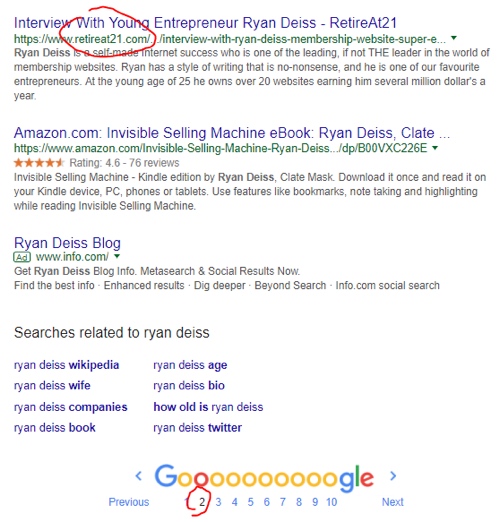 I wasn’t quite ready to Retire@21 myself but I do have my own youth mentoring site where I share from my experiences: Go2College@21 (after serving in the military and discovering just how many types of assholes will be bossing you around if you don’t go to college) dot com.

Would you mind if we send you some on-page optimization analysis to make sure that you’re always on page 1 ahead of this bad result? It would be a great help to us and to Ryan. Plus you’ll rank better and get more traffic.

Thanks so much for your help!

No, thanks so much for your help coolest guy.

Ben Hunt, the blogger that captain cool guy is complaining about here, reached out to me back in 2015 when one of his posts was ranking well for Frank Kern’s name.

I think I remember Frank taking care of that situation with his usual semi-threatening semi-chill full-flattery schtick; it works on basically everyone. The critical post came down.

Then last year Ben reached out when pickup artist David DeAngelo (aka Internet Marketer Eben Pagan) was threatening to sue him over an old post:

Here’s some of that threatening gobshite (pulled from a wall of posturing self-importance).

I also spoke with a with a couple of specialist attorneys in London, and I had them look through it with me.

I request that you immediately:

1) Take down all pages on your websites, posts, or other communications that mention my name.
2) Remove all mentions of my name from every website, post, social media account, email - everywhere.

I calculate that the damage done to me from you slandering me is going to reach up into the multiple six figures, and possibly beyond the seven figure mark.

Pagan followed up by having lawyers from Ack Media Law in London threaten Ben. The critical post came down.

Ben’s Ryan Deiss post will likely come down too, because the zero revenue that critical posts generate are not worth the endless expensive grief associated with ranking for the name of a bad guy.

When you Google Ryan’s name you get:

The Forbes article is as bullshit as its headline:

This Entrepreneur Is Building a Billion-Dollar Media Empire, And It All Started From His Dorm Room.

It’s corroborated by a totally genuine piece of not-paid-media in the Huffington Post:

Ryan Deiss - 3 Reasons Why College is (still) a Lie.

You’re not going to get that multiple ten figure lifestyle from college bros… learn to spam and live like a Trump!

In spite of our interlocked destinies - and my dozen definitive articles on the subject - Google doesn’t return a SaltyDroid result for “Ryan Deiss” until page four. That article’s headline is characteristic of my alter ego; subtle, respectful, and always professional (see if you can spot the hidden meaning):

The internet presents you with a fake picture of the present while eliminating or suppressing critical presentations of the past. It’s not just fake news; it’s a fake reality, a fake history, and it’s facilitating some super scary shit.

I might have no choice but to hire Perry Belcher to get me elected president; make the internet great again.