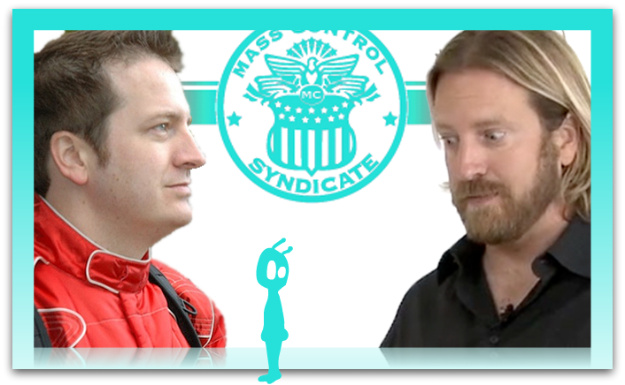 That’s what they call themselves. The Syndicate. Like if they built a fucking tree house {which they probably did} :: then they used a wood burner to carve that name over the extra wide door. The Syndicate. “Look Mom we named our club! It’s a name and a description … we’re super smart like that.”

The Syndicate is a cartel at the center of the get rich quick world of Internet Marketing. Each of the members tries to pass himself off as a freewheeling entrepreneur. An individual rising above :: a rogue :: fighting back against the workaday ways of our corpo-centric suburbanized society. Each sells a version of this easy freedom in a bottle to seekers … the sadder the seeker … the better. But the dream :: like the cake :: is a lie. Success in “the industry” correlates not with value :: individuality :: or effort … but with proximity to a toxic core whose basic operations constitute a serious felony and moral failing.

The Syndicate keeps prices high :: and dissent low. The Syndicate all but eliminates marketplace competition. Individuals or businesses inside of Internet Marketing who act against the interests of The Syndicate risk their financial futures. The Syndicate uses tough :: tasteless :: and intimidating tactics to defend against what it sees as threats to its unrightful domain. Many know about The Syndicate but are afraid to speak for fear of reprisals. Most do not know … but are never the less deeply affected by the cultural tone set by the group.

The Droid has known about The Syndicate for more than a year. Readers who have found my targeting system perplexing can now bask in the sweet light of understanding. Most of my actions have been in some way calculated to damage and/or undermine the cohesion and effectiveness of this nasty little club of cheater cheater pumpkin eaters. And while publicly exposing :: and naming the names :: of individuals involved in a secret crime is a tricky and risky business {even for a badass robot} … I have long been sowing the seeds of social disturbance in private.

The delay in printing the story was about caution :: detail accumulation and verification :: and various still secret strategies. But mostly it was about me knowing that you wouldn’t believe me. I’m just a success hater on a witch hunt … blah blah blah. I needed someone reputable who had first hand knowledge to go on the record :: rather than my normal accumulation of publicly available evidence. There haven’t been any takers for my “Hey :: why not shoot yourself in the face?” offer.

Meanwhile :: The Syndicate knows I know … because I told them. Lots of times :: and in lots of fun {for me!} and spunky ways. They likely don’t understand the full gravity of the situation … but sleep has been lost … and many a plan has been changed. Perhaps it was this unsettling fear of my knowledge … and the growing sense of mutiny {which I have been seeding!} … that led Frank Kern to make a horrible mistake … or maybe his narcissism has fully consumed his intelligence. I don’t know :: but whatever the cause :: Frank Kern and The Syndicate fucked up massively.

Here :: from the last “module” of List Control :: is Frank Kern’s own description of The Syndicate. It’s inexplicably packaged as advice you should apply to your own business! If you know anything about antitrust law … your jaw is about to hit the fucking floor. And if you don’t know anything about antitrust law … don’t worry … cause after the video I’m gonna splain it to ya.

Thanks Irwin Frank Kern :: that really made my job a hell of a lot easier.

“Every contract, combination in the form of trust or otherwise, or conspiracy, in restraint of trade or commerce among the several States, or with foreign nations, is declared to be illegal. Every person who shall make any contract or engage in any combination or conspiracy hereby declared to be illegal shall be deemed guilty of a felony, and, on conviction thereof, shall be punished by fine not exceeding $100,000,000 if a corporation, or, if any other person, $1,000,000, or by imprisonment not exceeding 10 years, or by both said punishments, in the discretion of the court.”

Many cool kids think this statute is shit because it could be read to include almost anything. But for more than a hundred years these cool kids have been ignored … as amendments to The Act tended to make it even more powerful. The statute has civil provisions which enables individuals {like harmed consumers} to sue with the possibility of triple damages and attorney’s fees. Additionally :: each State has its own laws broadly prohibiting anti-competitive behavior … and the FTC has special enforcement and rule making powers.

Capitalism CANNOT tolerate non-competition :: and the consequences are correspondingly severe.

Frank’s explanation of The Syndicate is a textbook description of anti-competitive behavior! Set up a meeting in a hotel room with your main competitors and think of ways you can help each other make more money? Why in fucks name would you say that into a camera?

At one point in his confession Frank says you shouldn’t use your little anti-competitive club for things like price fixing or market division. Cause that would be wrong. And he’s right about that … you shouldn’t do those things. Those are considered “per se” violations of the law … and it makes the plaintiff or government’s case a breeze.

Another way to divide a market is over time … like making sure your product launches and advertising messages don’t overlap … something Frank says you should be doing. The Syndicate keeps a “launch calendar” :: it’s made out well in advance at one of their many meetings. Each member launches a product over an unnaturally short period … keeping supply artificially low. Other members agree not to compete during that time … and to heavily cross promote regardless of the quality of the product. 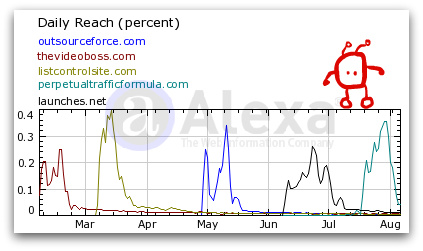 These are the traffic spikes from the launches of five recent Syndicate frauducts. Andy Jenkins :: Frank Kern :: John Reese :: Jeff Walker :: and Ryan Deiss. This same precise pattern can be traced back to 2005{ish} … no competition allowed!

But what about price fixing? She’s the mother of all bad things. If you’re price fixing … you’re fucked! Period. Even if you only control a small part of a small market … if you get caught agreeing with your competitors to keep prices high … you’re fucked. Out one side of his stupid mouth Frank says “don’t do anything crazy like fix prices” … out the other stupid side he says the whole point of The Syndicate is making lots of money over a short period … and being able to charge “premium” prices.

Unfortunately for Frank and the rest of The Syndicate d-bags … no matter what they may say … the price fixing is so blatantly obvious as to be laughable. If you’ve been around this blog for more than a couple of weeks you already know the current price point … $2000.

Mike Filsaime is next up on The Syndicate launch calendar. Here’s a bit from a recent email he sent out promoting his launch to potential JV’s …

“It will follow the launch style, price point, and course delivery of:

All of the launches had the same thing in commons.

TOP LEVEL need. Easy message. Similar price Point, and a need for the marketer to know the information etc.”

First :: that’s not English … it must be a rough translation from garbled Gnome.

But this situation isn’t just about violations of law. It’s a moral and ethical betrayal of the highest order. The Syndicate :: the “A-Team” :: makes ALL the money. The affiliates :: the “B-Team” {also the primary customers} are led to believe that they too can walk a path to easy riches … but the members of the A-Team know that members of the B-Team only exist to amplify the hype … and to open up their wallets to pay extremely high prices for goods of little to no value.

PS - There are no ladies in The Syndicate.