From Utah to Texas With Love 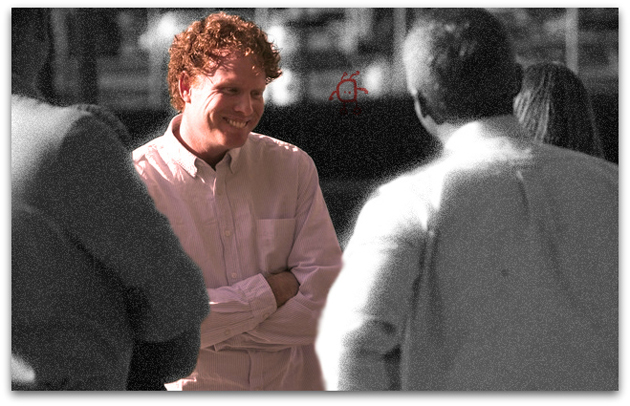 The Red Menace is back out on the mean streets of Salt Lake City :: watch out for him if you happen to be on …

… or any of the other streets named for what one guesses is a temple.

After three months in the clink :: the family of Jeremy Johnson has miraculously posted $2.8 million in bail so that St. George’s favorite fuckstar can get back to managing the collapse of his empire of slime from the comfort of the homes and cars and people that he purchased with money he stole from poor folk.

Photo above courtesy of Rick Egan at The Salt Lake Tribune not complaining about me using his photos without permission. I’d take my own pictures but I suspect I might not be welcomed into Zion by Utah’s corrupt as shit Attorney General.

“We’re excited about going to trial,” Crane said. “Jeremy has run a legitimate business, and we look forward to our day in court.”

Well that’s a strange thing to be excited about. Maybe court appointed attorney Nathan Crane is just happy to still be on the case after Jeremy Johnson toyed with the idea of firing him in favor of self-representation during a “let me out of jail right this second I’m a princess” hissy fit he had last month. That hilarious story ran in the Gannett owned St. George local The Spectrum :: but after a week of being one of the top stories on their website … they deleted it seemingly without comment.

“U.S. Justice Department trial attorney Brent Ward has said he expects a new indictment that will add more charges to the case against Johnson …”

Hooray!! More things for JJ to be excited abouts!! Free party hats for everyone :: you just give us your credit card infos to pay for the shipping …

The $350 million scam that is the basis of the FTC v. JJ lawsuit is not even close to the worst of JJ’s fucking over poor people crimes {see eg Scamming Two Debbies for a taste of Johnsons’s “legitimate business ideas”}. Rather amazingly :: the $350 million stems just from the “forced continuity” part of the scam.

Partner of convicted computer crimes felon Perry Belcher :: member of The Syndicate :: fake Christian :: and all around asshole :: Ryan Diess used to call his how-to continuity frauduct {The Continuity Blueprint} his “flagship” program. But he’s since moved on to not-better things.

In July :: after a surprise appearance by Syndicate B-teamer :: and fucking idiot :: Maria Andros in The Business Insider :: I said this …

Jeremy Johnson’s “Obama Grants Program” web scam did $350 million in consumer damage in just five years according to the FTC. Let’s all hold our breath :: plug our noses :: and guess where he tapped into that kind of traffic volume. Scammers don’t have traffic :: they buy it … and there are plenty of sellers currently pretending to be legit players because transparency is still a mirage … just like the web publishing business model.

Apropos of above said :: The Salt Lake Tribune served me this ad while I was reading all about Jeremy Johnson’s ankle bracelet release … 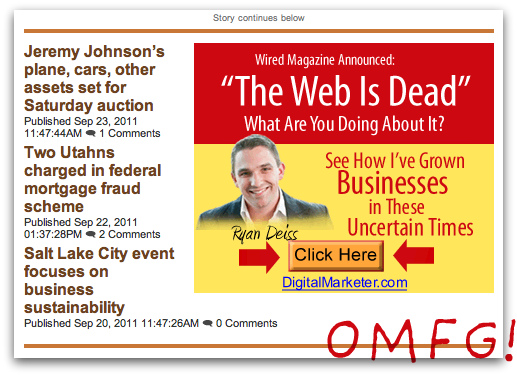 … the circle of {scam} life … and motherfucking irony.