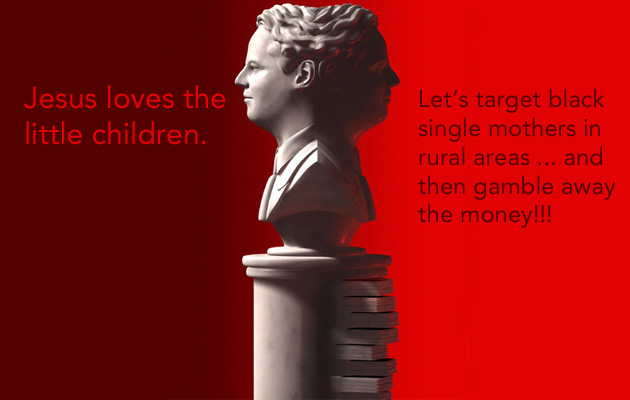 Jeremy Johnson :: The Christ-like Ginger King of the Mormon Mafia … in The New York Times.

In Utah, a Local Hero Accused

Seems like a pretty fucking annoying headline :: because JJ is so obviously not a hero … but he was in fact a local hero. It says something scary dangerous about the particular local.

Here’s Utah’s sitting Attorney General at the time :: Mark Shurtleff … accepting the Best of State Humanitarian Award in the stead of “his friend” Jeremy Johnson. 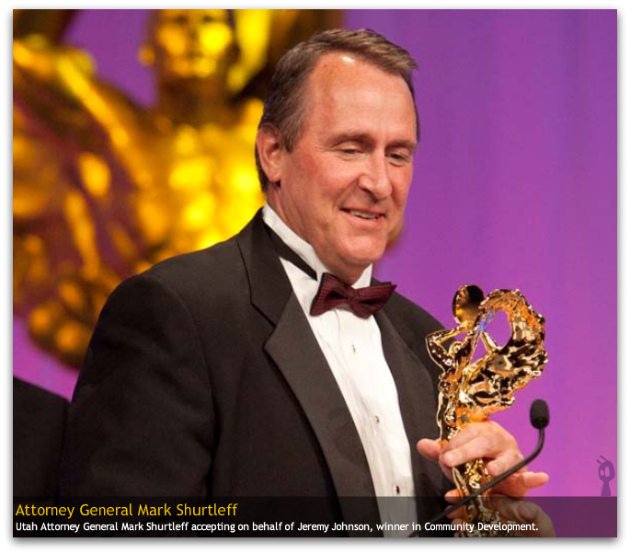 But this is just dumb …

Mr. Johnson, 34 at the time, had never traveled to Haiti before. But his decision to stage a private airlift, using his own aircraft, did not surprise his friends and family. They were used to his impulsive acts of magnanimity.

One local resident who befriended Mr. Johnson when they were both Boy Scouts described him as “one of the most Christ-like people I have ever come to know.”

He’s talking about Christ’s other brother Darryl Christ … who {funny story} was actually one of the money changers in the temple that day when JC went all hippie-messiah-postal on their asses.

Why can’t I get any Mormon readers? This is salt-of-the-earth shit right here.

“Now the F.T.C.’s allegations of fraud have some Utahans wondering whether Mr. Johnson financed his endeavors with ill-gotten gains.”

Any Utahans still “wondering” :: should have their temple recommends revoked … boom! … Mormon slam!

“The F.T.C.’s pursuit of Mr. Johnson is part of a larger law-enforcement crusade to rid online marketing of malefactors. Over the last few years, the agency has shut down a number of online operators who marketed free trials and then charged sizable recurring fees.”

aka … they have done NOTHING! You can’t plug a black hole with low-sodium peanuts. The FTC hasn’t even slowed 90’s huckster Kevin Trudeau yet :: after more than a decade of supposed trying … we’re doomed if they’re the whole of what we’ve got.

The government’s account of Jeremy Johnson follows a similar narrative, albeit updated for the online era, wherein a congenial schemer and his loyal crew, operating on the wild frontier of e-commerce, manage for a time to elude the Internet sheriffs.

There are “Internet sheriffs?” No shit? Can I get their phone numbers? Because I was pretty certain that it was just bumbling-clueless-bureaucrats :: without proper jurisdictional authority … all the way down.

Georgetown law professor David Vladeck :: former director of the FTC’s Bureau of Consumer Protection … who worked on the Johnson case …

“There is a Robin Hood aspect to Jeremy’s behavior,” said Professor Vladeck, the former F.T.C. official — the difference being that Mr. Johnson, he asserted, defrauded needy consumers to give to the needy.

“I would hate to think there is someone bigger than Jeremy out there that we missed,” said Professor Vladeck, the former F.T.C. official. “In this field, Jeremy is a whale.”

Jeremy is “a whale” only if by “this field” you mean … not understanding what’s happening on the Internet.

The point is this :: dozens and dozens of spoiled stupid rich kids from Utah are minting HUNDREDS OF FUCKING MILLIONS … because of an overt conspiracy that involves government corruption to the highest levels. Any non-conspiracy prosecution is a drop in the muddy bucket :: and a waste of breath. Sorta seems like just the sort of thing The New York Times would be interested in :: but I guess not.