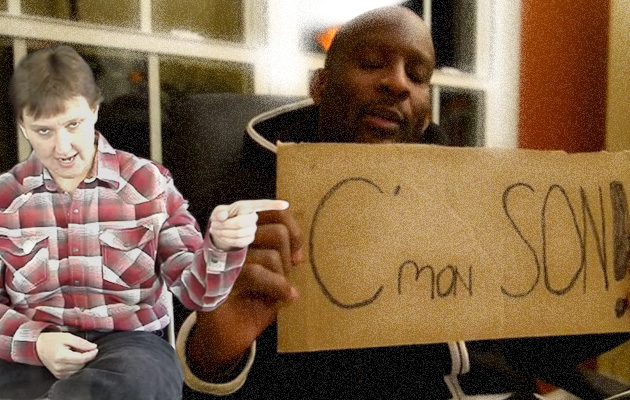 Once upon a troubled time :: The Syndicate threatened to sue the fake robot in multiple jurisdictions {although not to my face … natch} … in order overwhelm my ability fight. I wish they would have :: because it would have made me instant famous … and my desire to fight is an infinite loop. But they didn’t … because bitches ain’t shit.

My main man Crystal L. Cox {love and light} OTOH :: had the man balls to actually sort-of-but-not-really do it … like she said here in the SaltyDroid comments while having an obsessive spastic public break down which she was sure constituted legit service of process …

Just FYI, you don’t have to give me magazines to tell my Gender. I have DDD breasts and a 10 inch Cock. So I am kind of both, a HERMAPHRODITE. a Bat Shit Crazy, Tinfoil Hat wearing HERMAPHRODITE.

She sort-of-but-not-really sued me :: and much of InternetSanta’s nice list … in enough jurisdictions that counting them up for the sake of accuracy would be too tedious … let’s call it 7+ish.

So far :: I’m fucking undefeated … with Cox’s insanity-inanity complaint tossed again and again and again … without necessitating so much as a boiler plate in response. Here’s Judge Matthew F. Kennelly from the Northern District of Illinois …

Inclusion of these disparate claims against disparate defendants in a single lawsuit renders the suit legally frivolous. Cf. George v. Smith, 507 F.3d 605 (7th Cir. 2007). Among other problems, there is no plausible basis for suing most (and perhaps all) of the defamation defendants in Illinois, and the allegations that all of the defendants – who include, for example, the World Intellectual Property Organization, Forbes, the New York Times, a federal judge, an Oregon sheriff, and several lawyers and law firms – conspired with each other are fantastical and implausible.

To which I would argue :: “Objection … effing ridiculous!”

In Nevada :: where the Trillion Dollar Trial of the Millennium complaint was first _faux _filed as a response to a suit brought against her by free speech attorney Marc Randazza … Cox has had her ass handed to her 10+ish times … and has lost her electronic filing privileges.

This from her “Motion for Misc Relief In Propria Persona” …

Sorry for making fun of you persona non grata :: but I took an oath to uphold the Constitution … so I’m legally compelled to mock you. I know there is absolutely no logic or factual basis for that argument :: so I’m hoping it will resonate with you.

I, Plaintiff Crystal L. Cox do not want my pleadings, motions, filings to simply be dismissed and stricken after my time, money energy and rights of due process were exercised, such as my complaint answers and counter complaint in which was dismissed.

You can read the legal ass handings on Pink Truth author Tracy Coenen’s accounting site :: Sequence Inc … one of the many other websites sort-of-but-not-really sued by puffy ferret brained ignoramus Crystal L. Cox {love and light on Knowledge and Belief}.

Which is just exactly where CoxPorn sees a conspiracy in the fractals :: says she on 7+ish of her stupid SEO spam websites …

“Judge Matthew F. Kennelly of Illinois is protecting Tracy Coenen and Jason Jones of Salty Droid. And the interests and agenda of Marc J. Randazza of Randazza Legal Group…

But did I miss a longtime friend of the fake robot blog getting sued for online dissent? 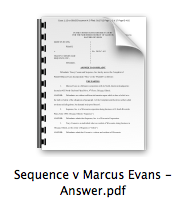 … and on my watch {and in my fucking town} and everything :: bad robot!

Crystal Cox ALLEGES a conspiracy where the court is simply a puppet of Marc Randazza and her other “enemies” {“enemies” in that they’ve disagreed with her at least once} :: but an examination of the record shows something else entirely. Tracy Coenen got pestered sued by Marcus Evans for voicing some {very mild by my standards} concern about how the company was operating :: and those posts have been removed from the web in an apparent victory for bullshit injustice … making the court a very poor puppet indeed.

The posts that Marcus Evans wanted taken down :: were submitted to the court by Marcus Evans as part of the case against Tracy Coenen … click the links to read them on my site {where they will now be archived forever}. In the first post Tracy describes a couple of cold calls she received from a Marcus Evans salesperson …

“A week later I got the same call, this time form a man at Marcus Evans, with a nearly identical script. This time, the seller was offering me this “opportunity” because someone had put down a $10,000 deposit and backed out of the event… Meaning that I could reserve a spot not for $49,500, but for the low low price of $39,500. Lucky me!”

Wow :: $40K … that sounds totes reasonable. And it’s really “cool” how this “low price” “opportunity” was made possible by someone else getting screwed out of $10K :: I have no idea what Marcus Evans is supposed to be … but I fucking hate them already.

“Last week I wrote about a company called Marcus Evans, who got my attention by using dishonest sales tactics and scripted phone calls. That wouldn’t have been unusual or noteworthy, except when I Googled “Marcus Evans complaints,” “Marcus Evans scams,” and “Marcus Evans fraud,” I found tons of websites that were clearly set up by the company to dominate the search engine rankings for those terms.

I can’t confirm what Tracy saw when she searched for “Marcus Evans fraud” that day in 2011 :: but when I do the same search now in an incognito browser … the top five results are all Marcus Evans sites. It’s enough :: all by its lonesome … to make me highly suspicious that Marcus Evans is up to no damn good. Added to highly speech-repressive threats like this one :: and I find my fake robot self all but fucking certain …

In a further effort to resolve this matter amicably, [Marcus Evans Inc.] will agree not to file suit against you and Sequence if you will agree to the following terms:

(1) immediately cease and desist from all comments about and reference to [Marcus Evans Inc.] in your subsequent posting and other communications; and

Gosh how “amicable” :: all she needs do is surrender her most fundamental of fundamental human rights.

The Streisand Effect :: by which any attempt to repress information ends up counter-intuitively ensuring that the same information is passed far and wide by the Internet … is a totally fake Information Age Chupacabra. Sure :: if Barbara Streisand tries to repress someone’s speech … she’ll end up doing the opposite. But that’s because she’s rich and famous :: and that’s all our click-whore celebrity obsessed media really cares about … normal people writing about important {but not famous things} are no better off now than they ever have been.

The Marcus Evans Effect™ :: whereby companies use SEO tricks and threats of litigation to clear the web of dissenting opinions about something as NOT FUCKING PROTECTED as their commercial speech … is the norm - not the exception. The web is one of the most powerful tools ever created for the powerful to repress and bamboozle the weak and credulous. The fight for free speech on the web hasn’t even started yet … {no} thanks Julian Assange.

It’s within that sad sad environment :: where only the {at least slightly} crazed can hope to survive … that I’ve once again offered my assistance to Crystal L. Cox. I’ve proposed {after involuntarily calling her DumbDumb} that Ms. Cox focus her {not insubstantial} :: call it moxy? … against only those parties who are already engaged in a dubious attempt to manipulate the search engines … cover-up style.

To help her get started undoing The Marcus Evans Effect™ :: I’ve suggested Dan Kennedy style Internet Marketer {now with 100% more karate!} Lloyd Irvin … who would like to confuse the webz regarding his involvement in more than one deplorable rape type situation. If Ms. Cox is anything other than a totally insane fucking hypocrite :: then she’ll know just what to do … it’s never too late to join the good guys.