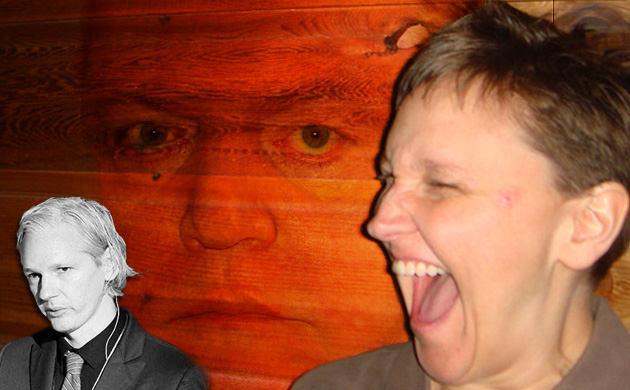 “You have no idea what you’re getting yourself into …”

… said some peeps from Crystal Cox’s past and present after I slapped her a couple times across her puffy dumb dumb face.

Whatevers :: says me :: you peeps got no idea what I’m already into … this one is nothing to me.

Crystal Cox’s freaknuts bullshit predates the Internet :: just ask anyone who has ever come within sniffing distance of her grandma pants. She’s mean :: and cruel … and in a surprise to no one who’s read a single one of her so-called sentences … totally fucking random.

The real The Crystal Cox Story is about local law enforcement’s repeated failure to stop someone who obviously needed to be stopped. But hundreds of ignorant stories by journalists :: bloggers :: and television halfwits … framed the story in undeserved 1st Amendment draperies.

You can count on one hand the number of people who wrote good stories about how extorting productive citizens shouldn’t really count as journalism. No one {my own self included} wanted to go deep enough to tell the full story of Cox’s destructive rampage.

For one :: if you’re not me … she’s guaranteed to lash out at you like an angry baboon riding an angry boar to the library’s free internets. For two :: even if you are me … you don’t really care about her because she’s a tiny fish {with a broken fish brain} in a big sea of evil sharks. Ain’t gonna win no Peabody for taking down one random psycho.

But alas :: she’s totally begging for it … and as per the usual … lawyers are making the situation much worse … so back we are to Crystal’s Cox.

Says The Cox on the header of her latest no hits hit webpage JenniferRandazza.com …

She thinks :: you know maybe not … but fuck it … it’s Spike Lee style journalism … any old address … get a mob and I’ll meet you there.

Jennifer’s married to Marc :: Marc didn’t want to take Crystal’s stupid case because it was stupid … ergo … Jennifer’s totally got it coming. She’s lucky she only has one deranged cyberstalker after doing something as dubious as marrying Marc {prolly for his big 1st Amendment lawyer monies}.

Worse still :: Jennifer and Marc Randazza have done some :: Dangerous TO the LibertieS of Fundmental 1031 BankrupPts :: breeding … forcing Crystal Cox Investigative Cyber Extortionist to do what any hero of free speech would do … register a website in the name of their three-year old daughter :: who can be seen here now forced into pigtail-incognito.

Wow … that is some “coxed up”™ shit right there. But it’s all for a purpose as Cox explained using something like English … 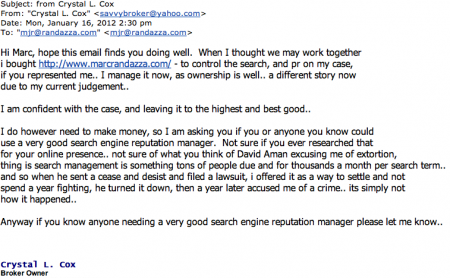 “I do however need to make money, so I am asking if you or anyone you know could use a very good search engine reputation manager. Not sure if you ever researched that for your online presence.. not sure of what you think of David Aman excusing me of extortion, thing is search management is something tons of people due and for thousands a month per search term..”

Thing is :: Crystal Dipshit is right about that. The Internet is currently being used for extortion on a grand scale … and nobody gives a shit because everybody’s too busy arguing about the social issues of the 1950’s.

Here’s Crystal Cox’s trademarked version of creating a problem only she can solve :: posted as a pdf on Popehat … it’s about sluts and alcohol babies and oh my god.

The definition of “medium of communication” was left deliberately broad by the Oregon legislature: “‘Medium of communication’ is broadly defined as including, but not limited to, any newspaper, magazine or other periodical, book, pamphlet, news service, wire service, news or feature syndicate, broadcast station or network, or cable television system.”

{yawns rudely} Great amicus curiae brief there fellas :: maybe now you could write a cyber-memo addressing the whole “who could possibly give a shit?” situation.

Crystal Cox now has formidable attorneys on her side — Eugene Volokh and the Electronic Frontier Foundation, who just lost a motion for a new trial and are now appealing the judgment against Cox to the Ninth Circuit. Though Crystal Cox is a vile, evil person, I have nothing but respect for Volokh (a Popehat favorite) and the EFF.

“Nothing but respect” does not describe my feelings about defending criminal-non-speech as speech … running a big risk of setting horrible precedent on the worst set of imaginable facts. It looks like str8 up media whoring to me :: against the interests of the all important 1st Amendment … and I don’t see how that can be respected.

This case was easily distinguishable from all future cases by virtue of being a pro se district court decision on a lunatic fact pattern. That doesn’t even count as precedent! Now Judge Hernandez has been forced to write a second ruling in answer to the lamestream media and the lawyers they attracted like moths to a toxic flame. The new ruling is still bad because the facts are still bad … but now its badness is slightly more serious. An appeal to the Ninth Circuit :: which is almost as random as Crystal Cox … could end in a horror show precedent.

What the fuck? This is how we’re going to fight for the first ever chance at honest to god free speech? By getting our lawyer panties in a bunch for the likes of Crystal Cox?

There’s a legal cliché about free speech not extending to shouting fire in crowded theatre … it also doesn’t extend to telling the theatre owner that if she doesn’t pay you $2500 per month you’re going to shout fire during every weekend showing of Hunger Games. That’s crime not speech … it needs to be stopped not protected.

The fight for free speech on the Internet is going to be about perception … not precedent. Most people are silenced by the threat of expensive litigation before anybody starts cracking the goddamn precedent … because the perception battle is being badly lost. It’s the temperature of the chilling effect that will determine how much of the new people power will be boot stomped back underground … and how much will survive to change the world.

The civil rights fight was all about picking the right plaintiffs … good people just trying to get about their normal lives. Historically the fight for free speech hasn’t been so classy :: you didn’t get to pick your plaintiffs … so most of them ended up being Larry Flynt. Protecting garbage speech … to protect the most important principle.

But great news … that’s completely changed! The decentralization of the media function means there is now gobs and gobs of important normal person speech being repressed by the forces of darkness and cowardice. People whose voices :: actions :: and intentions are well worth fighting for. People whose words are harbingers of big social wrongs in need of righting. Fighting for speech that’s worth fighting for … it’s like killing two pigs with one bird.

Crystal Cox and Julian Assange and Larry Flynt … are all right out.