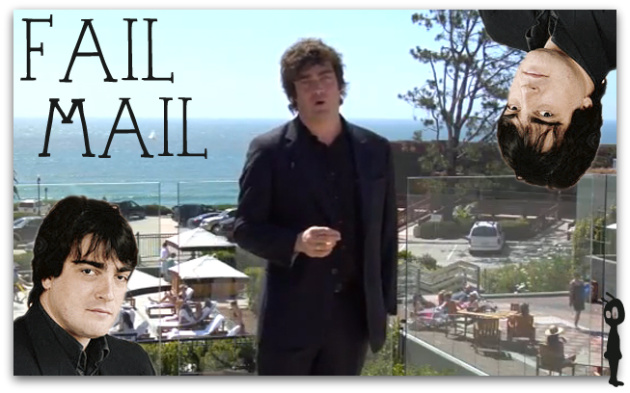 Fee-fi-fo-fum,
I smell the blood of an Englishman,
Be he alive, or be he dead
I’ll grind his bones to make my bread.

Oh children’s poetry :: how horrifying you are! Bones to bread? He’s already a fucking giant … isn’t that scary enough?

Anywayz :: at long last :: an Englishman. This one’s for you Steven Gerrard {call me!} …

Chris Cardell :: whose look is a mix of teen vampire goth and cold potato soup :: has a small penis. No I mean a small problem … not a small penis. That just slipped out … the thing about the small penis. “Small problem” is definitely what I meant to say … but then I accidentally said small penis instead … but I really don’t know for sure about his small penis so I wouldn’t want to say … I mean it’s probably quite small … but I haven’t seen any proof or anything. My mistake.

Chris Cardell’s success coaching frauduct will teach you everything :: “From Internet Marketing to Advanced Business Thinking and much more.” Much more.

Maybe part of the “much more” is that when you can’t sell your how-to Internet crap on the Internet … then you should use direct mail. Cause nothing says “Advanced Business Thinking” like direct mail.

Of course :: Advanced Business Leader Entrepreneur Trainer VIP Chris Cardell :: couldn’t send out just any old direct mail. He had to be flagrantly deceptive … so as to match the hollowness of his product offering.

“A direct mailing consisted of what seemed to be a torn magazine or newspaper page with a handwritten Post-it note, which stated “Hi, I saw this and thought you’d find it useful - he’s really good! J”. The page arrived in a plain white envelope, which appeared to be addressed by hand, with a second class stamp attached.” 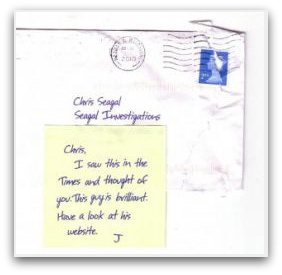 And the fake news clipping … via midnightpiper’s hubpage … 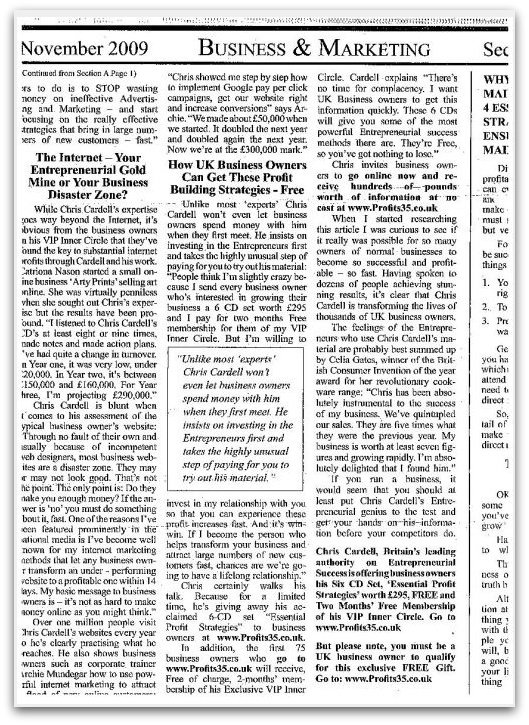 Chris has to write articles about himself because no one else gives a shit. It’s hard to get people talking about you when you’ve never done a single interesting thing.

Person :: “Hey did you hear about Chris Cardell?

Person :: “Me neither … just got this obnoxious fuckin’ thing in the mail though.”

But according to Chris on Chris the real story is that he’s “Britain’s leading authority on Entrepreneurial Success.”

“Thousands of business owners who were struggling to get customers and grow their businesses, claim to have experienced dramatic turnarounds after turning to a man who has taken the UK Entrepreneurial world by storm. Some of the business owners have just experienced steady growth - but in many cases they’ve created million pound plus businesses and experienced increases in turnover of hundreds of per cent”

Bollocks! Thousands of business owners? “Hundreds of per cent” growth? Million pound business? Me thinks the fleshy vampire queen is a liar. I demand proof god damn it! … and so did the Advertising Standards Authority. Chris couldn’t offer up anything more substantial than the dubious generalisms in his horseshit testimonials …

By implementing some of Chris’ ideas, we increased revenue within the last 12 months from £450,000 to £600,000’ says David Morris of Presto Development … ‘our profit has risen by almost 75% by implementing the ideas that Chris Cardell introduced us to …

Presto Development is actually Presto Music … here’s the site. Even if you can swallow the laughable £600,000 figure … it’s pretty clear that almost none of that is generated by the web presence … which is severely retrograde. The ASA was similarly unimpressed …

“testimonials alone did not constitute substantiation and the opinions expressed in them must be supported, where necessary, with independent evidence of their accuracy.”

Independent evidence of accuracy … hmmm that could be a problem. Don’t happen to have any of that handy … you know …. cause it’s mostly lies and stuff.

LOSER! The ASA rules against him … he can’t run the ad anymore {tiny violin}. But big fucking deal. He already ran the ad … some people already got sucked into his credit card funnel of doom via the “free offer” with continuity. It was obviously a bogus tactic … so just walk away tubby little vampire queen … let it rest. Go on to some other stupid ass thing Dan Kennedy said would work.

Oh but back to the small problem {/penis} … some people on the webz had already been talking about how cheesy :: stupid :: and deceptive this campaign was. When the ASA made its ruling … some fuel was added to the fire … and Internet genius Chis Cardell suddenly seemed to have ruined his web reputation with a failed direct mail campaign focused on the false praise of his supposed web reputation. Pretty awesome/lame depending on whether or not you are Chris Cardell.

Now Chris needs to do something! “Think Cardell … think!” says the fool to himself. Things are spiraling out of control. He puts on his thinking cap … and then his Mother’s shirt … it smells like her … as he slowly fondles the buttons he is calmed. “What should I do Mother?” he squeals in a gayish British voice. “Stupid little piggy! Have you learned nothing?” {slap :: ouch} “Find a hack lawyer to send threatening letters.”

So Vampire Piggy retains Preovolos & Associates to start a new mass mailing campaign. This campaign is all about using ignorant legal threats to repress free speech and criticism of products in commerce {frowny face!}.

At least five posts get taken down because of this shenanigans … a couple with what amount to apologies to poor Miss Piggy.

Andy Beard took his post on the subject down … but posted the C & D from the marketing ignoramus instead. Andy suggests that this plan might just backfire on Chris Cardell. I must say ol’ chaps {three eyes boiling with robot rage!} … I think he might be right about that.

The letter tries to use some trademark and copyright type words … but it’s mostly pure bullshit. Here’s a taste …

Really Olin M. Lewin Esquire? “Perpetuating and condoning notably patently false statements?” Ha! That shit is straight out of your ass! You sent threatening letters to unrepresented non-professionals :: in an attempt to abridge a fundamental human right :: with a fully fucking contrived cause of action? It’s not even a good one! It’s totally preposterous. For shame sir! For shame!

So now Vampire Piggy Chris Cardell and his overbearing fake Slavic Mother have a very serious problem to replace their previously small problem. The whole story is HERE :: along with the attempted unethical cover-up :: on a site which is sure to present the story to 100% of the people Piggy wanted left in the dark. I can’t be turfed out of the SERP’s … and lawyers don’t send me letters … do they Olin M. Lewin? No they don’t.

I encourage all of the repressed speakers to put their posts back up {I got your back!}. It is your RIGHT to criticize any product or service being held out for sale. It is your RIGHT. Don’t let some half-ass lawyer take that from you with nothing more than a poorly written letter! Fuck that! If you think something sucks … you can totally say so. Always and forever. When that becomes not true … then it’s time to die in a revolution anyway. Put your posts back up.

I’ll be most interested to hear about any further threatening actions by Chris Cardell or Preovolos & Associates. I’m kind of in the mood for filing ethics complaints anywayz …

As the English are so prone to say :: watch this space.