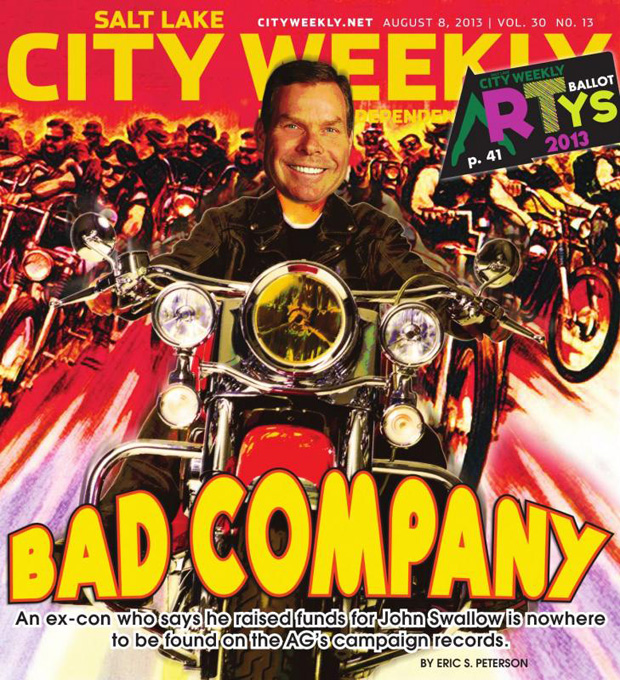 This Salt Lake City Weekly cover story is fucking amazing :: in a “sticking it to the badguys” kind of way … and fucking depressing … in a “this is how it’s going in our society” kind of way. Bad Company: An ex-con who says he raised funds for John Swallow is nowhere to be found on the AG’s campaign records. Eric Peterson :: “crushing it”… to use a totally pointless phrase popularized by someone totally pointless who I fucking hate.

Here’s a short :: and far less useful … version of the story {aka a Huffington Post}. So this guy Robert Montgomery :: who got his start with the Mormon Mafia’s Ginger King Jeremy Johnson … 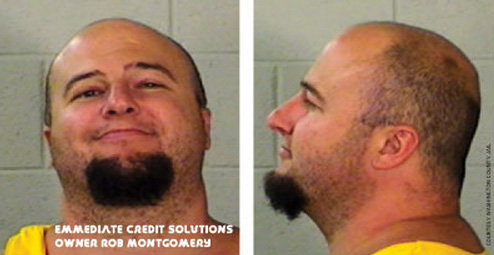 … was in jail. I know … surprising right? No big deal though :: it’s just that his wife killed herself with his gun … after he was done beating her for the umteenth time. Trouble is :: you know how it is in Obama’s America … people who have already been to jail for other felonies can have their Second Amendment rights violated in ways that make Mike Lee quiver for lost justice.

U.S. District Judge Ted Stewart noted in his 2004 decision to approve harsher sentencing for Montgomery that the “defendant engaged in a pattern of escalating violence against his wife, culminating in an incident just hours before her death.”

A July 2004 Salt Lake Tribune article on the proceedings quoted prosecutors saying that Montgomery had choked his wife into unconsciousness shortly before she took her life.

But that was then :: and this is {a couple of years later} now … so it’s all {dead wife} water under the bridge. Robert Montgomery has been on the str8 n’ narrow :: for like weeks now … and is just running a tiny little boiler room that offers credit repair services he doesn’t actually provide. Says Rob on his very own LinkedIn profile …

“I am a very aggressive entrepreneur with a very colorful background and experience(s) beyond belief! Business is still as fun and exciting to me as my very first commission paycheck from I Works Inc in 2001!!!

Emmediate Success and MyCreditCompany.com are two of my most favorite creations and I think Credit Repair is one of the most fulfilling and legit services I’ve seen… And, those who have lost their good credit standing and want it back……I’ve been their myself a time or two and am proof that the industry is legitimate!!!!!!!”

Yep :: sounds totes legit … like an ignorant ex-con trying to write a resume legit. But it was good enough for John Swallow and Mark Shurtleff :: who I guess are too dumb to know what too dumb sounds like … and who have built their feeble empires extorting comparatively minuscule sums of money from the absolutely epic scale Utah fraud machine. City Weekly has Montgomery and Swallow palling around together … like a couple of slutbags. Montgomery tries to help raise money for Swallow by holding some cops and robbers fundraisers … including a pancake & raffle shindig at Mimi’s Cafe.

“Rob got up and he was like, ‘Hey, we want you to all meet the attorney general and the future attorney general. This isn’t a get-out-of-jail-free card, but we want them to know who you are and understand this industry.’ ”

Oh and also :: you won’t need to get out of jail for free because we won’t prosecute the hand that feeds us … but we will obviously expect payoffs whenever the mood arises. Here’s Swallow campaigning at the same Mimi’s Cafe :: a slightly more appropriate venue for a scandal than was Krispy Kreme …

… different day :: different white people. This group looking more like the sort of folk that Swallow’s “aggressive entrepreneurs” are daily savaging. But like many in the Mormon Mafia :: Rob Montgomery believed in the protection racket a little too hard …

“During an ECS company meeting, Montgomery announced that Swallow would be able to keep federal regulators off his back.”

Ha! Let me guess :: he knows a guy :: who knows a guy … who knows Harry Reid? Utah’s top law enforcers are literally part of the scam :: one of the biggest {in terms of monetary damage} scams of all time. It’s pretty effing mind blowing … though I’ve adjusted to it. But serial wife beaters? Really Utah’s Attorney Generals? Really? Wife beaters :: are like … totally okay? Isn’t that something that even scammers :: and the politicians who protect them … could agree to be against?

Fucking fuck … I guess not. John Swallow :: if you were a real conservative :: a Mike Lee Tea Party conservative … you’d kill yourself right now to prevent the bloated Federal government from deficit funding your expensive trial.