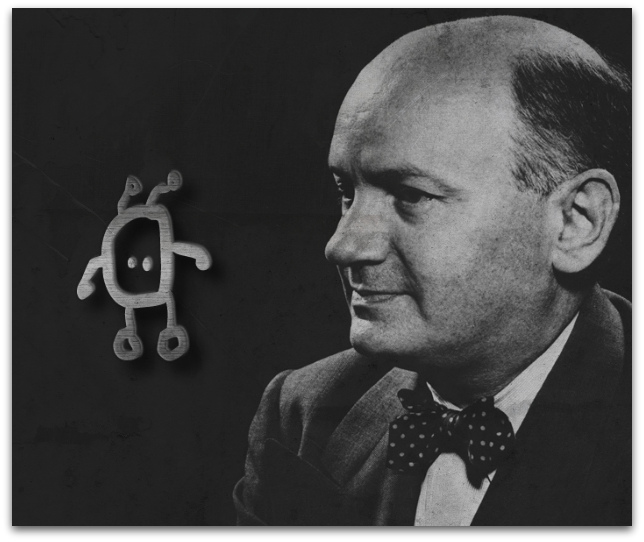 Dr. Joost Meerloo was originally called Abraham Meerloo … but Abraham was not a very trendy name to have during the Nazi occupation of Holland.

Dr. Meerloo was a practicing psychiatrist when the Nazis rolled into the Low Countries. He continued to see patients for nearly three years under the stress of the occupation until his own imprisonment necessitated an escape to England where he served as Chief of Psychiatric Type Stuff for the Dutch forces. After the war :: before moving on to America and Columbia University :: Dr. Meerloo did extensive research on the use of coercive persuasion … conducting hundreds of interviews with the victims and perpetrators of the world’s all time biggest mind fuck.

Col. Schwable :: a Marine aviator :: WWII veteran with 23 years of experience :: and no less than the chief of staff of the First Marine Aircraft Wing {not exactly a vulnerable sissy} … confessed to his North Korean captures {as did many others} that the United States was using germ warfare against the North Koreans. Not only did Col. Schwable and the other soldiers make detailed confessions :: but most of them had actually come to believe their treasonous confessions were accurate.

Dr. Meerloo told the military panel that what happened to Colonel Schwable could literally happen to anyone. You can make a Marine officer :: who has spent his whole fucking life risking his life for America :: hate America. Because the human mind is malleable :: and manipulatable.

But malleable minds don’t want to believe that they’re malleable. Famed cult researcher Dr. Margaret Thaler Singer on how everybody’s always all like “not me” …

“As 1984 begins, various totalitarian governments control and censor the media and squelch dissenting individuals. Perhaps more ominously and subtly here and elsewhere in the world, there are mini-versions of Orwell’s Big Brother, Newspeak and Thought Police. Since the early 1970’s there has been a burgeoning not of governments, but of independent entrepreneurial groups going into the mind manipulation and personality-change business. Myriads of faddist, cultists, quacks and “new age” and “new-movement” groups have emerged using Orwellian mind manipulation techniques. The groups recruit the naive, the unaffiliated, the trusting and the altruistic. They promise intellectual, spiritual and self-actualization utopias whereas the pied pipers of the past promised primarily social and political new worlds. The New Age pied pipers offer pathways to development, enlightenment and egalitarianism. Many later subject their followers to mind-numbing treatments that block thinking and subjugate free will in a context of a strictly enforced hierarchy.

Just as most soldiers believe bullets will hit only others, not themselves, most citizens like to think that their own minds and thought processes are invulnerable. “ Other people can be manipulated, but not me,” they declare. People like to think that their opinions, values and ideas are inviolate and totally self-regulated. They may admit grudgingly that they are influenced slightly by advertising. Beyond that, they want to preserve a myth in which other persons are weak-minded and easily influenced, but they are strong-minded. People cherish a fantasy that manipulators confront, browbeat and argue people into doing their bidding. They envision Big Brother coming in storm-trooper boots, holding guns to heads and forcing persons to change their beliefs, alter their personalities, and accept new ideologies. Orwell drew on the wisdom of the ages – most manipulation is subtle and covert. Orwell envisioned the evolution of an insidious, but successful mind and opinion manipulator. He would appear as a smiling, seemingly beneficent Big Brother. But instead of one Big Brother, we see hordes of Big Brothers in the world today.”

Menticide is a word that Dr. Meerloo coined to describe the objective of Big Brother and all his lil’ Mini-Mes :: the complete destruction of a person’s mind and spirit … to be replaced by somebody else’s empty bullshit.

Unfortunately menticide isn’t that hard :: here’s a blueprint. Even more unfortunately :: stupid humans are so desperate not to think about it … that almost nothing has ever been done to strengthen society’s defenses against its insidious dangers.

Two years after Dr. Meerloo’s death in 1976 :: and two decades after he first laid thought control out there as actionable science :: 912 people were murdered by Jim Jones’ epic scale Jonestown menticide. Each year until her death in 2003 :: Dr. Singer attended a memorial service for the Jonestown victims … which included 276 children. She used those days to remind herself of why fighting cults was worth the suffering … and fight she did … for a very long time. But the “not mes” have always remained steadfastly against action :: and so in spite of several generations worth of valiant effort … laws don’t exist to stop Death Rays before they kill people. Kinda of hard to stop them even after they kill people.

“Why isn’t anything being done to stop this crazy shit?” :: you people asks me all the time. I don’t know is the answer I give … but I do know that that question predates the Beatles.

Dr. Meerloo’s 1956 classic The Rape of the Mind proffers one solution to the problem that readers of the fake robot blog may recognize …

“We must learn to treat the demagogue and aspirant dictator in our midst just as we should treat our external enemies in a cold war – with the weapon of ridicule. The demagogue himself is almost incapable of humor of any sort, and if we treat him with humor, he will begin to collapse. Humor is, after all, related to a sense of perspective. If we can see how things should be, we can see how askew they can get, and we can recognize distortion when we are confronted with it. Put the demagogue’s statements in perspective, and you will see how utterly distorted they are. How can we possibly take them seriously or answer them seriously? We have important business to attend to – matters of life and death both for ourselves as individuals and for our nation as a whole. The demagogue relies for his effectiveness on the fact that people will take seriously the fantastic accusations he makes; will discuss the phony issues he raises as if they had reality, or will be thrown into such a state of panic by his accusations and charges that they will simply abdicate their right to think and verify for themselves.

The fact is that the demagogue is not appealing to what is rational and mature in man; he is appealing to what is most irrational and most immature. To attempt to answer his ravings with logic is to attempt the impossible. First of all, by so doing we accept his battling premises, and we find ourselves trapped in an argument on terms he has chosen. It is always easier to defeat an enemy on your own ground, and by choosing your own terms. In addition, the demagogue either is, or pretends to be, incapable of the kind of logic that makes discussion and clarification possible. He is a master at changing the subject. It is worse than criminal for us to get ourselves involved in endless, pointless, and inevitably vituperative arguments with men who are less concerned with truth, social good, and real problems than they are with gaining unlimited attention and power for themselves.

In their defense against psychological attacks on their freedom, the people need humor and good sense first. Consistent approval or silent acceptance of any terror-provoking strategy will result only in the downfall of our democratic system. Confusion undermines confidence.”