Of Gnomes and Robots 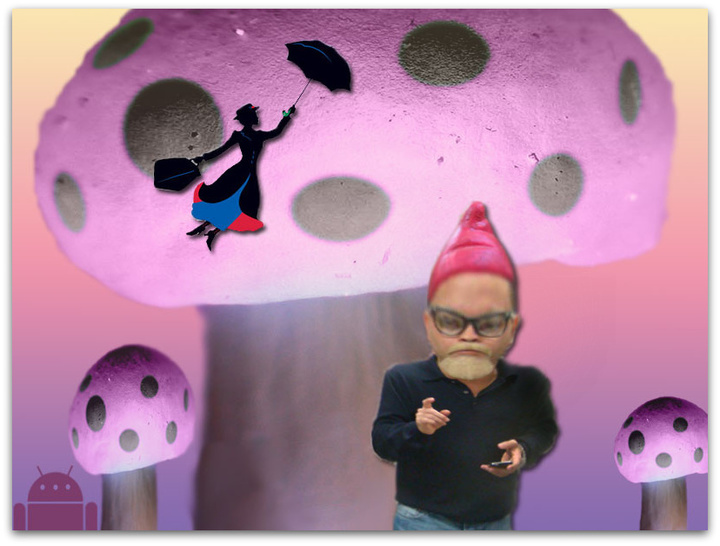 Gnomes are known to be grumps :: but as the male gnome balds and approaches menopause like village idiot Mike Filsaime is now :: things can get out of control right quick.

Wait … that was hateful of me! It’s not right for me to dehumanize predators in order to shine a light on their wickedness and empower their victims. I told myself I was going to be a better me! Argh! I apologize to everyone :: especially Jesus. I know how frustrated Jesus gets with people “going too far” defending the poor and vulnerable and such. Let’s try this again …

Sometimes when Gnomes are in PMS they piss themselves. People say that’s why Mike Filsaime smells so bad. Personally :: I think it’s got to be more than just piss … maybe he has a ruptured gallbladder or something? I asked my doctor friend about it … but she said she didn’t really know anything about Gnomes.

The day before the Syndicate Shit Storm :: Vicious Garden Gnome Mike Filsaime had a d-bag epiphany …

“I simply want to be no part of hyped up products. Until now it was hard to tell someone “No” after they supported you well and asked you to reciprocate weeks or months early. This blog post explains what is simply off limits. This is some stuff that came to my mind late at night. There could, of course, be other things that are not in the customers best interest. Common sense can figure that out.”

… common sense can figure out that those are some of the most favoritest tactics of the Gnome his self. But don’t do them from now on if you want to be supported with various reciprocates.

This hugely epic :: mind bending :: hypocrisy was bound to get people talking :: and suppressing their vomit. But then he went and mentioned me …

“There are a lot of hate blogs out there and it is seemingly getting hard to know the good from the bad. Time to separate from the trash. Get your act together or get out of this arena. There is just no room for it.

Speaking of “Hate Blogs” – I will be releasing a personal response about the “Jones’s” real soon. Time to set the record straight ;)”

The Gnome seems surprised when so many non-sheeple start showing up … maybe he doesn’t understand that the policy was to never mention the robot … and now someone has mentioned the robot. Well sort of :: he still can’t quite bring his Gnome fingers to type “SaltyDroid” … “Jones’s” will have to do for now … baby steps.

So he’s a fucking hypocrite in the post :: he mentions me … then people call him on being a hypocrite … and he fucking blames me. Common sense can figure that out … cause I can’t.

“Jason Jones is a sad human being and I pitty him. And you for following him. I will deal with him soon. Jason Jones will finally hear from me. Now go run to his hate blog and warn him about me. I will expose him for the low life he his. Go now minion, go run to your powerful OZ. Jason Jones, you reading this. Get your costume on and make your post. It’s my turn. A sad human being will now be seen for what he is.”

“Minions of Jason Jones. I have spent the better part of the day talking to the 5% of you that are coming from his blog to try to spin this and trash me as you stated you would on his blog. We had good comments coming from people. All of a sudden a minion posted my blog on his blog and you are all coming here now to trash talk the same things you are saying there. As I said, this week I will address Jason and his hate confused followers. I let about 10 of you say what you want so I can prove your facts are wrong. With that said, I am letting you know you are wasting your time from here forward. Take it to his site. Hate and trash is welcome and thrives there. This is about discussion to make things better. Waste your time and post and I will nuke the comment.”

I’m no PR expert like Mark Fabiani or anything :: but I’m pretty sure that was dumb and dumber.

So The Gnome has a plan … and he seems real proud of himself.

And then The Droid said :: “let there be a shit storm” :: and behold there was a shit storm …

… oh snap! What terrible timing for the Vicious Garden Gnome.

“Mike Young … wtf?” :: says a lot of you. “No comment … for now” :: says me. I will say this {but it doesn’t count as comment cause I make my own rules} … if Mike Young was going to pull his retro-mini-pistols on me … why would he wait until it looked like I was just about to morph into Voltron and start smushing evil doers in single swift stomps? And my diabolical comment got posted … and stayed up … yours too right? Anywayz …

The interview is revealing. Many peeps think it’s Mike Young making excuses for The Syndicate. I’m not so sure … it says “interview” … I think the eight numbered points are Mike Gnome’s points not Mike Young’s. Those points could be rewritten like this …

2) The Syndicate exists :: they are in daily communication via email. Koenigs and Brunson are not in The Syndicate.

4) There is a Syndicate calendar.

6) Affiliates are placed in different tiers and then paid and treated differently.

7) “Getting consulting from a peer about how to create an offer is not price fixing it is simply advice on what to sell and what to sell it for.”

8) JustLikeMyChild isn’t a money laundering operation for The Syndicate … but the Gnome could only spare $500 for them anywayz.

Okay … pretty much knew all of that already … but the confession definitely helps.

The P.S. is written by The Gnome without lawyerly editing … and it’s pretty much all Jason Jones all the time.

I am writing this today about a blogger, Jason Michael Jones. He goes by the name “Salty Droid.”

My middle name huh guy? It was cute and funny when I did it … you know … because I am Jason Michael Jones and everything. A tinge more toward the creepy weirdo side of things when you do it.

Jason Jones is obviously very smart, witty, very funny, and has one of the best writing styles you may find around.

Thanks a lot Gnome :: that really means the world to me coming from you.

But he and I differ in many ways.

Yes … many ways. Many many ways. He would count the ways … but him not being able to count is one of the ways.

“He wants to save the world from predators’, that is good. He just choose to do it in a mean and vicious way. He refers to me as vicious.”

Not true! I refer to you as “Vicious Garden Gnome” :: totally different. If I just called you “vicious” … no one would read me.

Jason Jones seeks to embarrass people, and has done a good job, by getting his hands on private property. Contrary to popular belief, this is not given to him by insiders as his readers suggest in comments (that he will not correct.) The truth is he steals it off servers. Marketers make mistakes with a loophole you could call it in cloud computing like s3 Amazon by not securing the ACL settings.

The Gnome doesn’t know how I got the tapes … but I guess he’s comfortable stating that I “stole” them. I won’t say exactly how I got them :: however I can confirm that both the Jenkins/Walker tapes … and the Koenigs/Robbins tapes :: eventually ended up on my hard drive because they were put out onto the web for all the world to see by “Internet gurus” who seem to understand the Internet about as well as your average Florida grandmother. Anyone could have sent them to me :: because anyone could have seen them. I didn’t mention it because I like to give d-bags the opportunity to lie to each other … they’re fun like that.

“Jason Jones has nothing to lose. If you fall, he will write about you as if he takes credit and warned the world of you. He did it with James Arthur Ray, he did it with Bernie Madoff.”

Second :: Bernie Madoff? Is it possible that The Gnome is so stupid he doesn’t understand why Madoff made his cameo in the movie?

Oh my gosh Gnomey Gnome … I’m so fucking sorry! I didn’t know I was hurting your tiny little pygmy feelings. Sheesh … you should have said something sooner. No more saying things like :: “I hope your rapidly diminishing virility outlasts your prison stint and you have opportunity to pay for ass yet again.” No more of that. Breath free little Gnome … I think you’re pretty … promise.

“To Jason Jones, I am not looking to embarrass you or do an expose on you.”

Great. That’s a relief. Hate to end up on the front page of Illiteracy Digest.

“To his readers, I ask that you investigate things for yourself.”

Yes :: I ask that you do that also. And once your done investigating … send it on over to me and I’ll make it hilarious. We’re a good team like that aren’t we minions?

“But think twice about what it says about you to be cursing, and supporting a hate site. Read the Jason Jones’ blog with a fresh perspective. Is this something you would want your kids to support and admire.”

OMG this fucking rant is about me … and even I’m bored by it! “He’s just a hater” :: don’t need 2000 words barely constituting sentences to say that shit. Same lame line they’ve been feeding the sheeple behind closed stable doors all these long months. It’s not working.

To our outstanding success and forever joy happy time,

PS: The Gnome is short.