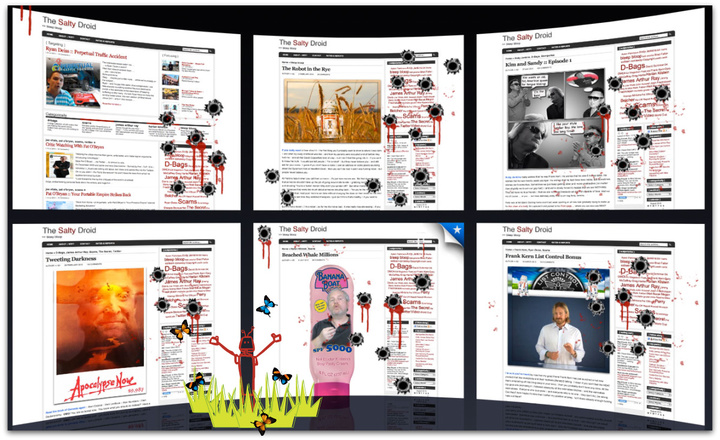 Since The Salty Droid’s momentous Hello World twenty glorious months ago :: many an irritated d-bag has opined about the relative value of this site to society. Droid protocol dictates that these flaming turd flingers :: and piss poor propagandists :: be briefly slapped about the face … and then largely ignored. But perhaps that’s unfair :: perhaps more of an effort should be made to reach around to the other side :: and to respond genuinely to genuine criticisms.

The following letter has been remixed and assembled exclusively from the many nega-comments left on this site by d-bags :: proxies :: and trolls {oh my!}. On the one hand :: they don’t like criticism. On the other {ironic} hand :: everyone’s a fucking critic.

The world could breathe easier if you would just cease to exist.

Instead of spending your time on hate and anger be the better man if you really think you have anything to offer but negative controversy. You should try being more productive and do something positive in this world than just throw out negative.

Your nothing but a punk. You coward ass lying sack of shit. You know they’re gonna make you pay boy. You’re gonna be spending the rest of your life bent over grabbing your ankles. You are ruining peoples income, sites like this should be banned.

Man, I honestly can’t believe you can sit in your grandmothers basement typing this B.S. All the guys you are knocking are successful marketers. Without them, you would NOT EVEN HAVE A WEBSITE. If you can “bleep bloop” your sorry retrofitted special-ed processors into seeing that without their success, you would have NOTHING. That’s not robotic – that’s how a certain living organism operates – a PARASITE.

Word on the street is you had to move (into your parent’s basesment) because of your junky addiction, and you were without internet access because you pawned your computer for a couple of hits.

I’ve been trying to figure out whether you mean for this blog to be taken seriously. I think I have my answer–we both know (or at least I know–do you?) that attacks on a person’s appearance are the kind of bitchy school-girl taunts people fall back on when they have no real ammunition.

No intelligent person can take you seriously when you write this stuff. I don’t have a fucking clue what the hell you just tried to say in this rambling bizarre post. Your writing and analysis is so one-dimensional that it lampoons itself.

You don’t even have the balls to show your face. I know you were the guy that got picked on in high school and your mommy cleaned your wounds on a daily basis from your ASS BEATINGS, but this is the real world now. All you have is a broke ass website.

The only person trying to ‘hurt’ someone else is Salty here…slander and words can hurt just as much as physical pain/financial pain. Luckily, nobody really cares what he has to say. What the bloody hell is the point of this site anyway? It doesn’t sell anything so is just a waste of time.

I should kick you, beat your face in, shove a dilido up your ass (i know youll LOVE that), cut your salty chode off and feed it to u and then shoot you in your fucking head!!!

Even if Belcher is totally guilty, you’re more of a sick loser than he is.

The world would be a better place without you in it. You’re the only “D-Bag” mentioned on this entire site. Do something with your life and get out of your mother’s basement.

Thank you D-bags :: that was lovely and productive. I have taken a few moments to consider your considerations :: and I’ve decided … BiteMe!

But that’s all very negative. We mustn’t be negative lest the flames of everlasting unicorn wealth be blown out by the winds of our blackened chakras. So let’s end with a more upbeat comment quote. This one left by my very own :: oft mentioned :: Mother {link} …

“Salty, I bet your Mom is proud of you – even if you do live in her basement!”