The Lion :: the Witch and the TrollDrones 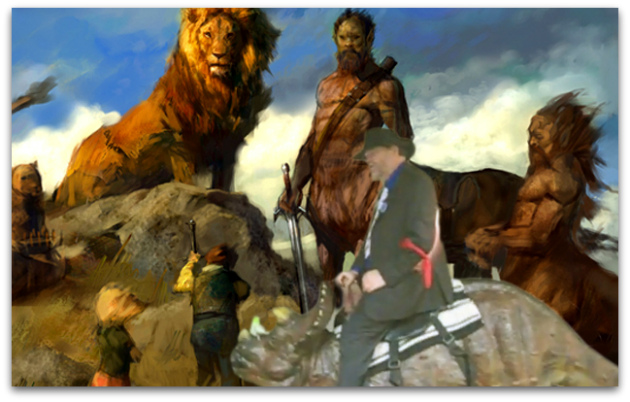 Skeptics mostly like to talk about what it means to be a Skeptic :: it makes it all but impossible for a skeptical fake robot to be a Skeptic. If your skepticalism comes with a t-shirt :: then you’re just a person who likes clubs. I’m fucking skeptical of your dumb clubs.

Still :: whatever … t-shirt clubs are better than you sobbing all over me because you’re lonely and all the happy people on the match.com commercials are lies.

Last year I showed up at a t-shirt club party inadvertently while on my way to punch the devil str8 in his fat face {I fucking hate that guy!}. The t-shirt club was having a slumber party pillow fight about being nice.

Somebody was like :: “maybe people will respect us and our ideas more if we’re not horrible.”

And then PZ Myers was like :: “EVERYONE IS STUPID BUT ME!!” … the dirty little troll that lives in his beard told him to say it.

“Satisfied? I’m a dick. For sure … no room for debate.

And yet … I’m effective. I have a large audience {bigger than Skepticblog by a pretty wide margin}. And I’m unquestionably helping open eyes in a dark room.

If you’re talking to a nice Christian lady who just wants to tell you how much she loves Jesus while you’re flying to Tampa … then yeah … don’t be a dick. If you write a blog that aims to slow down cult style con men … then maybe tea and conversation isn’t going to do the trick.”

So many people feel that big numbers equates effectiveness. If you have a substantial audience, it simply MUST mean you’re doing something right. It’s a bold assumption, but empty on closer examination. The very fact you’ve stated it is unquestionable that you’re ‘helping open eyes in a dark room’ reflects (even if it is unintentional) that you’re happy to presume it’s true without a desire to really stop and think critically about it.

Thanks Mr. Wizard! That really gets right to the core of the point like only a t-shirt Skeptic could.

That was the only time PZ Myers and I were in the same conversation until he shuffled his ignorant ass into my wheelhouse by parroting the lies of conwomen Naomi Dunford … one of the blog’s Top 3 most disgusting scammers.

“I’m sorry, but that saltydroid site is advocating harassment and worse. It is now on the blacklist, please don’t bother referencing it ever again.”

… says PZ Myers after deleting a link to my more accurate information.

“Name-calling happens all the time; I even indulge in it from time to time. I can also tell you that the majority of my audiences heartily approve and sympathize, and that only a small minority freak out and get upset.”

Huh :: I guess consistency is for the Catholics … or something.

After PZ Myers deleted a link to me :: failed to print my comment :: and after my subsequent post about how EVERYTHING he said about Anthony Navarro was amazingly wrong :: and defamatory :: and disgusting … PZ Myers wrote a post calling me an “obsessive-compulsive kook” …

“Now I’m being warned to prepare for an “epic shitstorm” from some loony site because, apparently, I misrepresented Anthony Navarro, Jr. by quoting his delusions and threats at length. We’re supposed to get flooded with indignant trolls who will take me down. I haven’t seen any — at least, no more than usual — and I checked the traffic stats to see if there was an assault in progress, and nope, not even a blip.”

PZ Myers uses the same Internet strategies as mean girl teenagers on Facebook :: so I guess he supposes that everyone else is going to do the same. Sorry douche :: I fight my own fights … trolling someone else’s forum with proxies {like you just did} shows impotence not strength.

“Yeah, that kind of nonsense is what prompted me to immediately put his URL in the blacklist. Quite the contrary to his claim, my action was to dismiss and disregard him entirely.

That’s probably what pissed him off most. I think he’s a joke.”

Don’t care what you think at all you boring old man :: I care about your victim bashing lies. Guess what else big boy? I don’t get pissed :: that’s what makes this blog so funny … that and all the awesome jokes.

“We aren’t running for office. We aren’t trying to appeal to the largest percentage of the population. We aren’t interested in compromising our views or our style because someone might be offended. And I find the thought of anyone trying to tell us all that there is a certain range of acceptable behavior for skeptics or atheists or whatever rather ridiculous, especially when the whole raison d’etre of such people is to criticize the comfortable, and doubly ridiculous when you can’t even concretely define what that behavior is.”

It’s not right for anyone to set an acceptable range of behaviors :: unless those behaviors tend to show what a tiny little insecure fool PZ Myers is … those must be immediately blacklisted.

After PZ’s issue ignoring follow-up to his research and truth ignoring bigotry :: his bizarrely unintellectual followers offered up a massive load of fool turds to prove exactly how much they hate reading and stuff.

What’s whit the constant, completely out of context, mentioning of unicorns in the post on saltyandroid?

Other than swearing like a pirate this guy makes no sense to me.

Yes, a faitheist could have written that quote. Yet the rest of the article (and comments) seems to assume that atheists know there’s a God but hate Him.

Pretty sure that’s inline with the tenuous analogies and references to the Chronicles of Narnia that thinly run through that spewfest.

For example, it lists PZ’s points and after “destroyed his business” the blogger has added “(that wasn’t me)”! So it might be the wackaloon brother himself.

If the hordes of gawd-fearing loonies do appear, I hope they send their A team.

Ever notice how the loonies always seem to have trouble with punctuation?

Terrifying stuff. The level of ignorance and hatred is mind boggling.

That scumbag at the other site deletes posts they don’t agree with and replaces it with LOSER! What a fucking surprise that they’re stupid and dishonest. Don’t bother with them. They’re human filth.

Surely the great and powerful Salty Droid doesn’t make empty threats. No doubt his well-washed hordes are simply biding their time, trying to lulz us into a false sense of security before they unleash their dreaded fecal hurricane.

The crazy is strong over there. The whole, lengthy, incoherent rant is a study in delusion, projection, confirmation bias and a deeply weird Narnia obsession …

I mean: Narnia theokooks? In 2011? How charmingly retro.

I read thru this guys website and I still have no idea what the fuck he’s talking about about anything.

For fuck’s sake, but Salty Droid is damned near incoherent.

Salty Droid needs to investigate his own damn self for promising stuff on the Internet that he’s totally incapable of delivering….

I tried to read the linked blog entry, but I didn’t understand it at all.

Had a brief chat over there, gave up when I noticed the auto-censor plugin. Gotta love those opinion-based blogs that cut unpopular opinions.

I’d prefer to hear it from him, but he’s too much of a coward to come here and explain himself. He just lies about being censored.

So some guy on the internet takes it upon himself to be judge, jury and executioner, and rational people are just supposed to sit up, or else what ? You’ll send your sycophants over here to bother people ? Ooooh, Scary.

Actually I take back my first statement, he isn’t clueless, he’s a liar.

Salty Droid can just be angry and flippant at Naomi for reasons never explicitly stated, can dismiss everything she says for reasons not fully spelled out, and can disregard the very idea that what she says can be confirmed elsewhere by instead blustering about how much good they do in other cases.

Methinks Paltry ‘Roid is trying to stir up shit with a vastly more popular blog in order to inflate his site’s traffic.

Sounds like they really got a handle on this situation. Why bother KNOWING when you can spend your time SAYING instead. Saying is so much easier than knowing … and it leaves more time for donuts.

I know I told you next time was the Navarro story :: but I just found out I’m a liar … and I meant next next time.