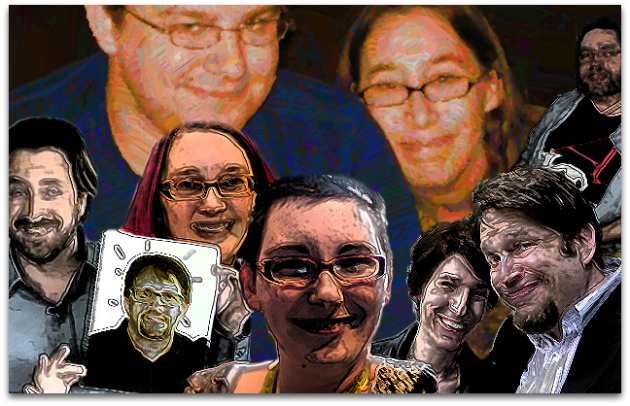 Alison Newton met Dave Navarro 17 years ago at NC State. They were close friends for years before they decided to get matching last names. The matching names were a commitment that they both took seriously. They had both come from severely broken homes :: and both were determined to protect their own children from the same fate.

By the time I met Alison Navarro a couple of months ago :: Naomi Dunford and the cult of Internet Marketing had already destroyed everything that Dave and Alison had worked so hard to build. I talked about Dave and Naomi on a post about how I think Brian Clark is one of the worst scammers on the Internet. After which Alison sent me a lengthy :: and quite beautiful :: email that ended like this …

“What you do is important; it’s educating people about the true nature of the people they trust, or at the very least getting the word out via your site about the need for educating others that not everyone can be trusted.

I read your latest post tonight and I wanted to thank you for turning the rock over, Droid. Don’t let them hide anymore if you can help it.”

Her life is a super messed up hell-scape :: but she was still able to feel genuine sympathy for the problems and plight of others. It’s the path straight to my fake robot heart. Alison :: like so many other spousal victims of the unicorn delusion :: was put into an uncomfortable moral position. She wanted to be supportive of Dave’s vision for his own life :: but whenever she got glimpses inside the world of his “business” … she didn’t like what she saw. Probably the reason Dave kept her mostly in the dark about what he was doing.

After Dave quit his job at Lockheed Martin :: Alison suddenly found herself dependent on the unicorn machine for necessities. She’s still feeling bad about it. Here she is just a couple of days ago :: trying to convince Jason that she shares some blame …

If Dave hadn’t walked out :: the tension in their marriage over an issue of core morality would have continued to build … making life harder … and worser. If you let “them” corrupt you :: you’re letting “them” corrupt your family. If you’re feeding your kids with affiliate payments from Frank Kern … then you’re making your kids unwilling parties to Frank Kern’s amorality.

Dave and Alison didn’t have a perfect marriage :: but they had a stable marriage that they were both working to improve. Alison was sure they were getting stronger … that they were both growing up. Dave outlined his goals and aims and whatever in journals labeled by year :: and they always started out with stuff like this … 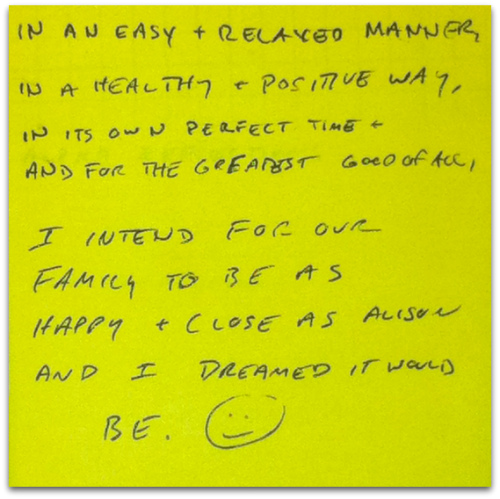 Alison says that Dave was an excellent father :: and he was well-loved by his kids. He made rules for himself :: good rules … 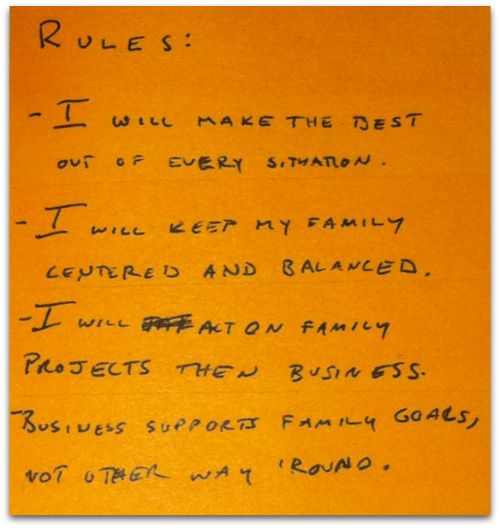 But increasingly Dave’s “business” was coming first. Long days at his real job :: plus long days at his fake job … was leaving less and less time to keep his family centered and balanced. It was a point of contention with Alison. Adding to the stress was Dave’s extreme unhappiness with his job. Dave was a quality control manager at a small company that made simulation type software. Lockheed Martin liked the technology and purchased the company :: pulling Dave into a highly bureaucratic environment that he found unsatisfying.

It’s unclear if his final months at Lockheed were so stressful because Dave truly disliked his job :: or because of Naomi Dunford’s relentless pressure :: or because he knew he was about to make a gigantic mistake … but he was stressed enough that Alison had started worrying about his health.

Quitting his job was supposed to make things better :: relieve his stress :: allow for more family time :: allow for more Alison time … but it had the opposite effect on all counts. Dave became more and more distant … less and less like the Dave.

After he returned from BlogWorld 2010 in Las Vegas :: Dave’s actions turned downright bizarre. Not sleeping :: ignoring hygiene :: shouting his kids down in public :: getting lost on the way to oft frequented locations. Alison stopped off at a Wendy’s drive-thru :: when the voice came over the speaker :: Dave had a full on fight-or-flight reaction … attempting as best he could to get in a fetal position below the dashboard.

Alison was freaked out. On Oct 31st she went into Dave’s office to talk to him about hiding out in there 24/7 :: Dave looked up at her stone faced and said he was leaving so he could spend more time with his business. It wasn’t just the shock of such an abrupt pronouncement :: but the tone with which it was delivered … as though he’d never cared for her in the least.

For a week Alison walked around in a daze :: not sleeping :: vomiting up anything she ate … all while trying to keep it together in front of the kids. On Nov 8th she called her sister-in-law Laura and told her what happened. Laura asked how she could help :: Alison said she didn’t know other than being in big time need of a hug. Anthony and Laura jumped in their car and immediately made the three-hour trek from Charlotte to Raleigh.

Anthony and Laura were shocked. Anthony and Dave had always been close :: and Anthony couldn’t understand Dave just disappearing into the night without a word. He told me this is the sort of thing he would expect from other of his loved ones :: and you’d just have to roll with it … other people’s lives are their own. But this was so perplexingly out of character for David Navarro. Anthony tried to call and email Dave to no avail.

The following day Dave was scheduled to take Jacob to Taekwondo :: he didn’t know that Anthony and Laura were in town. Here is Alison’s description of what Naomi Dunford would later describe to Jacob as “The Great Anthony And His Car Ambush Of 2010” …

… aka Dave’s family asking him why he’s leaving his family. 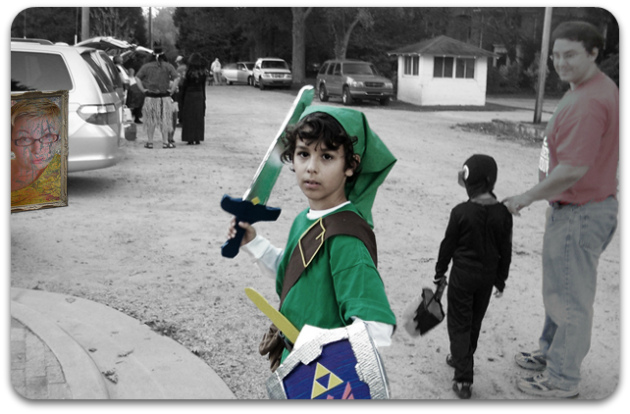 Anthony and Christine decided :: independent of Alison :: to have Dave evaluated by mental health professionals. It wasn’t a decision taken lightly :: but on the totality of the circumstances it seemed the right move. Anthony and Christine know in a deeply personal way the vulnerabilities left behind by a horrid event like the murder of your mother and the subsequent prosecution of your father. Anthony and Christine know :: unlike all you useless chirpers on the Interwebs :: how Dave got shuffled around from one bad foster situation to the next until Anthony was finally able to arrange a stable home in North Carolina with a nice lady named … wait for it … Debbie.

Anthony has been demonized by Naomi Dunford as some sort of dangerous religious fundamentalist … but it’s a preposterous accusation. David was responsible for bringing non-Catholic Jesus into the Navarro family :: as Alison explains like the fundamentalist that she’s not …

For the next six months :: Dave Navarro didn’t see his kids because he was too “in fear of his life” at the hands of his nice guy brother who lives in a different city. Laura offered to check herself and Anthony in at the police station if that meant Dave wouldn’t miss seeing his kids on Christmas … but he did miss seeing them. And he missed supporting them … making no deposit in May … transferring money from Jacob’s college fund in lieu of payment in August … and never depositing a consistent amount. Meanwhile credit card bills show Dave flying all about the globe spending money like he’s got money to spend. A recent second mortgage that Alison was told amounted to $10K :: turned out to be for $30K … and it’s not getting paid.

An attorney starts working pro bono to try to help Alison secure a separation agreement. When Dave’s attorney can find him :: he stalls and continues to insist on strange changes. Eventually he restarts visitation with the kids. Their therapist emphasizes to Dave how important it is that he NOT disappear again … two disappearings is much harder on a kid than one.

But he did disappear again.

Dave Navarro has had no contact with his family since The Salty Droid started posting about Naomi Dunford’s spider webs. Jacob had his one and only 16th birthday … not so much as a text message. After the Spider Shitstorm Dave’s lawyer contacted Alison’s lawyer …

“David has asked me to inform you that he will not be able to sign the separation agreement. Because of his brother’s recent escalation in his attempts to ruin his reputation via contact with the owner of an internet hate site, David’s business has suffered an unrecoverable blow that makes meeting the financial requirements of the agreement impossible.

Additionally, please inform Alison that David will not be returning to Raleigh in the foreseeable future for safety issues. As a result of the recent escalation, he is currently receiving levels of harassment and threats that make visiting Raleigh or giving her a timeframe in which he will be there unsafe …

Please inform Alison that David is no longer personally checking his email due to the emotional toll of hate mail and online attacks, and that his assistant will check it for him, and will filter any relevant details to him and make any necessary replies.”

The nonexistent Droid-based hate mail is so bad that Dave can’t read emails from his wife about his kids. It’s a shame because some of his wife’s emails {which I am able to read in spite of my hate mail} contain some pretty hilarious gallows humor. Here’s one …

“Wrote a bad check for groceries for the kids this morning. Hooray for internet marketing!”

A few weeks after Dave’s lawyer called this fake robot blog a “hate site” :: she ceased her representation of Dave Navarro. And after almost two months of zero communication from Dave :: Alison got an email that started like this …

This is Jason, David’s virtual assistant. He wanted me to tell you that …

Not cool. Not normal.

Yet in spite of all this bullshit :: when I asked Alison if it was too late for her and Dave to reconcile … she couldn’t rule it out. She told me that she can still see the wounded eight year old Dave getting shuffled from place to place :: feeling not loved and not wanted :: and she can still remember the man she’s loved for so long. She’s hoping to see that guy again sometime … even though things have changed.

Not too long ago :: some of Dave’s former colleagues knocked on Alison’s door. They have a new :: smaller :: company again and are desperate to have Dave back … because Dave rocked at his real job. He hasn’t responded to their communications … I guess because his “assistant” didn’t think it was relevant.

Dave :: your wife is like the awesomest … go home.

Dave :: the mother of your children told me that … 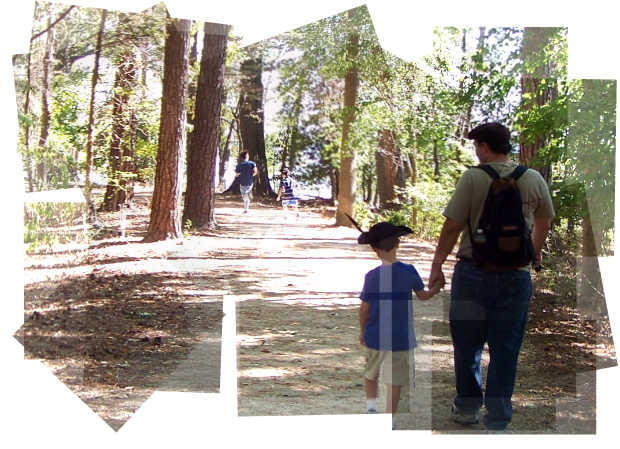