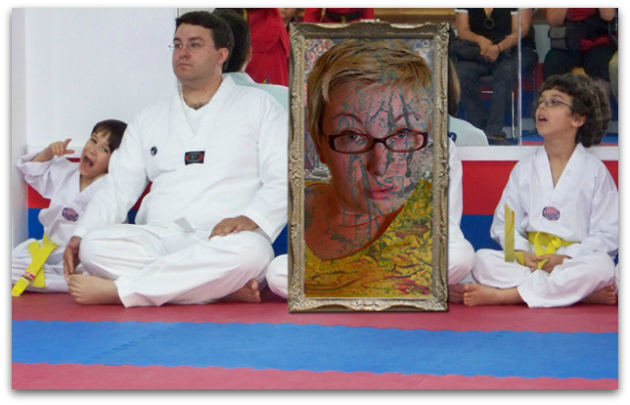 Naomi Dunford spent years poisoning Dave Navarro against his own family. She succeeded in getting him to walk out without warning … and without explanation. Unless you want to count :: “I just wanna work on my business” :: as a valid explanation for abandoning your wife and kids … but I don’t.

Naomi’s propaganda campaign to blame Dave’s brother Anthony for everything {including Dave’s deciding not to visit his kids for six straight months} :: which was most recently echoed by University of Minnesota Morris Professor PZ Myers :: began almost immediately.

As previously mentioned :: Dave’s oldest took to the webs to call his Dad out on his epic bullshit. That campaign included a post on Naomi Dunford’s Facebook wall. Naomi was just a business associate of Dave’s according to the information the Navarros had at the time. Naomi deleted Jacob’s public comment :: and responded by Facebook private message.

So while you wait patiently for me to finish this most difficult of stories :: please look in horror at Naomi Dunford’s poisonous audacity …

Thanks so much for getting in touch – I’m sorry I only saw your post to my Facebook page now. I figured you might have put it on my page because you weren’t sure how to get in touch with me privately, so I took it down so we can discuss this here. (Obviously, if Facebook doesn’t really work for you, that’s totally cool – my other contact information is at the bottom of this message.)

Your dad and I work very closely together – we were at the same conference in New York last weekend, and we’re creating several new projects in the remainder of this year and into the next. I’ve heard a fair bit about what’s going on with your household situation at the moment – I’ve certainly heard about it from your dad, but your uncle has been in touch with me via my blog as well. I know about the website that your uncle has created, and as far as I’m aware, your dad’s lawyer has advised him not to get in touch with your uncle in case it goes to a libel suit. I’m not aware that you’ve tried to get in touch with your dad beyond a tweet earlier today, and to my knowledge, your dad has responded to every communication he’s received from your mom. Obviously I’m not reading his email, but if you’ve tried to get in touch – and I mean YOU, not your uncle – I’m pretty sure your dad doesn’t know about it.

I wish I had more to say. I’m so incredibly sorry you’re going through this – my parents have 8 divorces between them and it’s never pretty. As far as I know, by the time you get this your dad will have already emailed you. I know you don’t know me from a hole in the ground and so what I say here doesn’t carry a lot of weight but I hope you understand, your dad loves the shit out of you and is sorry as hell that you’re getting dragged through this. I hope hearing that doesn’t make you angrier, but it’s true, so I may as well say it.

I know it sounds dumb, but if there is ANYTHING I can do, please let me know. I don’t know what your telecommunication situation is like but if you ever want to get in touch, you can get me at nd@ittybiz.com (that’s a private email address that my staff doesn’t see) or my cell which is 226-688-9436.

For all the good it does coming from a total stranger, hang in there. It gets less hard, I promise.

OK, so maybe we can put this message in the Things People Should’ve Had The Balls To Do A Week And A Half Ago file? I have a feeling this isn’t the only piece of correspondence that’s going to end up in there. :)

I hope you’re okay. I’ve been thinking about you a lot lately. God, how weird does THAT sound?

First of all, you didn’t drag me into anything. If anybody dragged me, it was your dad. Or maybe me. I moved here to start a business with the guy and I see him every day. Nice timing, huh? The very nature of the situation necessitates my involvement, dragged or otherwise.

I’m pretty conflicted. I mean, I have a hell of a lot of loyalty to your dad. We’ve been working together for years and are finally reaching some decent traction. He’s probably my best friend, which is a show of how incredibly pathetic my life is. It’s kind of in my best interests to keep him on the rails and not constantly exposed to more drama than he needs to be. If he needs someone to support him through this, not only do I have to be here for him, I want to. If that means I have to strongly recommend he stay the hell away from the lion’s den that was your house circa The Great Anthony And His Car Ambush Of 2010, well, that’s what I’m going to do.

At the same time, you and your family are going through some pretty wretched shit and I feel for you. I know… me feeling for you plus $5 will get you a pumpkin latte, but there you go.

I know he hasn’t responded to the email you sent him and I know he feels like a dick about it and I know he still has no idea how to reply. I mean, what’s he going to say? If he says he’s sorry, chances are you’ll say something like, “If you’re so sorry, why don’t you just come home?” If he says he loves you and misses the hell out of you, “Thanks, Dad, you’re sure not acting like it.” If he tells you that yelling at him isn’t going to get a damn thing accomplished, “You lost the right to tell me how to speak to you when you walked out on us/abandoned us/whatever.”

If anything he says – even just showing up and being emotionally present and telling you what happened and why – is just going to hand you reasons to be pissed at him, who’s helped by that? Like everyone else involved, he’s seriously messed up emotionally right now. I know that in your position you probably don’t care, and that you think he brought this on himself. Nobody’s going to blame you for that. But seriously emotionally messed up people aren’t exactly going to drop their head and hand you the blade.

But please know he’s thinking about you. A lot.

I guess I’m just writing this to say, well, I’m not ignoring you. I’m just in over my head a little bit here, as I’m sure are you. I guess you’re in a spot where you’re pissed and confused and feeling totally powerless? And pissed? And, uh, pissed?