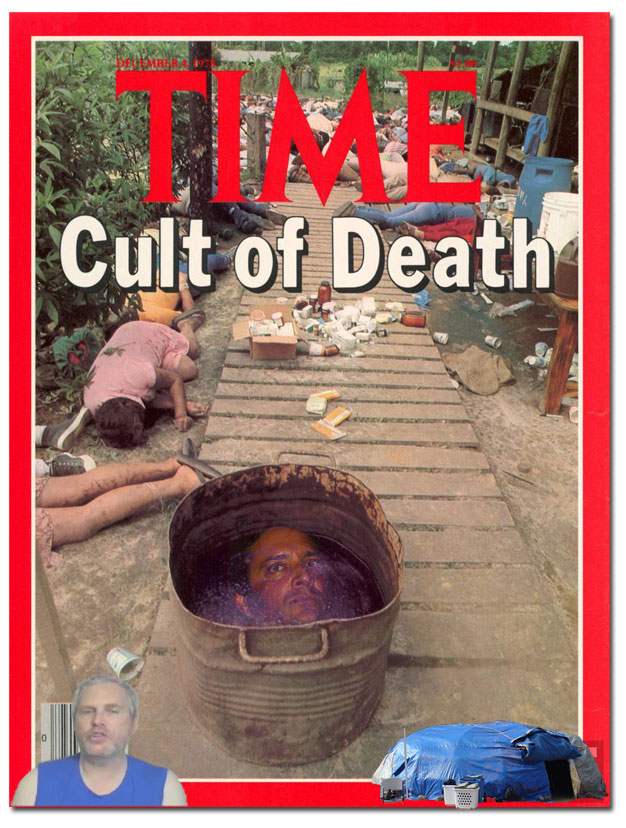 In the central halls of the Doofus League :: evil glasses are being raised {pinkie out} to toast the end of The Salty Droid era. “Boys :: James Arthur Ray’s life ending exploits have delivered us from the righteous retribution we so richly deserved :: Three cheers for murder :: Hip Hip”

Also many pleas from The People :: {small weeping fragile voices} “Droid please don’t abandon us for this new war. What ever would we do? I guess we could cry and cry and cry like a bunch of whiny little bitches … maybe we’ll start that now just to practice.”

I thank the people for caring :: it flatters. And I thank the Doofus League for being so mind blowingly ignorant :: it makes things easier. It’s poor form to blog about yourself :: but it seems some explanations are in order.

1) This blog is not about Internet Marketing. It’s about d-bag :: soulless :: heartless :: putrid :: scummy fucking ConMen. ConMen who are using the power of the Internet to scale their evil in ways that the door-to-door hustler never dreamed possible.

The 21st century ConMan uses the web as a free distribution channel for his lies :: Creates an echo chamber of false friends and testimonials :: and spreads his message to a global audience of lonely/vulnerable souls. The cult-of-personality con :: once requiring the power of a state {think Stalin} or of a large organization {think The Pope} :: can now be pulled off by any heartless d-bag with laptop {think of total empty heads like DK or Maria}.

But a cult-of-personality con has a fatal weakness :: The vigilante truth teller. When the little boy shouts about the Emperor’s nakedness :: Everyone within earshot is suddenly looking at the Emperor’s balls. It doesn’t matter that the boy is just a boy :: and that all the power is concentrated with the Emperor. The truth :: once blurted :: has a nasty habit of hanging in the air like a vegan fart. Which is why the little boy must be tortured :: killed :: and oh what the hell … head on spike. Send a clear message :: when the Emperor puts his balls in your face :: you say “Nice Pants!”

The Droid is built to destroy cult-of-personality ConMen :: in whatever industries they may be found.

2) I’m not done with Internet Marketing you nut jobs! The Internet Marketing ‘Gurus’ are ALL using this cult-of-personality method. Worse still :: they are teaching it as their secret unicorn power for perpetual wealth. Call yourself an expert :: Then charge like you are an expert because you called yourself an expert. Use your real name. Build a ‘personal brand.’ Use your own story as your primary evidence of success.

Massive sins have been committed :: and are being committed. Exposure :: Punishment :: Change :: are all required. The Droid’s fight against IM shenanigans is only just heating up. My network of sources runs wide and deep. My emails get read :: my questions answered {although usually with lies} :: and ya’ll are finally starting to trust me.

Zero chance I’m turning my back on you now.

3) Internet Marketing is James Arthur Ray. Don’t let yourselves believe that there is wide division between Death Ray and the predominant tactics of IM Guruhood. It’s the same subject matter. High pressure tactics to take people for everything they’re worth. Damaged victims are told to blame themselves. Outsiders call the victims ‘fools’ or ‘criminals’ further consolidating their misery. Lives are ruined :: and lives are lost.

The viciousness of James Arthur Ray is just an amped up version of the sickness we were already discussing around here. People can die from this shit :: It’s not a game :: Wake up to the facts ladies!

4) The current situation with James Arthur Ray is a fucking emergency.

Until Ray is locked up and/or isolated from his group :: very bad possibilities remain on the table. Recipe for disaster ::

Are the four dead going to be the crazy end of James Arthur Ray? Or were they just the warning sign that “massive action” was required … with the crazy bad end still to come?

Until the crisis subsides :: hitting Ray from every possible angle is the top priority. It’s not as funny :: or as fun :: but it’s important. Once things cool off :: he drops into the regular rotation and ALL jobs that were started get finished.

So recork your bottles Doofus League :: I’m going nowhere :: And I’m only getting stronger.