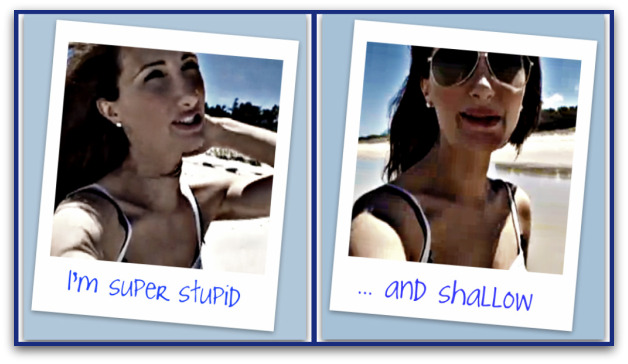 Meet Maria A. Andros{twitter}. She calls herself, “The Video Marketing Queen” {because what’s a nickname without a definite article?}. Maria was a part of the 90 Day Challenge scam run by our old friends DK and Jimmy Davis {it’s NOT too late to get a refund}. Her idiotic lies and dark hearted coquettishness were an aid to Jimmy and DK … and for that I have not forgotten her.

Currently Maria is promoting {and being promoted by} SICK FUCK Not-Doctor Kilstein. She just can’t seem to get enough of his perverted stylings. Sure he makes up psycho lies about his dead children {omg!} :: He victimizes rape victim advocates {sweet sassafras!} :: He stalks and sexually harasses people on the Internet {exposed!} :: But it’s ALL GOOD :: Because Maria only cares about Maria’s current capacity to buy expensive shoes :: Everyone else can drown in the dirty river of her sins.

She’s been kindly {and unkindly} warned to STOP openly associating_ Not-Doctor Dirtbag_ :: But she has not taken heed {probably because “heeding” requires literacy}. FINE BY ME!! It’s about time I added a “lady” to my list of soulless :: hateful :: thoughtless :: heartless :: mother fucking D-Bags.

Just a few years ago Maria was behind a make-up counter {you are forgiven for thinking, “sounds about right”}. But now she’s left the world of thick lash mascara and lip liner behind in favor of coaching YOU in business. Wow! That’s quite a fucking leap :: Me thinks she may have skipped a couple of important steps there. Miss Thing ain’t cheap either {well she’s cheap … but she’s not inexpensive} :: Here’s one of her Frauducts from last year {link} priced at … hold your breath … $3000. OMFG! What the hell is wrong with you people?? At least she knows that it’s a ridiculous price to pay for her LACK of knowledge ::

Yes, I know. I’m not charging enough for this program (and I will probably raise the price in the near future) but I wanted you to have no reason NOT to get it.