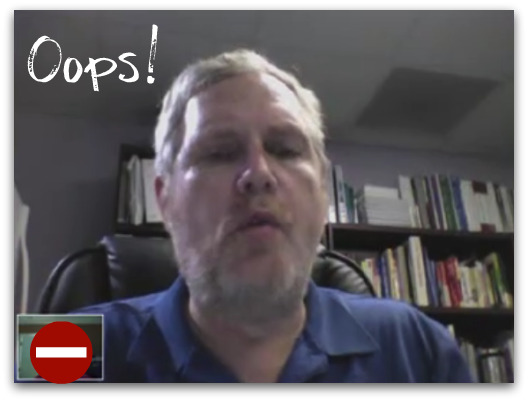 The Droid started writing about Not-Doctor Kilstein just a brief two weeks ago :: I say brief, but in Kilstein years, it’s been an eternity. That’s because he’s a douche :: a loser :: a psycho pervert :: and he’s getting his ass handed to him. Flop little fish :: Flop!

This is a bit complicated :: So let me recap for those of you who are stupid.

>> A ridiculously awesome little robot writes a blog post about Not-Doctor Harlan Kilstein accosting the victims of sexual abuse on the Internet in a jaw droppingly disgusting way. {link}

>> Maybe I also mentioned one or two things about it on Twitter … maybe.

>> Not-Doctor Kilstein starts telling anyone who will listen {and some people who won’t} that I’m just an Internet troll … and that I’ve previously published lies about him murdering his {dead from natural causes} daughter. One of the people he tells is Karin Heibert … herself a survivor of abuse :: And she passes this info on to The Droid like a good Citizen of the Republic.

>> The little Robot that could writes a post about it {link} :: And probably does say one or two {hundred} things about it on Twitter.

Suddenly … as if by black magic … I have a Twitter impersonator. @TheSaltyDroid is less about wit and snark and more about sick perversions, misogyny, and confused homophobia. For some “mysterious” reason he has a near clinical preoccupation with saying terrible things to Miss Karin :: Here’s an unsavory taste ::

{link} For a good time call @karinhiebert She really puts out again and again. Okay so she’s a shriveled up twat but she puts out.

{link} @billhilton does @karinhiebert still charge money for a BJ or does she pay you. She gives droid head to @saltydroid and @vapiddroid

And besides watch me destroy your little friend Karen. Ha ha. Fucktard you are. You left her exposed. Watch the show. & she’s not a citizen.

You brought her in to it. She has a reputation. I have money. I’m going to cause her to wish she never heard of you. Prepare for the show.

Oh the fun is just beginning. You’ve shot your wad. And the best part is, it’s all outsourced. Karin won’t know where it’s coming from. HA

Laughing at you when your whore friend comes crying. You left her exposed dickless.

Next step in this GENIUS plan for self-destruction :: A fake blog intended to defame Karin {link}.

I’d a few ideas about how to catch Not-Doctor Doofus in the act :: But my plans often involve unnatural amounts of patience … and I wasn’t the only one bothered by this obscene nastiness. Someone {more than slightly} displeased by the tormenting of Karin enters the fray with a new Twitter account :: @ez2x1000 {originally called @FallOfTheDroids} :: He only has one thing to say ::

@TheSaltyDroid I have the goods on them both. DM me

Red with Rage {and full up on STUPID} sick pervert @TheSaltyDroid is ready to start DM’ing. Then more bacon is added to the trap … information about the identity of yours truly is dangled in and around his nose area … the stupid fish bites … and an email conversation with thesaltydroid@gmail.com begins.

Now here is the fucking beautiful part that makes me SO HAPPY to be a scam fighting robot :: @Ez2 is chatting with @TheSaltyDroid in Google Chat about the {non-existent} information regarding my identity :: @Ez2 offers up video chat … and god damn idiot Harlan Kilstein accepts! :: 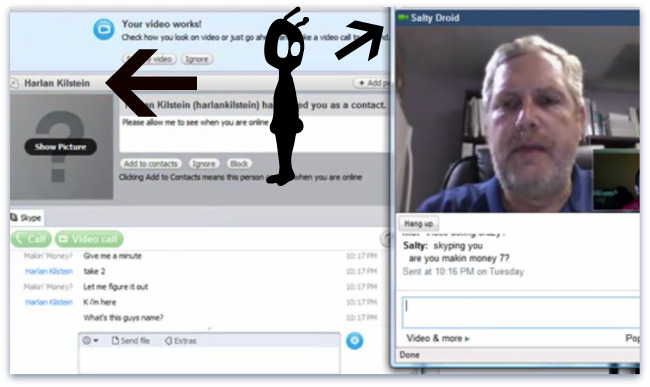 Yeah that’s right … Video! He accepted a video chat invite. **!!VIDEO!! Not only do I have these screen captures, I have the full video chat. I have ALL the emails and Skype messages. I HAVE EVERYTHING!

I will be revealing all the best bits over the coming months in a fashion that will bring maximum shame upon Not-Doctor Doofus {and maximum hilarity to you dear reader}. But for today :: Please just take a few moments to peruse the “copywriting” work of Harlan Kilstein as @TheSaltyDroid. Consider if this is the sort of man you should be doing business with, buying products from, or publicly associating yourself with in any way.

I hope that further shame and exposition will be unnecessary :: And that Not-Doctor Kilstein will be asked to slither back into the swamp from whence he came … but know this … if you are so brazen as to associate with, and promote, this **SICK PRICK **of a “man” … I will be making good and fucking sure that others notice whose side YOU have chosen in the battle of ::

Good vs. *Holy Crap You’ve Got To Be Kidding Me Evil.

Oh, and Not-Doctor Kilstein :: Let me just repeat MY mantra ::

YOU ARE FINISHED ON THE INTERNET!