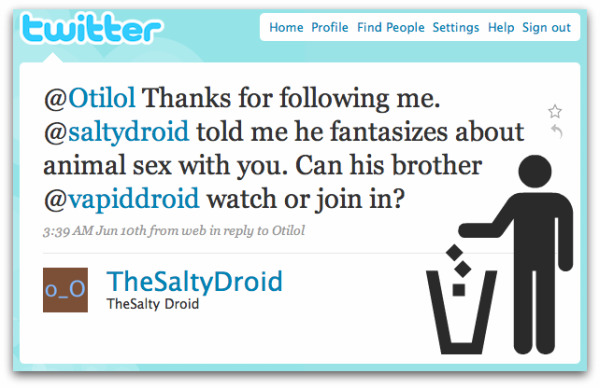 Not-Doctor Harlan Kilstein has destroyed whatever slim chance he had for success on the Internet by PROVING himself to be a vile sexual TROLL. He was caught in the act back in 2005 {link} :: And then again recently {link}. As a part of his ongoing {and lame} effort at damage control :: He has deleted all of the offending “anonymous” Tweets.

Second, obviously my robot ass isn’t going to allow a cover-up. There is no escaping your past on the Internet FatCakes … might as well just face up to it and start looking for a real job {I recommend leaving your unpleasant personality at home}.

{ Tweets sent by Harlan Kilstein under the pseudonym @thesaltydroid between June 8th and June 13th 2009. }