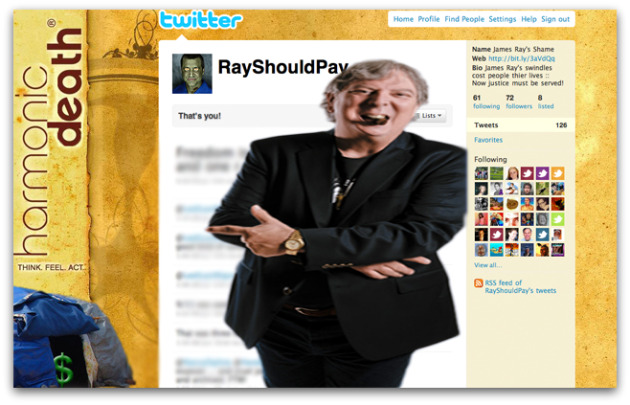 Says Pat O’Bryan … via Twitter … to almost no one.

It’s December 2009 and some cool kids {like Connie :: Burned by Fire :: Duff :: Eric :: not-crazy Li_Kuan} are talking shit about Joe Vitale and James Ray via the Twitters. Oh no you didn’t :: Fat Pat to the rescue!! He won’t have the teats from which he suckles tarnished by truth!

“Look forward to line-by-line critiques of the world’s snarkiest blogs, embarrassing personal facts about the writers, and huge fun for us.”

Pat has had enough of people expending their time and energy trying to enlighten and inform their fellow citizens for nothing but endless fucking grief in return. There are just too many of these rabid sacrificers out there. Wouldn’t the world be a better place if people weren’t free to express their opinions about the value of products in commerce :: and/or the trustworthiness of the sellers of those products? We can’t have people just “saying things” and “complaining about injustices”. What’s next? Actual enforcement of laws long on the books? A ban on unlicensed therapy and psychological practice? Liberty and Justice for ALL? Stop the insanity before it’s too late!

Pat and Joe were getting all hot and bothered because some of James Ray’s turds were smearing their door posts. It was the very beginning of a tragically hilarious {and ongoing} public relations nightmare for Team Scam. During the same period :: Bill Harris was having his lame asshole lawyers threaten Duff with a defamation suit.

Fat Pat O’Bryan was particularly unhappy about the work of Connie and Burned by Fire. He put up this petulant anti-Connie blog …

“ya know- snarking is fun! Looking forward to a long and profitable career at http://whirledburning.blogspot.com/ the Critic Watch blog.”

His “career” lasted one post :: just long enough for him to say …

“I’m a creative entrepreneur who has critics who are also public writers. Most of these critics are totally ignorant of my field, and don’t have the wit to analyze what’s well-done and what’s not …

I know that criticicism comes with success, but… wouldn’t it be fun to critique the critics?

So, welcome to my new hobby. Envision me with my feet up on my desk, a glass of Malbec and a good cigar, Pat Metheny on the studio monitors, and blog critiques flying from my fingers into the internet.”

Holy vomit in my throat Batman :: that is some undeserved conceit.

@CriticWatch to BBF :: continuing to shove foot in mouth …

“fine. what do you do? are you ashamed of it?

you must be ashamed. is it macdonalds? don’t be afraid. we won’t laugh, i promise.

and- just because you don’t have the background or education to understand something doesn’t mean that it’s deceptive.”

Because you couldn’t possibly think that multi-thousand dollar “miracle” coaching :: stolen wish dollies :: or audios for clearing the Gulf of Mexico with your mind were a scam unless you were an uneducated fast food worker. Educated people all know that miracles are real :: and that Joe Vitale is a doctor.

“LOL. I’m rich. I can afford it. And private detectives. And lawyers. Let’s play.”

Oh please! Legal threats in an effort to repress speech :: my least favorite fucking thing. It was the third time he’d done it over a two week period. I’d heard about all of them {natch!}. Now I’ve seen enough … here I come as @RayShouldPay :: an anti James Ray Twitter account that I created to accompany my first Death Ray post. The @RayShouldPay account links to this site :: it has my characteristic punctuation :: photoshopping awesomeness :: and unnecessary profanity … but it doesn’t specifically say Salty Droid … or else the account would be banned {sad but true}.

SD :: Are you rich? Does that count your debts … because debts count you know … JACKASS!

Fat O. :: no debt. Are you still wasting time on things you can’t change?

SD :: We’ll see about what I can change :: and what I can’t. You might want to put your fat head between your knees.

{_quoting Harlan Kilstein’s @CriticWatch equivalen_t} “She has a reputation. I have money. I’m going to cause her to wish she never heard of you. Prepare for the show.”

Fat O. :: you’re noisy, but ineffective. go do something useful.

SD :: You already used that one. It bored me the first time.

Fat O. :: LOL. seriously, after your rousing condemnation what have you actually accomplished?

SD :: I don’t have conversations with useless garbage like you :: I’ll show you though if you keep begging for it.

apparently all you’ve got is a silly pic, a link to somebody else’s blog, and a big mouth. oh. and less than 50 followers.

am I missing something?

SD :: Yeah. You’re missing something. I’m The Droid you thick headed fuck. This is a single purpose parody account.

Fat O. :: lovely. I should know? Zip on over to http://mrfirespyre.blogspot.com and see what i’m pissed about.

Don’t see that I’ve got a beef with you, or you with me. I’m educating a few ignorant dweebs for my own amusement.

SD :: I believe I’ve just put you on notice that your threatening of critics doesn’t fucking amuse me :: Do with that what you will.

Keep threatening them with your lawyers :: and you and Joe are going to trade them for me.

Fat O. :: Sounds like a threat to me. Lawyers shouldn’t make threats online. Identities are so easy to trace on the ‘net.

SD :: And I PROMISE YOU :: I will make you follow through on your limp dick threats :: It will be your last mistake in this business.

Fat O. :: posting the definition of libel was just a warning. the libel stopped.

SD :: Done talking to you chuckles. Go and sin no more.

Thus endeth @CriticWatch :: a few hours later the account was deleted. The threats stopped :: but the sinning did not.

“Mankind is like dogs, not gods — as long as you don’t get mad they’ll bite you — but stay mad and you’ll never be bitten. Dogs don’t respect humility and sorrow.”