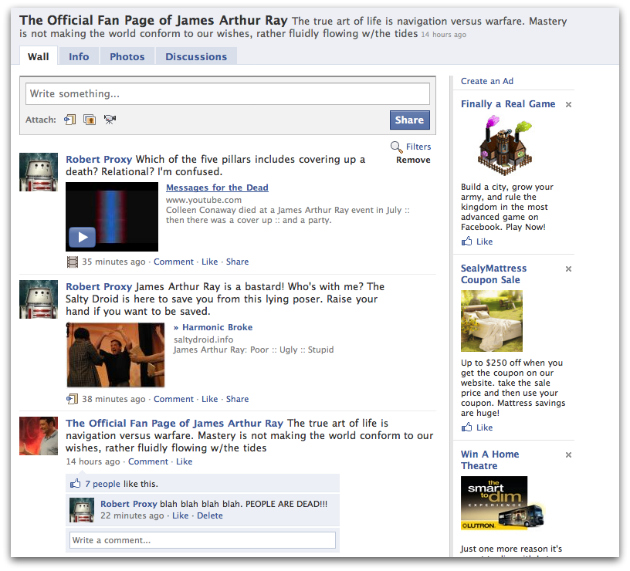 Robert Proxy was the fake man in charge of the fake robot on FaceBook.

The Salty Droid’s fan page on The Facebook was sparsely maintained :: because FaceBook is shit … and because The Droid already learned a hard lesson about building something valuable on someone else’s sell-out platform {*cough* twitter *cough* youtube *cough* bluehost *cough*}.

The death of four people :: and his arrest and subsequent trial for three of the four :: weren’t enough to keep James Arthur Ray from continuing to peddle his bullshit secrets to scientific successfulness on all available web platforms. “The Official Fan Page of James Arthur Ray” :: like many things post-arrest Death Ray … seems to be managed and maintained by Jennifer Horton.

The above appearance by The Droid was made at request {last year}. Robert Proxy’s account was more than a year old :: and these his only comments. Still :: they were more than enough to get the account banned {without notice} in less than 24 hours.

Secretary of State Clinton recently had some good :: fucking important :: things to say about free speech on the webz …

“On their own, new technologies do not take sides in the struggle for freedom and progress, but the United States does. We stand for a single internet where all of humanity has equal access to knowledge and ideas. And we recognize that the world’s information infrastructure will become what we and others make of it. Now, this challenge may be new, but our responsibility to help ensure the free exchange of ideas goes back to the birth of our republic. The words of the First Amendment to our Constitution are carved in 50 tons of Tennessee marble on the front of this building. And every generation of Americans has worked to protect the values etched in that stone.”

Nothing is more important :: no right more fundamental :: than the freedom to openly express dissent against the government. NOTHING. For all its flaws and foibles :: you absolutely … positively … in almost all circumstances … can freely voice your vociferous objections to the actions and/or policies of the United States of America. It is indeed an etched in stone bedrock principle :: and a triumph of human cultural evolution.

If I want to call the Madame Secretary a useless fucking beef cow who is single-handedly destroying God’s plan for the world … then good for me.

If :: on the other hand :: I want to call attention to the useless {or worse} fucking beef cows produced by a subsidy distorted :: mostly secret :: industrialized agricultural system which could never withstand the sunshine of truth … then I will be WHOLLY unwelcome on America’s Internet.