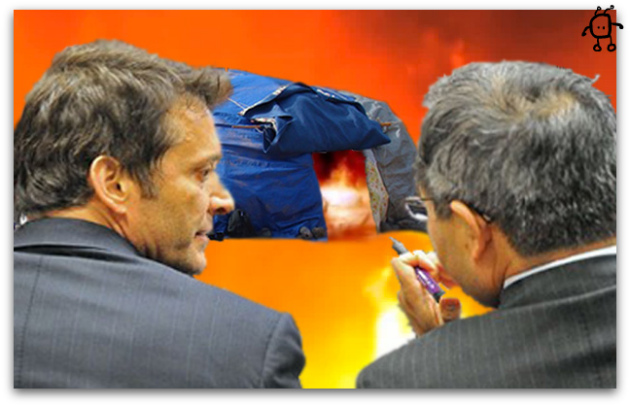 Opening statements in the James Arthur Ray manslaughter trial are set to begin.

Wow … that was quick.

Good for you press. Would hate to see you do any reporting before the motherfucking government takes some official action.

But seriously … I do hate you.

Not Dan Harris though :: he did a pretty a kick ass show about how much Death Ray sucks it :: and asked good questions about Colleen Conaway :: and then he smacked Joe Vitale’s stupid fat face in a moment of righteous anger … so all in all he gets the fake robot seal of approval.

Here he is this morning …

That’s what she said.

The trial is going to be televised on In Session. The Droid was tuning in this morning before the Ray trial started :: the TV heads were having a conversation about Christopher Sutton. Sutton was found guilty in a plot to have his parents killed. His Mom is dead :: his Dad is blinded from bullets to the face syndrome.

Sutton was pissed at his parents for sending him off to a hyper-agressive reform “school” in Samoa where very bad things happened. The kind of things that people don’t want to understand :: or believe in … hardcore cult manipulation tactics :: torture :: abuse :: and fraud for fun and profit.

Meanwhile :: Mark Shurtleff is accepting large amounts of their monies … pretty fucked up.

Anywayz :: The Droid will be covering the specifics of the trial from a frequently updating page {please join me!} …

… now with 80% less snark … and no profanity. Just the serious business of accumulating and redistributing useful information.

Same bitch parade as ever out here in the posts :: but :: to answer a long running question …