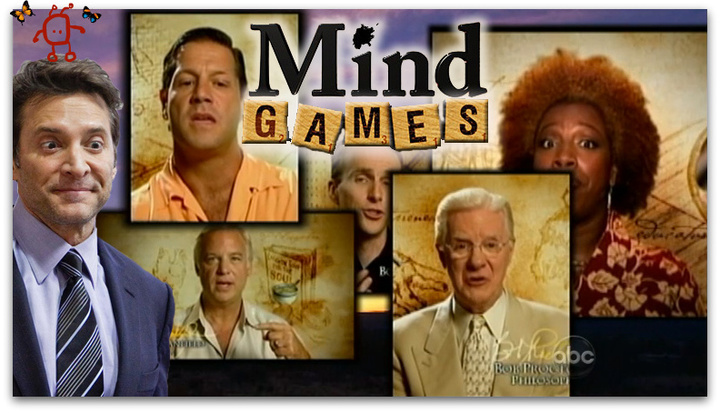 James Arthur Ray must be putting all his attention and intention into visualizing scathingly negative primetime TV specials :: cause he’s Law of Attracted two full hour long specials about his shenanigans in the last month. If I were his life coach {for just infinite payments of $5,995 per month} I would advise him to go back to visualizing negligent “journalism” :: and Oprah. Maybe I’d even advise a vision board … because poster boards with magazine cut-outs aren’t just for 6th grade science projects and serial killers anymore {yes they are!! fuck sake …}.

Mind Games: Self help takes a look in the mirror.

Looking back at self-help in that mirror :: James Arthur Ray … cross eyed … teeth out … herpes … indebted … facing a triple homicide charge :: smirking and cackling about “having it all.”

The ABC story was superior in every way to NBC’s useless pile of cat crap {no offense to cats :: or their crap}. If you didn’t get a chance to watch it :: and you can’t afford a DVR because you WASTE all of your mother fucking money on guru-dumb™ :: then you should go to ABC’s website and check it out {with commercials!}. They haven’t made it embedable because they are ridiculous. Alas.

Dan Harris :: and his cats {no relation to SheShe and Mr. BigglesBottom} :: did a great job of contextualizing the Death Lodge horror within the larger overall horror. Horror FTW! I could complain about a couple of factual errors {like how Colleen WASN’T in the homeless clothes … and how JRI didn’t send anyone to identify the body} but I won’t because I’m not the sort of robot who complains about shit all the time. Keep it positive! That’s what I always say. I mean :: that’s what I sometimes say. I mean :: that’s what I just said and probably won’t ever say again.

The most compelling :: and depressing :: part of the story is in the last segment when several Spiritual Warrior participants tell Harris that they are still in the market for helping themselves to death. Christine Bivins and Brian Something-or-Other actually say that they’d attend another Ray event! I mean seriously? What the fuck? If that doesn’t illustrate the disturbing severity of this problem … then nothing does.

Bivins could have died. When help arrived to the scene of the crime :: she was foaming at the mouth and screaming out James Ray’s name. Her brains and vital organs may have been permanently damaged :: and a couple of years were probably shaved off her lifespan. In the months that have followed :: hard facts and sad stories have revealed Ray to be a sick and uncaring charlatan. Yet she still sees these expensive {in every sense of the word} experiences as positives :: and is ready to get right back in line.

A couple of people who were in that sweat lodge read this blog. Lots of prior Ray event attendees read this blog. I know ya’ll are out there … and you are to be congratulated for sticking it out around here. Facing up to hard facts is hard :: but it’s essential for recovery. I ask you strong few for a favor. Please don’t assume that the other people you met in and around these events are also reading nut-job SkepticBots. “Bad news” avoidance is taught by 100% of these manipulators :: and it’s become dogma for many adherents. Until the spell is broken :: harm is being done. CALL YOUR FRIENDS. Talk to them. Make sure that they are okay. Question their assumptions :: question your own. Sometimes the most positive thing you can do for someone is tell them that they are mistaken. It’s OKAY to think this shit is NOT OKAY.

I leave you with this picture of an ignorant flaming asshole holding up a $40 sticker on national television :: keeping a straight {but puffy} face … 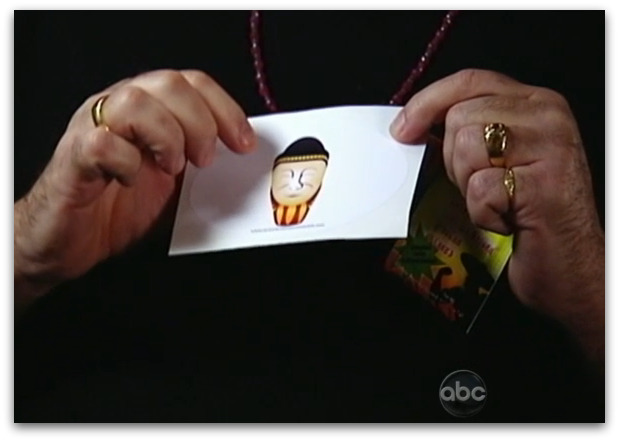 … careful now … don’t look too close or all of your wildest dreams might come true!