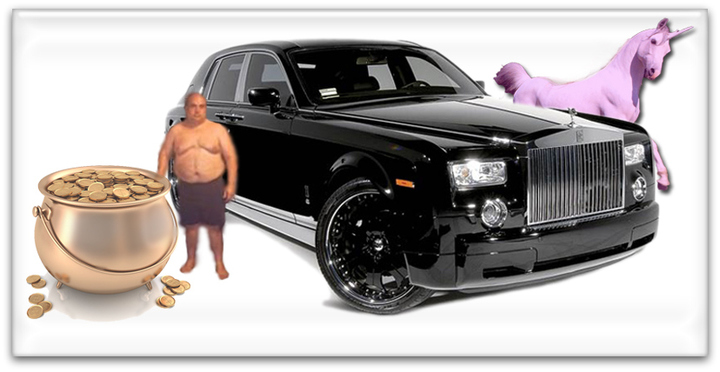 No :: no more fucking Spanish :: that joke is over! All NonEnglish speakers will henceforth be deported forthwith :: unless they are from someplace nice :: in which case they will be forced to stay indefinitely {probably in New Jersey}.

ABC recently aired a special report about James Ray’s evil Mind Games. They couldn’t get an interview with the Telemarketer of Doom himself :: because he was too busy shooting-up and snuggling with Jennifer Horton at 11964 Crest Place. They settled instead for a couple of interviews with fellow The Secret asshole :: and tiny half-a-man :: Joe Vitale.

Joe has one of the most absurdest fruaducts ever conceived of by man {or half-man}. The Phantom Mastermind :: take a ride in Joe’s bonkingly expensive tiny dick car … and pay him $7,500 for the privilege …

And so much more! Because apparently inside a Rolls Royce :: TIME FUCKING STOPS :: and you can squeeze stuff that might otherwise take a lifetime into a single evening’s car ride with an empty headed fuckball. ABC filmed one of these sheeple fleecing sessions :: with “fitness model” Jennifer Nicole Lee. Dan Harris came out to do the interview a couple weeks later :: and was also taken for a ride. Joe could tell the difference between the two events :: because he’s a philosopher genius {link} …

“Being filmed in a Rolls-Royce with a gorgeous fitness model at your side is a lot different than being interviewed by a sharp mainstream TV news reporter.”

When Harris {from the back of the Rolls} asked Vitale about the stupid high price of his ridiculous ripoff :: Vitale non-answered “some people think I should charge more.” In my fantasy world this is where …

Harris slaps Vitale’s fat face as hard he can {it leaves a big red welt}. Then he’s all like :: “Stop the car, I’m getting the hell out of here.” As he gets out he spits on the floor of the car. “You’re a god damn criminal you Mr. PotatoHead mother fucker” :: sayz Dan as he gives Joe the finger with his left hand while tucking his right into his fashionable bomber jacket pocket for effect … some Aerosmith song starts playing …

Of course in real life … nothing awesome like that happened. And after Jennifer Nicole Lee’s expensive night on the town :: she tells the camera she got her monies worth. I’m not so sure she did get her monies worth. Let’s inspectify Ms. Lee’s online business and see what kind of results one can expect after Vitale Masterminding. 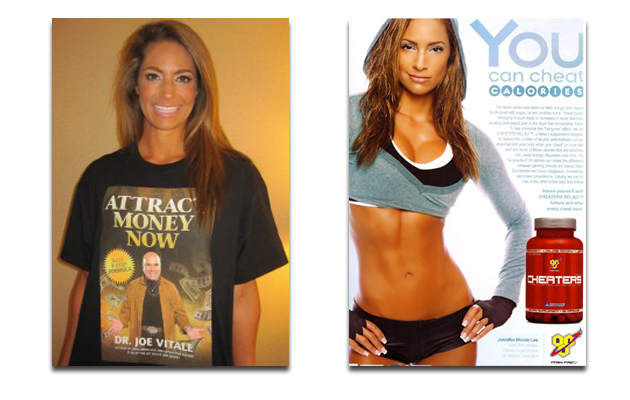 On the left :: Jennifer Nicole Lee as pictured on Joe’s blog … in real life.

On the right :: Jennifer Nicole Lee from her own site in an ad for some diet powder type crap.

“My name is Jennifer Nicole Lee, and I went from fat to fabulous, from poor to rich all from coaching and watching those who succeeded in their own lives, and then applied their trade secrets to my own life.

I recently enjoyed a chance of a life time being coached by Dr. Joe Vitale …

I gave myself the treat to visit with him, and purchased his “Rolls Royce Mastermind Meeting”, which I paid a hefty price of $10,000. And it was worth every penny!”

You think I made that paragraph up :: but no. To sign up for Jennifer’s $500 per hour coaching :: you’ll just need to pre-pay and answer a few questions like …

Do you feel that you are “coachable” and take direction well?

Have you ever been diagnosed with any mild to sever medical conditions that needed special treatment?

In today’s world with endless jealousy, negativity, and competition, do you HONESTLY feel that you deserve a fitness friend, a “sister”, and a support group to rely on when you feel weak and when you cant achieve your goals by yourself?

If you are a mom, did you deliver vaginal or by C-Section?

And what else can you tell me about your vagina before we actually get started with the coaching?

Other testimonials about successful $7,500 car rides include …

“What I learned about myself and my business is priceless. The clarity and direction that you gave me is just what I needed.”

Dr. David leveraged that clarity and direction into … well … nothing basically. Here’s his site :: it’s just a stub.

“In just a few short hours the Master Mind raised my level of awareness and helped me take ownership of the technology I created and has catapulted me forward in taking this idea to completion.”

“At the end of the weekend, I got home ready to take on the world, and … I crashed. Total breakdown. Everything I’d ever cleared out of my life I regressed back to, in spades. Financial, personal, attitude… everything.”

Sounds Great!! :: and the registration on Don’s website has lapsed.

“Even the simple act of riding in the Phantom made me feel like owning one of them could be possible for me too. That’s law of attraction in action baby!”

“Dr. Joe Vitale was amazing… his spiritual touch combined with his business sense provided excitement and guidance. Craig Perrine, Joe’s accompanied guest, also gave us the nuts and bolts of what we needed in order to take our new business to the moon (or in this case, the Universe!)”

And the business that Sarah and Steven are taking to the moon? Gratitude Seashells!! Because nothing says “thank you” like a seashell in the mail. There are a few people to whom I’d like to express my “gratitude” with seashells :: but unfortunately :: this product can’t actually be ordered.

Blah blah blah :: on and fucking on.

Only one person receives any actual benefit from these sessions. That person is a short :: fat :: mean little fuck who knows full well that he’s hurting people.