I don’t really blame the scammers for filing false DMCA claims against me. It’s an exploit that almost always works, so why not use it? What are the chances that the crazy robot is a bored lawyer who is just itching to sue some idiot for exploiting the rules? 100% obviously. Oops. SaltyDroid v. Kilstein :: Could be a case, a comic book, or a wrestling match. It’s got it all!

Also getting off free from blame, YouTube. YouTube has the most reason to be touchy about copyright claims with billions of dollars worth of {waste of time} suits already piled up at the door. When a false claim is filed with YouTube the video comes right down, but you receive instant notification. The notification contains the name of person or company who filed the notice and points you toward clear instructions regarding counter notifications. Of course, the instructions are scary and contain words like “perjury” and “subpoena,” but that’s not YouTube’s fault.

Twitter, on the other hand, has been an absolute speech repressing disgrace. When Twitter gets a false DMCA claim, they suspend your account without notice. Not even some auto notification … just suspension and silence. File a ticket with support, and that ticket is auto closed. They make no effort to notify you of the false claim, or to explain your right to submit a counter notice. Just suspension and incompetent silence. And then this :: 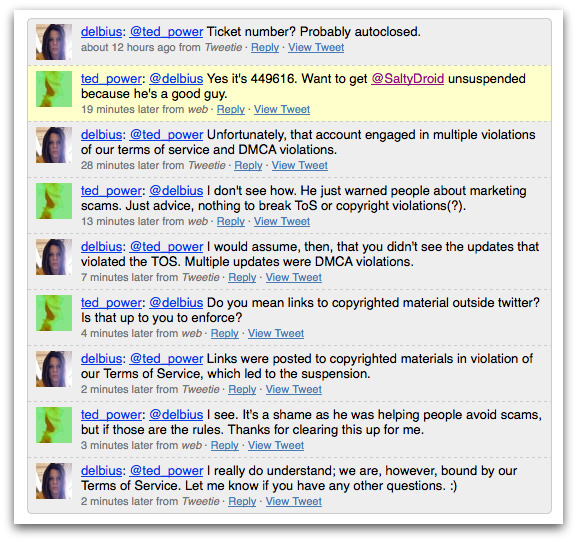 Delbius is in charge of not doing anything about spam, scams, or exploiters over at Twitter {great job so far!}. She also has not the faintest idea how the DMCA works {clearly!}. NONE of the pages or links on my blog are in violation of copyright law. NONE of them! Read my article, or look it up.

In the future, I would think twice before publicly making definitive statements such as “Multiple updates were DMCA violations” :: Uhm, No. NONE of the updates were DMCA violations. And the link on Twitter is one stage further removed from the original source of non-infringement … so it’s not even a remotely close call. Is she knowingly defaming me? Can it be possible that the person in charge of spam at Twitter doesn’t know the difference between a complaint and an actual violation? Defamation or stupidity? Either/Or

Most distressingly :: This means that the head of Twitter Spam {and abuse} actually saw the complaint against the SaltyDroid … from InfoMastery … and it meant NOTHING to her. She doesn’t know anything about Perry Belcher? How is that possible? He has follow spammed more than 100,000 people. He sells a $3000 product which promises to generate massive wealth via Follow Spamming Twitter. While she is pressing the suspend button on my account :: A huge swarm of accounts came online {100s} all the with same logo, tweeting the same message about the glory of Perry Belcher’s new Follow Spamming Money System. His actions are the LEAD cause of follow spam.

Let me make something crystal clear for you Twitter :: IT’S YOUR MESS THAT I’M CLEANING UP. Perry Belcher, convicted last year of an atrocious fraud, exists because you have failed horribly. You allowed him {and others like him} to start following people in mass :: Building false credibility with each click {/script}. You did nothing. Once they had an insurmountable head start … you changed the rules to make the same exploit harder for new users. That gave them a virtual monopoly over the Fake Twitter Cred :: And MILLIONS of dollars have been sucked from the poor and naive thanks to your inattention {or open disregard}. You can see what they are doing just as easily as I can … and you do nothing.

Wake up!:: Put down your lattes :: Put your socks back on :: Spend a few minutes thinking about how grateful you are that your Mommy and Daddy were rich :: And then STOP letting your network be openly abused for disgustingly criminal purposes. Your incompetence is making the whole Internet look bad.