Attack of the Kilstein 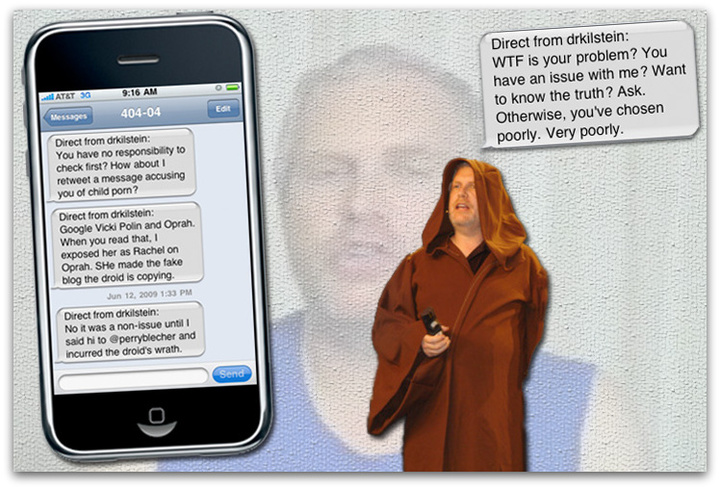 It’s June 12, 2008 and the flames inside of Kilstein’s cave are burning hot with rage {and with something that smells like scorched goat}. The Droid just wrote a post about his epic psycho Internet trolling {link}. It’s a massive blow to his charade :: and he’s working on some damage control.

It seems that almost everyone who Tweeted a link to my post about his Victimizing the Victim suffered some form of personal attack. Never in an open public forum of course :: Because that is a place for sacred pretending. Private messages :: phone calls :: meetings on the outskirts of Boca … “I’ll be sleeveless with a bag over my head.”

This series of Twitter Direct Messages was sent to a brave soul who Tweeted ONE measly link to my post {winner of seven future Pulitzers}. He screen captured them on his iPhone {because they were creepy} :: and now he’s sent them to me :: Twice Brave {that’s two times more than average!}

“WTF is your problem? You have an issue with me? Want to know the truth? Ask. Otherwise, you’ve chosen poorly. Very poorly.”

I like an aggressive opening. Lets people know that you’re bonkers right away :: Don’t make them wait around for it.

Hey Harlan :: My comments are open :: Come and tell me about “the truth” :: I’m interested.

Harlan the Horrible knows that “checking first” would lead to confirmation :: So that is just a threat. A sick, sick, sick fucking threat. Because just being a Con and a Liar isn’t enough for Harlan Kilstein :: He has to dip everything in a can of liquid strange.

“Google Vicki Polin and Oprah. When you read that, I exposed her as Rachel on Oprah. SHe made the fake blog the droid is copying.”

Ah Kilstein :: Five years later and he’s STILL attacking Vicki :: It’s mind boggling to me that ANY of you are still dealing with this Dumpy Beast. The point isn’t what did or didn’t happen to Vicki back in the 80’s you lunatic! The point is that your tone toward a very delicate and painful situation was outright diabolical. People who claim to have been sexually abused can NEVER EVER NEVER FUCKING EVER be publicly tormented. Because maybe :: in spite of any {or many} appearances to the contrary :: abuse has actually occurred. And even if no abuse has occurred :: ALL future victims of ACTUAL abuse see the public humiliation and torment and may decide not to report the crimes that have been committed against them.

Note that Vicki wasn’t the person claiming abuse in the incident Horrible Harlan was commenting on. Vicki was involved as an advocate :: Making the harsh references to her distant past even more disgusting. The Droid tracked down the whole Vicki story before the original post was written {because winners do their research}. I decided at the time :: and here again now :: that rehashing the details of her story would be inappropriate and unhelpful. The story is about Harlan Kilstein in 2009 :: Not about Vicki Polin circa 1980.

Wrong again turd :: on all counts.